Lagos Edition of the Consultative Meetings to Distill the Igbo Position in Distressed Nigerian Federation: My Report & Preliminary Objection of the LNC & ADF

The Lagos edition of the Meetings to distill the IGBO POSITION in distressed Nigerian Union, took place  on February 25, 2018 at Colonades Hotel, Ikoyi. In attendance were Ohanaeze, Nzuko Umunna, ADF, LNC, Aka Ikega, DG of the SE Governors Forum, Chairman of Southeast Senate Caucus, Senator Enyinnaya Abaribe, Labour Minister (from APC) – Dr. Chris Ngige and a wide range of interest groups, Igbo organization representatives, as well as notable individuals. Also present was a former Federal Minister who, after observing the proceedings for a while, simply declared to the audience, when he took his turn, that unless the Igbo first tackles the fundamental question of whether the Igbo want to remain in the Nigerian union or not, every other discussion being held on how to Restructure the polity is a complete waste of time. No same person would claim to be making such an illogical proposition on behalf of the Igbo populace in the face their current disposition to the disputed union of Nigeria. 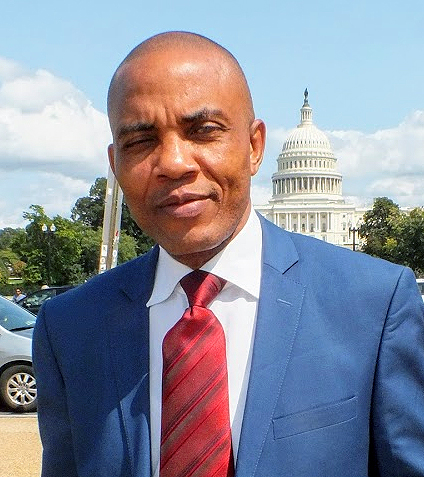 Mr. Tony Nnadi, a Lagos-based lawyer, is Secretary-General of the LNC

He specifically mentioned Tony Nnadi and said that he could imagine what was going on in my mind as our people were busy discussing the Restructuring of Nigeria and amendment of the obnoxious and fraudulent 1999 Constitution instead of addressing the real Igbo question of whether we remain in the union of Nigeria and if so, on what terms. (The LNC posits that this answer can only  be obtained at a Referendum)

The comment of the former Minister stemmed from the fact that the working document which the conveners of the Lagos Meeting tabled for discussion of the day was the same Ohanaeze 2014 Position Document which both the LNC and ADF had dismissed as grossly inadequate for engaging the 2018 realities and concerns of Ndiigbo.

There were issues of formal invitation of stakeholder groups into the consultative processes which the Task Committee Chairman, Senator Enyinnaya Abaribe, undertook to ensure, ahead of the Enugu edition of the meetings.

Prof. Uzodimma Nwala told the audience and conveners, point blank, that it was tantamount to living in a distant and outdated past era for one to premise the discussion of distilling the IGBO POSITION on a 2014 National Confab document which merely suggested what amendments to the 1999 Constitution the Igbo would want to see.

When the conveners insisted on continuing the meeting based on that 2014 National Confab document, Prof. Nwala insisted that the ADF be put on record as rejecting that line of approach for working out the Igbo Position in Nigeria. Next, he and the ADF team, got up to storm out of the meeting but were prevailed upon to stay by the conveners after several minutes. In the boisterous interregnum, mood of the audience showed that most people were beginning to understand the true nature of the quagmire in which the Igbo find themselves in Nigeria.

As I already indicated in my memo the day before this meeting, I spoke for only about 5 minutes and on behalf of the LNC. I raised the preliminary issues relating to whether there is indeed a Nigerian union still in place – a question which must be engaged before going into the secondary consequential question of the terms of the union which was where conveners of the Lagos meeting had commenced the discussions from.

Put differently, the LNC and ADF were both raising preliminary objections to the procedure adopted by the Task Committee and conveners of the consultative meetings which takes for granted and as a given that our people want to remain in Nigeria and therefore, limiting the entire IGBO POSITION discussion to the type of Restructuring Igbo will seek. Preemptively ignoring the loud and clear demands for Self-determination emitting from Alaigbo and Igbo Diaspora is more like telling the Igbo populace to “Shut up. We know what is best for you and it is one unitary Nigeria under the 1999 Constitution. But since you are complaining we will ask our friends (in Arewa North) to Restructure a few things so that the imposition becomes a little more palatable for you.”

I had likened the disputation under contention to the procedural and substantive relationships, between the MEMORANDUM and the ARTICLES OF ASSOCIATION of a company, in which the MEMORANDUM is first made out by the Subscribers and Promoters/Shareholders, to create the company and define the enterprise it will be undertaking, while the ARTICLES OF ASSOCIATION come next to define the internal relationships and procedures between and amongst the Owners/Shareholders.

For the avoidance doubt, (please note the point about to be made now as it will be the overarching consideration for the LNC in its engagement with the entire Igbo position distillation undertaking), LNC’s main contention is that what the Memorandum and Articles of Association are to a company is what the Constitution is to a country.

The Preamble to the 1999 Constitution, just like the Memo and Articles of Association of a company, is in the two distinct parts:

(1) Creating and Defining the Country and

(2) Defining the Internal Power/Responsibility Relations between and among constituents.

Referring the audience to that Preamble of the 1999 Constitution, which begins with the claim “We the people, having firmly and solemnly resolved to live in unity as one indivisible and indissoluble nation…”  and goes on towards the end to conclude with another claim, “do hereby make, enact and give unto ourselves the following constitution”.

The paradigm parallel i drew between the two is that the first part of the Preamble clearly creates,  establishes and defines the country Nigeria, as a voluntary association of We the Igbo, We the Ijaw, We the Yoruba, We the Tiv, We the Fulani, et cetera (that’s what “We the people” there means), submitting our lands and our peoples, into the agreed Nigeria enterprise, after we’ve had met and solemnly resolved to live in unity as one indivisible and indissoluble nation. This is just as the Memorandum of the company creates, establishes and defines the company when it declares that the named/listed Subscribers now form themselves into a company to be called XYZ LTD.

The closing part of the Preamble which reads: “Do Hereby Make, Enact and Give Unto Ourselves, the Following Constitution,” means that the constitution being enacted by our collective volition and action, is merely to define and spell out the details of the terms of our mutual coexistence and relationships inter se as one country by the venture name “Nigeria”, we have voluntarily created after we had first agreed, just as the Articles of Association of  a company spells out the details of the venture relationship among the Subscribers and Shareholders.

Another paradigm parallel concomitant to the Memo Article/Constitution juxtaposition is the question of Amendments as the cure to the grave complaint that “We the People” never met, never agreed upon, made, enacted nor gave ourselves the 1999 Constitution, as claimed in its Preamble. Acceptable remedy to this egregious falsehood, amounting to a forgery, in which our collective signatures were put on a document that enacted our damnation, does not lie in “Amendments” to be carried out on the fraudulent document by the National Assembly, being itself a creation of the impugned 1999 Constitution.

1999 Constitution was written under the direction of General Abdulsalami Abubakar who, subsequently, put the document into effect through the issuance of Military Decree No 24 of 1999. Nigerian constituents, including Ndiigbo, were never consulted on this matter.

Going by the company/country analogy, any suggestion of “Amendments” as the cure to that grave complaint by the defrauded constituent components of Nigeria will be akin to insisting that the hired management staff of a company could validly usurp the right of the Owners/Shareholders of a company, whose Memo and Articles had been fraudulently re-written by a rogue management team. Acceptable remedy must commence with remaking the owners’ dislodged Memo and Articles in order to first recover the ownership and control of their hijacked enterprise.

The 3 Arms of Government, of which the National Assembly is one, are exactly in the same position as the hired management team of the enterprise, Nigeria, (the hiring process is what we call elections) and so, cannot begin to lay claim to the exclusive right to rewrite for us the forged Memo and Articles (Constitution), as the National Assembly of Nigeria is currently doing. Whether this malfeasance is out of ignorance or mischief, even amidst the very vehement protestations of the defrauded owners of the hijacked enterprise – being “We the various peoples of the constituent components of Nigeria….” as we saw in the OPC campaigns, the 2017 Ibadan Declaration, the raging Biafra and Niger Delta agitations and the April 27, 2015 Solemn Assembly of the indigenous peoples of the Lower Niger in Port Harcourt.

Their methods may differ but they are all, by their actions, repudiating and  rejecting the fraudulent 1999 Constitution.

Such a brazen usurpation by the hired management team, (the National Assembly), is patently criminal and is of great concern to the LNC that federal legislators from Eastern Nigeria are participating, almost gleefully, in that criminality.

Government is a Continuum

What happened to Nigeria since 1966 was that the hired management team (all administrations since the military intervention of 1966) hijacked the enterprise (i.e. Nigeria) threw away the original Memo and Articles of the Subscribers/Shareholders being the 1963 Republican Constitution of Nigeria, along with the 4 constituent regional constitutions upon which the Federation of Nigeria was incorporated. The authentic constitutions were then replaced with a series of military decrees between 1966 and 1999 – consolidated by fraud and forgery into what we now call “the 1999 Constitution” (a wholesale carryover of the preceding 1979 edition).

The LNC and the rest of the Eastern Nigeria Self-Determination Collective, together with the Movement for New Nigeria (MNN) alliance partners, insist that an end must now be brought to this long-running criminality which has rendered Nigeria itself to become a “Criminal Enterprise”, to the extent that the union is now being operated on the basis of the Fraudulent 1999 Constitution, imposed by the Sokoto Islamic Caliphate through military fiat, in utter negation of the Self-determination rights of the forcibly integrated peoples of Southern and Middle Belt Regions of Nigeria since 1914 by the British mischief we call Amalgamation.

Let it be known to all that, in this difficult discourse on what will be the Igbo Position, the LNC will stand very firmly with our traumatized people in our just desire for Self-determination and will, therefore, not accept the usurpation of the constituent powers of the sovereign peoples and nationalities of Nigeria, including the Igbo, by the  monstrous suzerainty called “the Federation of Nigeria” on behalf of which the National Assembly acts in the nauseating and illicit Amendment gambit.

In this wise, the LNC welcomes and adopts the stance of Alaigbo Development Foundation (ADF) as addressed to the Senator Abaribe-led Task Committee overseeing the debate of what the IGBO POSITION should be in the disputed and distressed Nigerian “Federation” of 2018.