Major Gideon Gwaza Orkar was a military officer and revolutionary who staged a coup against Gen. Ibrahim Babangida on Sunday, April 22, 1990.

It was a day the fabled security network of the self-styled military president was demystified.

Orkar’s men seized the Federal Radio Corporation of Nigeria (FRCN) station in Ikoyi, the various military posts around Lagos and the Dodan Barracks, Lagos, the military headquarters and presidential residence. When the barracks were attacked, the rattled Babangida was obviously within the premises, but he managed to escape through the back route.

Apart from Orkar, the other prime movers of the coup were, Lt. Col. Tony Nyiam and Major. Saliba Mukoro.

In Orkar’s coup broadcast (https://goo.gl/Tehrp3), the courageous soldier, amongst other things, called for the consideration of an excision of five Northern states from the then 21 state structure of the country.

Hence, the coup’s broadcast was said to be emphatic in the sense that it was done on behalf of the people of Middle Belt and Southern part of Nigeria.

The reasons ‘’were to stop Babangida’s desire to firmly install himself as the country’s life President at all costs, the need to stop intrigues, domination and eternal colonisation of “the Nigerian state by the chosen few” and the need to lay an “egalitarian foundation for thermal democratic take-off of the Nigerian State.”

Among Babangida’s sins, according to Orkar, were the president’s appointment of himself as Minister of Defense, putting under his direct control the State Security Service (SSS) and the deliberate manipulation of the Political Transition Programme.

The coupists said the administration had been the major cog in the wheel of progress of the country.

However, the coup was crushed by officers loyal to the Babangida regime. It was gathered that Orkar could easily have escaped, but he refused to attempt to do so.

Late Gen. Sani Abacha whose voice was one of the first set of officers to be heard in a nationwide broadcast after the plan was aborted said ‘’ all the disgruntled and ambitious military officers behind the plot, who constituted themselves into National Ruling Nuisance, have been arrested.’’

Indeed, quite a number of coupists were rounded up. According to the government accounts, over 700 people were arrested and interrogated while some were subsequently tried by the Special Military Tribunal.

Facts which later emerged from the tribunal proceedings showed that some middle-level officers and men of the armed forces stormed Dodan Barracks, Lagos, the then seat of government in the early hours of April 22, 1990, with heavy bombardment in an attempt to unset Babangida’s government.

Babangida managed to escape with his family, but not without losing his aide de camp (ADC), Lt. Col. U.K Bello and several other soldiers on both sides.

Later, the AFRC inaugurated a military tribunal headed by Gen. Ike Nwachukwu to try them.

The trials were in batches. After the first batch was court-martialed by the Major Gen. Nwachukwu-led Tribunal, some officers and men were sentenced to death. 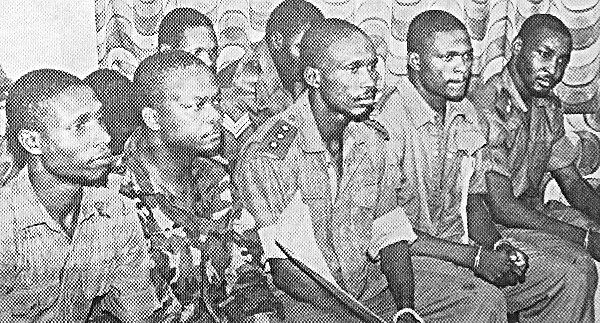 Major Gideon Orkar (2nd from left) and his co-conspirators seated at a military court-martial headed by General Ike Nwachukwu. (The faces of courage await their fate)

Some got jail terms while 31 others, who were freed by the tribunal, were ordered to be re-tried by another tribunal headed by Major. Gen. Y. Y. Kure.

Thirteen serving and ex-servicemen and two civilians were freed but dismissed.

The then Chief of General Staff, Admiral Augustus Aikhomu, in a subsequent broadcast on the outcome of the trial said the plan to overthrow the Babangida government was first uncovered in 1987. He claimed that three officers, including Orkar, allegedly implicated at the time, were arrested, cautioned and subsequently released.

The government said the men, however, regrouped and met in January 1990 to conclude the details of their plan.

Aikhomu also named a businessman, Great Ogboru as the financer of the attempted coup, saying that it was discovered during the investigation that Ogboru had committed about N10m to finance the plan and execution of the coup plot.

Ogboru had, however, taken to his heels and fled the country.

Like any other military court, the coup suspects were taken to the tribunal in chains. They were charged and given copies of the charges preferred against them. They were also given defense lawyers in line with military tradition.

By the time the tribunal concluded its assignment, it was certain that those found guilty would be executed.

At the beginning of the investigations, about 863 military officers, soldiers, and civilians were arrested in connection with the coup attempt. They were thoroughly investigated and subsequently tried by a military tribunal as provided by law.

751 persons comprising military officers, soldiers and civilians have been released to go back to their jobs, with a few being compulsorily retired from service.

The AFRC has met and thoroughly considered the findings of the military panel set up to investigate the abortive coup, the judgment of the SMT which tried the coup suspects and the recommendations of the Joint Chiefs of Staff and the appeals lodged by the appellants.

After two days of deliberation, the AFRC discharged and acquitted about 764 and ordered the re-trial of 31 persons. Besides, the council convicted and sentenced nine persons to various jail terms while 42 persons were found guilty and sentenced to death by firing squad.

Orkar and others were later executed following the confirmation and approval of their sentences by the Armed Forces Ruling Council (AFRC).

Some coup suspects were also declared wanted for the part they played during the unfortunate incident. Among them were, Lt. Col. Nyiam, Great Ogboru, Major. Mukoro, Lt. Emmanuel Okekumatalo, Major. T. O. Edoja, Major C. O. Obahor and Mr. Alex Aigbe, among others. They have since been granted a pardon.

A major actor in the coup plot, Nyiam, in a media interview he granted and which was published later in the defunct African Concord Magazine edition of June 24, 1991, said “He (Orkar ) was like Chukwuma Nzeogwu, interested in Nigeria’s salvation. He, like Nzeogwu, recognized the hegemonic tendencies of the clique that has its roots in Sokoto.”

Nyiam said if the coup had succeeded, the group had targeted some key Nigerians for appointment into an interim government which was to ensure a proper transition programme.