Here’s a quick question: what happens when a lot of people are producing more and more of a commodity, but fewer people want to buy it? It’s economics for preschoolers. You don’t even need multiple choice answers to guess right. But here’s another, increased difficulty, question: whose fault is the current oil price crash?

If this were a multiple-choice question, the answers would look something like this: a. Saudi Arabia; b. Russia; c. The United States; d. The coronavirus outbreak; and e. All of the above. The correct answer, of course, is (e), if we get past our personal preferences for a culprit. But how much did each of these contribute to the crisis?

Now that’s a harder question to answer. Saudi Arabia used to be the world’s largest oil producer and, more importantly, the world’s cheapest oil producer. This has given the Kingdom a lot of leverage when it comes to controlling oil prices. Prices went where Saudi Arabia wanted, either by shutting off the taps or turning them up to gushing.

It was the latter that the Kingdom did in 2014 when the U.S. began to make its oil presence felt internationally. The point was to stifle this emerging competition and retain the top spot both in production and clout. Unfortunately, it didn’t work out quite as planned. Prices tanked from over $120 a barrel to below $30 and everyone suffered, including Saudi Arabia itself.

Now, the Kingdom has, once again, turned the taps on to gushing. This time it wants to punish its partner in price control, Russia, for its refusal to cut a bigger chunk of its production to support prices, although some believe it has also had enough of the U.S. shale oil and is targeting it, too.

Prices, not known for being surprising, are reacting in the only way that can be expected. So, Saudi Arabia fired the first shot in what everyone is now calling an oil-price war. But did it really? Saudi Arabia announced its plans to raise oil supply to 12.3 million b.p.d. from less than 10 million b.p.d. on the Sunday after the OPEC+ meeting in Vienna did not take place because Russia singularly refused to cut deeper.

According to calculations by OilX, there are about 750 million barrels of oil in the world stored both on land and offshore. The oil analytics firm notes that this could rise to 1 billion barrels, according to some analysts, in the current demand and supply situation. 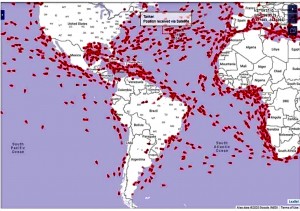 An estimated 750 million barrels of crude oil are in ocean supertankers and storage facilities worldwide. With continued economic slowdown the stockpile shall soon exceed one billion barrels. The glut in this commodity portends prolongation of depressed prices for the foreseeable future.

It’s anyone’s choice who is most at fault. The facts remain: unless something changes quickly – and it won’t be the world’s epidemiological situation – oil is headed lower. On the plus side, this would help the economies hardest hit by Covid-19 to recover a little bit more easily.

Nigeria sticks out like a sore thumb in all this simply because crude oil export is the sole income earner for this West African country with a population of 200 million inhabitants. Without any savings in hard currency to speak of, Nigerians are now compelled to sell their currency, naira, at highly devalued rates to procure hard currency required for international transactions. Despite having earned nearly a US$trillion from crude oil export, Nigeria depends entirely on importation to meet the consumer needs of its 200 million citizens. Before now, the earnings from crude oil export were swapped to pay for the importation of everything – from foodstuff to feed the enlarging urban population to luxury items for the rich few in the society.

The full significance of the unanticipated shortfall in foreign income in today’s Nigeria can only be imagined. That’s why this YouTube video by ‘Dipo Adesina ought to be watched and reflected upon by as many Nigerians as possible. In a recent OpEd in many online social media, one Patrick Okigbo III alerted his fellow Nigerians about an economic tsunami that is poised to land on Nigeria’s shoreline (https://bit.ly/34UiVmP). Mr. Okigbo expected his reading audience to use their tongues to count their teeth. Mr. Adesina prefers to use this video format to remind Nigerians about the fate of the Zimbabwean dollar, which began at a valuation of US$1.47 in 1980 and sank to where one must have as much as a trillion local dollars to buy US1. In practice, the Zimbabwean dollar is a worthless currency today.

With the anticipated continued downturn in the global crude oil prices, Mr. Adesina fears that what happened to the Zimbabwean dollar might become the fate of Nigeria’s naira. His counsel to fellow countrymen is well taken. In the short run, he alerts large holders of naira cash to safeguard their funds’ value by converting whatever they have into hard currency. Going forward, he also suggests investing in businesses that are relatively devaluation-proof like real estate or land acquisition etc. For the long haul, Mr.  Adesina suggests a refocus back on agriculture, now that the crude-oil era has run its course. He reminisces the immediate post-Independence 1st Republic when agriculture powered the spectacular development of the era.

By asking for a return to an agriculture-driven economy, Mr. Adesina is actually demanding a radical departure from the crude-oil inspired command economy of today’s Unitary Nigeria. By implication, he is asserting that life shall be hellish in post-Covid-19 Unitary Nigeria if the status quo remains. The path forward is to reconfigure a future that restores regional control which shall, in turn, return our part of the world, once more to increased productivity led by agriculture.