My Concern Is the Future of 200 Million Nigerians, Not Nigeria That Had Died in 1966 – Tony Nnadi of LNC

On January 17, 2019, the Secretary-General of the Lower Niger Congress (LNC), Mr. Tony Nnadi, made a special presentation at the National Press Building in downtown Washington, DC at a special press conference convened by the Mission Africa International regarding the incessant murders and mass killings of Christian indigenous populations of Nigeria, especially in the Middle Belt Region of the country.

The coalition named Mission Africa International encompasses leadership groups from Christian denominations determined to put a stop to the spree of well-targeted murders of innocent Nigerian Christians because of their religious beliefs. Participants in this group had played leading roles in stopping the genocide that took place during the Southern Sudan war for independence. 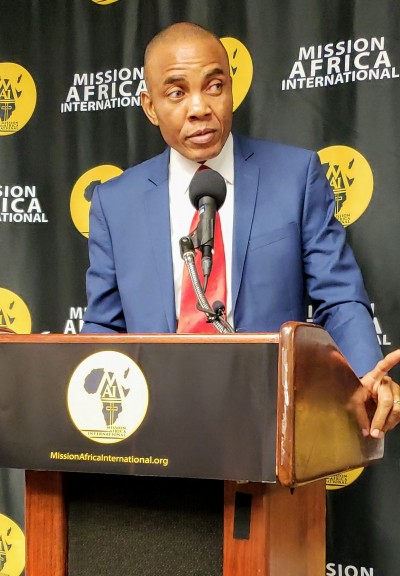 The deliberative conference reaffirmed the group’s resolve to press the US Congress for the immediate establishment of a Special Envoy for Nigeria by the US Government as the only means to stop these senseless killings by an expansionist Islamist militia spearheaded by the Fulani aristocracy. As a global superpower, the US government can act preemptively to checkmate the entrenchment and spread of radical Islamist nationalistic fervor in the entire West African sub-region. To accomplish this at least cost, it behooves the US Government to prioritize the call for creating a Special Envoy for Nigeria. This special diplomat shall be empowered to interface and interact with the country’s stakeholders who have already worked out a road map for stabilizing the Nigerian geopolitical and in turn, the West African sub-region.

Mr. Nnadi and other Nigerian stakeholders have been invited to make presentations before the Congressional Sub-Committee on Africa during its scheduled upcoming public hearing on Nigeria. The congressional hearings are presently suspended pending the end of the partial shutdown of the US Federal Government. The Mission Africa International parley and the press conference by an allied group, in a preceding event held at the same venue, can be said to be dress rehearsals for the scheduled presentations before the congressional sub-committee in the near future.

The LNC scribe’s elucidation of the underlying cause of Nigeria’s seemingly insurmountable dilemma was well-received by the Christian leaders who constituted the audience. There was unanimity in making an immediate push to get the incumbent US administration to act in America’s strategic interests by stopping the forces of radical Islam from the full implementation of their sinister agenda to destabilize and therefrom, take control over Africa’s most populous country and its abundant natural resources through violence. Such destabilization shall surely trigger an unprecedented deluge of refugees from West Africa into the US and elsewhere in North America and Europe.

Appointment of a Special Envoy for Nigeria by the US Government, at this juncture, shall go a long way to nip this looming disaster in the bud.