The Constitution Review Exercise Set Up by 9th Assembly Is an Exercise in Futility, a Journey to Nowhere & An Affront on the Constituent Components of Nigeria.

(Being a statement by the LNC/MNN Joint Secretariat, February 6, 2020 in reaction to the setting up of a 57-member Constitution Review Committee by the leadership of the 9th Assembly)

In the face of the countrywide wholesale repudiation of the 1999 Constitution as the basis of the Nigerian Union, and trenchant demand for the grand reconfiguration of the damaged constitutional basis of Nigeria which has assumed the loose description “Restructuring”, the recurring seasonal ritual of constitutional review by the successive leadership of the National Assembly is simply for the purpose of kicking the can further down the road and more importantly, to yank off a few billions from the bleeding treasury of Nigeria.

For the avoidance of doubt, the legislative mandate/duty of the National Assembly members does not include constitution making which requires constituent powers that are vested EXCLUSIVELY with “We the people…” as an incident of their sovereignty. It is worse when the 1999 Constitution they seek to review has been repudiated and rejected countrywide for being a fraud and an imposition.

Let those who wish to research or understand this assertion look up Section 14(2)(a) of the so-called “1999 Constitution” which states that:

“Sovereignty belongs to the People, from whom the Government, through this Constitution, derives all its Powers and Authority”.

Accordingly, anyone who does not know that the National Assembly does not have the constituent powers to make or remake the Constitution of Nigeria is simply ignorant on the subject, whether such a person is a Senior Advocate of Nigeria (SAN) or a Professor of Law.

The countrywide push to take down the rogue 1999 Constitution and restore the hijacked sovereignties of the constituent components of the failed Nigerian union for fresh protocols, is now heading to the Constitutional Force Majeure threshold that will precipitate the TRANSITIONING that will midwife the emergence of fresh protocols, anchored on the unfettered self-determination rights of the constituent components of the defunct Federation of Nigeria.

Those in the National Assembly who now pretend that they are the new custodians of our sovereignties simply because they were elected into the National Assembly, should realize that they are, by that pretense, aiding and abetting the treason already committed by those who first hijacked our sovereignties by imposing the fraudulent 1999 Constitution. They are by that act of abetting the original sin, committing treason against the rest of us and let it be clear to them that when things will snap for Nigeria, CONSEQUENCES WILL ATTACH for their current role. Let it also be made clear that whatever the 9th Assembly does in the so-called “Constitution Review” they are initiating will go down with the 1999 Constitution when it is rejected on the streets by the constituent components of Nigeria currently choking under it. 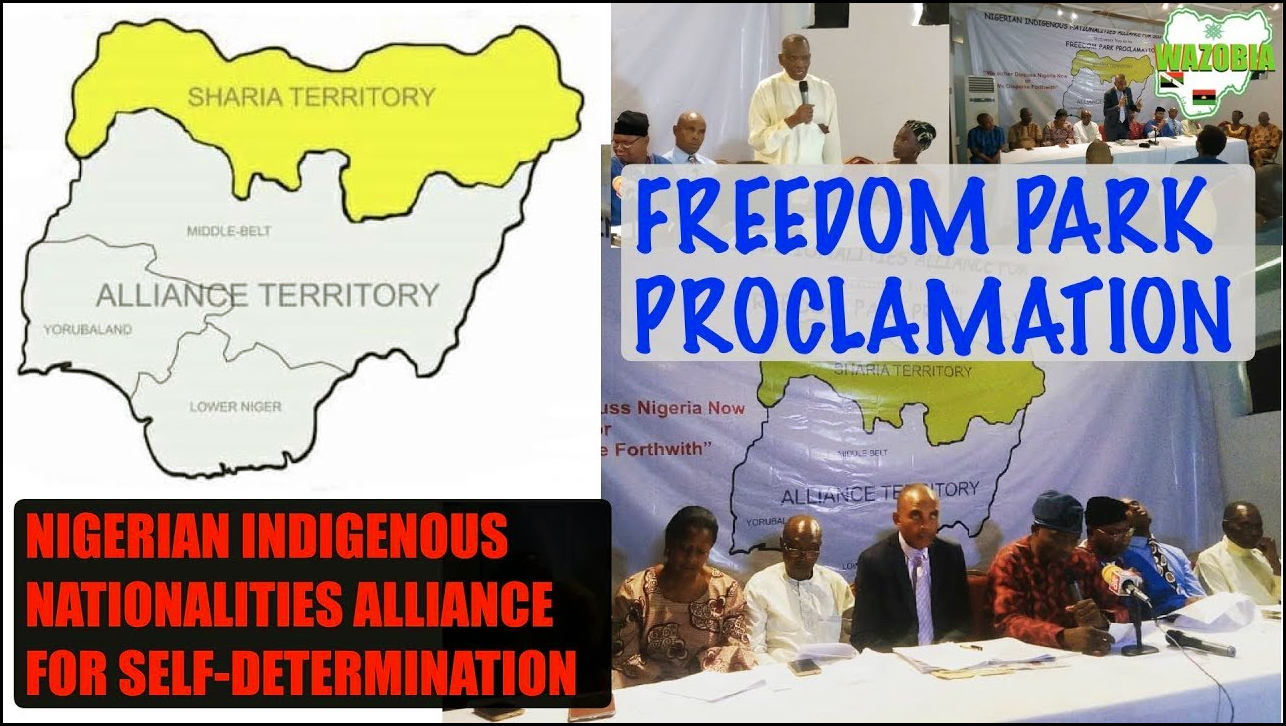 The Freedom Park Proclamation of December 11, 2018 by the Nigerian Indigenous Nationalities Alliance for Self-determination (NINAS) defined the solidarity of Southern & Middle Belt Nigeria to checkmate the arrogance of the Sokoto Caliphate in Nigeria’s political economy.

What the situation demands is akin to what South Africa did in 1990 to ease itself out of the Apartheid constitutional order. The first order of business is for the Government of Nigeria to accept that the 1999 Constitution has to be jettisoned wholesale and immediately. Then a Transitioning is put in place to midwife the distillation of successor constitutional protocols.

The fuller articulation of the exact processes of that Restructuring by the LNC and its MNN alliance partners are contained in the November 16, 2018 “OPEN MEMORANDUM ON RESTRUCTURING TO PRESIDENT MUHAMMADU BUHARI BY THE LNC/MNN ALLIANCE”

Reported at page 5 of the Guardian Newspaper of November 18, 2018 and accessible from the link below: