NCEF Aligns Itself With Stance of Ethnic Nationalities of Southwest, Southeast, Southsouth & Middle Belt Zones on the Path Forward

The National Christian Elders Forum (NCEF) was shocked to read in the news that the President of CAN, Rev. Dr. Samson Olasupo Ayokunle, with some CAN Officials and Christian leaders paid a “congratulatory” visit to President Muhammadu Buhari on his purported victory in the 2019 presidential election. The NCEF wishes to state clearly that such a visit is “sub judice” as the determination of who won the 2019 presidential election is still in court. It is, therefore, premature and presumptuous for anyone to congratulate President Buhari for “winning” an election that is contested in court.

The NCEF wishes to state that the congratulatory visit to Aso Villa could not be in the interest of Nigerian Christians who daily bear the agony of thousands of their brethren being killed, maimed, displaced and marginalized in the jihad launched in the northern parts of the country. It is the well-known indifference of the Buhari Administration to the murder of Christians all over the country that astounds everyone. This indifference has led many, including foreign observers, to conclude that the Buhari Administration is complicit in the genocide that is taking place in Nigeria. 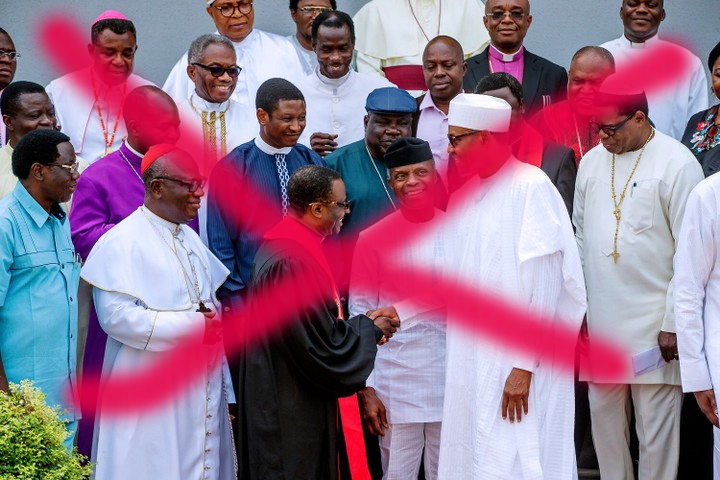 CAN delegation’s photo with President Buhari crossed-out with RED brush to emblematize the blood of thousands of innocent Christians who have been murdered in cold blood in their own ancestral villages by the Islamist Fulani herdsmen terrorist militia.

The action of the CAN President, Rev. Samson Olasupo Ayokunle, is a further confirmation of all the protests and petitions of NCEF in 2018 querying the faithfulness of Dr. Ayokunle to Christ and His Church. In its 2018 Report titled FACTORS HINDERING CHRISTIAN POLITICAL CONSENSUS FOR 2019 ELECTION, the NCEF provided irrefutable facts that Rev. Ayokunle deliberately frustrated Christian political consensus in a country in which religion has become a major factor in politics. With this ill-advised congratulatory visit to President Buhari, it should be clear to every Christian of good conscience that Rev. Ayokunle is running CAN as an appendage of APC which has proven by its religiously biased appointments and policies that it is primarily a religious party that is to the disadvantage of Christians whom Rev. Ayokunle claims to be representing.

It would be recalled that during the general elections, Rev. Ayokunle presumptuously deployed a 1,000-man CAN Election Observers team to monitor the voting nationwide. The action was presumptuous since CAN does not have the constitutional responsibility of engaging in politics. Christian leaders deliberately established the Christian Social Movement of Nigeria (CSMN) for this purpose in 2001 as the socio-political arm of the Church. Nonetheless, after observing the elections, the 1,000-man CAN Election Observers are yet to release their report before CAN rushed to congratulate one of the contestants. Since all the other observers have since released their reports, where is the report of the CAN Observers Team?

NCEF noticed that a notable arm of the Church, the Catholic Church, did not join the delegation that went to congratulate President Buhari. This would be consistent with a communiqué issued by the Catholic Church expressing concern about the 2019 general elections and advising that dissatisfied individuals should seek recourse in the court of law. This, in the view of NCEF, is how a Christian body should respond to issues of this nature.

NCEF is making these points for record purposes so that, in years to come, if any further evil befalls Christianity in Nigeria, no one would claim ignorance of the issues that led to the emasculation of the Church. As Christian Elders, we affirm that it was ill-advised and ill-motivated for anyone claiming to represent the Body of Christ to rush to congratulate President Buhari pending the determination of the petition before the electoral tribunal.

Presently, Christians are mourning over 200 people murdered in Kajuru and Adara in Southern Kaduna. There are increasing reports of the Christian clergy being routinely kidnapped and murdered in Middle Belt and parts of the North. These are in addition to genocide in Benue, Taraba, Plateau, and other parts of Southern Kaduna. So far, no arrest has been made and no one has been prosecuted. Therefore, for any Christian leader to go and shake the hands of the man who has done nothing to stop the genocide is morally and spiritually reprehensible.

In addition to the concerns expressed above, it should be remembered that we all witnessed the debacles during the campaigns for the 2019 general elections as well as the violent conduct of the polls. We witnessed the widespread application of “inconclusive” elections where the opposition party had upper hand. We saw with regret the way Kano, Rivers, Akwa Ibom, Benue, Lagos, Taraba, Bayelsa, and Plateau states elections, amongst others, were handled. The campaign debate and presidential interview exposed the competence and capability of the candidates and Nigerians spoke through their votes and expressed their preference. Therefore, the will of the people must not be subverted. It is wrong for anyone, or any group of people, to seek to use CAN to legitimize illegality. That congratulatory visit, we insist, was not on behalf of Nigerian Christians.

President Muhammadu Buhari is Life Patron of MACBAN which sponsors the Fulani herdsmen militia. More than 70 victims of herdsmen killings were given Christian mass burial in Makurdi, the state capital on Jan. 11, 2018.

Fortunately for the NCEF, in making this clarification, no one can accuse the Christian Elders of religious bigotry or ethnic discrimination since both front runners are Muslims from the North and of the same ethnic stock. In the same vein, no one could say that NCEF is holding brief for any political party since NCEF neither supported any political party nor adopted any candidate during the elections. The interest of NCEF is that democracy should be permitted to flourish and prevail in Nigeria. As President Goodluck Jonathan demonstrated in 2015, the will of the people must not be subverted. We are no longer in the era of military coup in which individual(s) can impose themselves as rulers over the nation. This is a democracy and the will of the people must not be subverted.

NCEF aligns itself with the stand of the ethnic nationalities in Southwest, Southeast, Southsouth and Middle Belt Zones that the judiciary should perform its rightful oversight and ensure that the rightful winner of the 2019 Elections is sworn into office on May 29, 2019. If the judiciary, for whatever reason, is unable to take a stand and defend the will of the people, then Nigeria would have destroyed democracy and signed on as a fascist state.

Now is the time for every man of good conscience to rise and speak. It is no use waiting for illegality to be stamped upon the country before people would start complaining. The government should not be permitted to become illegitimate in Nigeria. This is the time to stand up and speak out. In this season, silence is not golden.