Ndiigbo Have Unalienable Right to Self-determination Within Nigeria or Outside of It – Declares Igbo Forum, Chicago

Below is the text of the communique released by the Forum of Igbo Communities in Chicago at an event organized at the First Immanuel Church, 1126 South Ashland, Chicago, Illinois on September 9, 2018, to receive a delegation of the Alaigbo Development Foundation (ADF) currently on tour of the USA.

In his address to the Forum, the President of ADF, Professor Uzodinma  Nwala, spoke on the issues of Igbo regional integration; homeland security; the on-going ethnic and religious cleansing in Nigeria; the militarization of Alaigbo and the brute torture of her women and youths; the infiltration and occupation of ancestral homes of Alaigbo by trained Fulani insurgents masquerading in various guises; the imperative of self-defense as fundamental natural right of Alaigbo and all humanity; the neglect of Alaigbo in the distribution of  immense foreign aid flowing into the coffers of Federal Republic of Nigeria; the seizure of the organs of organs of state authority and concentration of same in the hands of one ethnic group – the President’s kinsmen; urgent necessity of Youth Empowerment programs to alleviate the excruciating level of poverty in Alaigbo; the need to drive the Akuruo-Ulo (Invest-at-Home) Movement as a vital element in the rebirth and development of Alaigbo, etc.

The ADF President also spoke on the latest attempts to define the future of Alaigbo with particular reference to the Awka Declaration hosted by the Ohanaeze Ndiigbo which President Buhari has dismissed as personal agenda. He narrated the background to the Enugu Declaration of July 28, 2018 as a re-affirmation of Igbo position and which has been endorsed by over sixteen pan-Igbo and pro-Biafra organizations, including major stakeholders in Alaigbo.

On the fundamental position of the Enugu Declaration, the ADF President explained the need to synergize all the committed patriotic viewpoints in Alaigbo.

According to ADF President, there are two positions in Alaigbo today:

However, those Igbo citizens who wish to remain in Nigeria also believe in and demand their inalienable right of Ndiigbo to self- determination, insisting that any continued political union of Ndiigbo with their neighbors in Nigeria must be based on the fundamental principle of free choice, the choice to remain or opt out of the union; the recognition that Alaigbo is a nation, a land of free peoples and therefore, any union with any other nation must be based on the hallowed principle of Self-determination.

It is to be noted that Alaigbo did not become part of the Federal Republic of Nigeria initially out of choice, but by force, due to the determination of a foreign power that led to the Amalgamation of 1914. 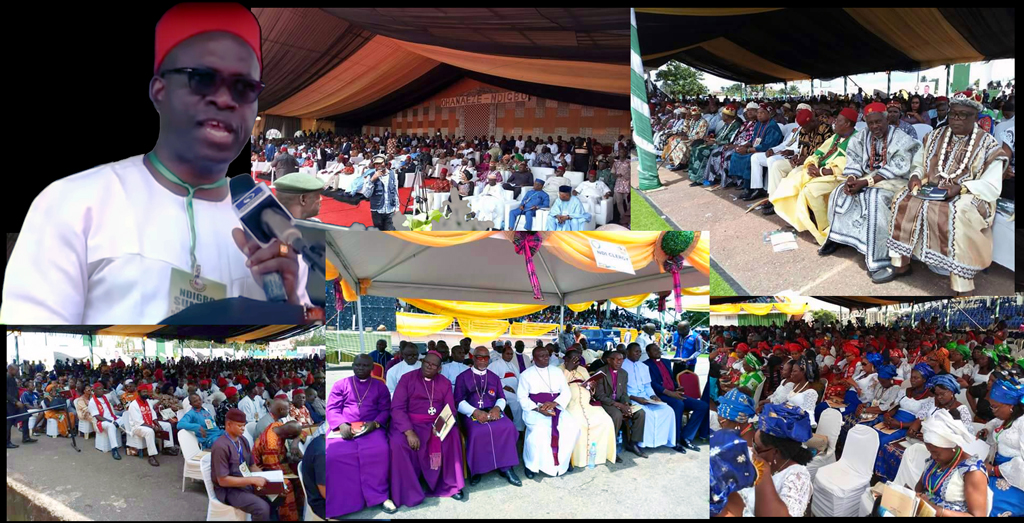 Scenes at the Ohanaeze-convened pan-Igbo summit held at the Ekwueme Square, Awka, Anambra state on May 21, 2018.

In light of the above, if Alaigbo is to remain as part of Nigeria, Alaigbo must be recognized as an autonomous self-governing region, in full control of our lives, our land, our resources and our security and legal system; free to relate to the world, but collectively agreeing on a union with our neighbors in Nigeria or with those willing to live under the same principle of Self-determination as we cherish and desire for ourselves.

However, if this fundamental national right of Ndiigbo is ultimately rejected by the forces of hegemony dominating the affairs of the Federal Republic of Nigeria, Ndiigbo shall opt out of Nigeria and establish the independent REPUBLIC OF ALAIGBO or whatever name we chose to name our independent Republic.

For Alaigbo, this is the option of self-determination and freedom guaranteed by our Creator and enshrined in the United Nation’s Charter of People Rights as well as African Charter on Human Rights.

This is the position which has been clearly articulated in the Enugu Declaration as a reaffirmation of the Igbo position on their future.  It has received the endorsement of the two shades of opinion in Alaigbo.

Finally, the ADF President distributed the text of the Enugu Declaration which was read and discussed at the Forum.

The ADF President briefed the participants on the programs and activities of ADF since its birth which has made it a major voice in the Igbo struggle and affairs.

The Forum engaged in spirited discussion on the speech by the ADF President, fielding fundamental questions, expressing the concerns of the Igbo Diaspora over the urgent need to ensure that the survival of Ndiigbo and development of Alaigbo are not neglected or compromised; the need for synergy of all patriotic citizens of Alaigbo, the special role of Igbo Diaspora in helping to pilot the struggle for the survival and development of Alaigbo, etc.

Long live all the communities of civilized nations, the world over!!

Chief Eddie Nwosu
Chairman, Committee of Conveners
– on behalf of the conveners.