Ndiigbo Are Under Heinous Hatred and Siege from the Arewa Core North – Says Prof. Boniface Egboka

Many reasonable per­sons ask and won­der why the hei­nous hatred for the Igbo? Do they hate Igbo because they are the way they are or for what? One judges from experi­ences in Nigeria, particularly from the core Arewa Northern­ers predominated by the Hausa/Fulani who seem to hate the Igbo so much beyond politics. The re­cent Arewa core-North youth quit notice/order to Ndiigbo to pack out of the North before October 1, 2017, followed by vicious and widely-spread hate song in Hausa are clear signals portending heinous hatred by core North against the Igbo, who are being intimidated and abused in order for them to run. 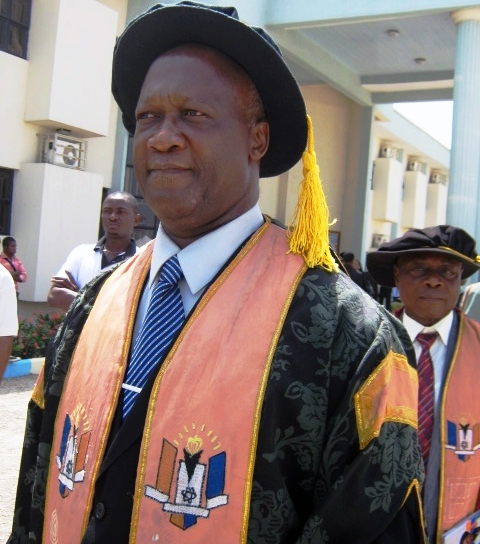 The scenario is like the gory events of the 1966/67 events in Nigeria that resulted in pogroms and genocide against the then East­erners which caused loss of mil­lions of lives, properties and the resultant Nigeria-Biafra Civil War that lasted for three years. It seems that some ill-advised peo­ple are desirous of repeating the unfortunate history of 50 years ago. There are no plausible rea­sons for such internecine hatred against the Igbo who are expected to live with the hate-filled ethnic groups in one country. What has been in vogue and that has con­tinued to degenerate over the years, up to these times, seems to be sheer misplaced hatred of the Igbo by the Hausa/Fulani who are appreciated by the Igbo. One pleads that honest Nigerians must not allow this mass hatred to continue.

Many Hausa-Fulani, without cogent reasons, inexorably hate and detest the Igbo. Eve­rything possible must be done by people of goodwill of Igbo and Arewa nationalities of Nigeria to stem this ugly, disgraceful and dangerous tide of mass ethnic ha­tred against the Igbo which has been increasing in geometric progres­sion since Amalgamation of 1914. This hateful attitude has resulted in unbearable fatal outcomes for Ndiigbo. This has marred positive objects of Nigerian his­tory over the years and threatens the unity of Nigeria. At each of such killings of the Igbo in the North, many innocent lives and property are usually lost. Nothing palliative, corrective, apologetic, ameliorative or compensatory was carried out to persuade the Igbo to forgive; they are left always to bear and deal with their own sufferings by themselves. At each of the killings and mayhem, the Igbo are abandoned and forced to bear their human and material losses, no matter how painful.

Many Hausa/Fulani see the Igbo with wrong eyes and souls. Their indigenes usually lead the fatal attacks and killings of the Ndiigbo in their midst. Unfortunate­ly, many Igbo have not thought out these ungodly developments properly, deeply and sensibly. There is an urgent need for strategies to contain this hate-instigated idiosyncrasy and to work out possible peaceful approach or resistance. Ndiigbo must appreciate their negative ratings by the Fulani and think seriously on what to do for survival vis-a-vis in dog-eat-dog relationships of the Hausa/Fulani with the Igbo, as a group, if they must live together with them in Nigeria.

While the Fulani have been very strategic, thorough and me­thodical in their plans, ways and manner of handling the Igbo, the Igbo tend to be fatalistic or re­active over existential dilemma with the Fulani. At each point in time, the Fulani would begin with hate speech on the Igbo and then proceed to intimidate, attack, kill and destroy their property. Ndiigbo would often react with protestations after the fact; then the case peters out and both parties wait in anticipation for future fatal en­counters. The latest Igbo-Hausa/Fulani hate-speech conflict is ominously advancing while no one, state or federal government or international agencies, are in position to prevent impending vicious attacks from the bloodthirsty madding crowd.

The Are­wa youths predominantly of core North, issued an order/ultimatum with hate-speeches to all Igbo liv­ing in the North to leave before October 1, 2017. They handed out threat orders to pack and leave Nigeria because, according to them, IPOB is demanding for an independent Biafra. They also accuse Mr. Nnamdi Kanu of making hate speeches in Radio Biafra. These Arewa youths concluded wrongly that every Igbo man living in the North and beyond is an IPOB member. Arewa North people fol­lowed this leave-Northern-Nigeria order with a widely cir­culating hate song in Hausa be­rating and setting up Ndiigbo, who are supposed fellow Nigerians of theirs, for possible slaughter. This is like the song in Rwanda that pitched the Hutus against Tutsis in blood-chilling genocide where millions of mi­nority Tutsis were massacred by majority Hutus.

The situation now in Nigeria is similar to what happened during the pogroms of 1966/67 before Nigerian-Biafra war where millions of Easterners were massacred by then North­erners. Similar ill-winds today hazard potential mass murders of the innocent if preventive measures are not taken now. The Arewa youth threats and hate-Igbo songs are not empty threats; the feared evil may come to pass. One has not seen enough deterrent actions being taken to stem the unholy tide of an evil mayhem occurring as forewarned. Judging from their ante­cedents, some daring overzeal­ous Arewa youths may carry out their murderous acts just to make good their threats.

Even though Igbo people take the threats seriously and may send their families home; some courageous ones may stay put and resist any putsch determined to hold their grounds to protect lives and property anywhere in the North. They will resist any attempts to kill or dispossess them of their property and life savings. One can call the Igbo man anything but not a cow­ard. The Easterners, who had resisted over 60% of the country before and survived for three years of war, are still alive till today. The Igbo can resist the estimated 20% of Northerners who hate them in Nigeria today and are always desirous of killing them at little or no provocation.

The Igbo does not hate any eth­nic group or section, including Hausa-Fulani, in Nigeria. The January 1966 coup, which was touted to have been led by Maj. Nzeogwu and resulted in the unfortunate deaths of few Northerners, Westerners and one Igbo Lt. Colonel, was carried out by some Nigerian army offic­ers and men of Yoruba, Hausa-Fulani, Igbo, Ijaw, Tiv, Birom and other ethnic nationalities. The coup, which was mischievously and wrong­ly labeled as an Igbo coup, was planned to hoist Chief Awolowo, a Yoruba, as the Prime Minister if it had succeeded. Where lies then the claim of Igbo parochial interest in the January 1966 coup? The said coup even was foiled by two Igbo men, Major-General Ironsi in Lagos and then Lt. Col. Ojuk­wu in Kano while the Igbo com­mander of the Armory lost his life while resisting to surrender key to the Armory in Lagos. 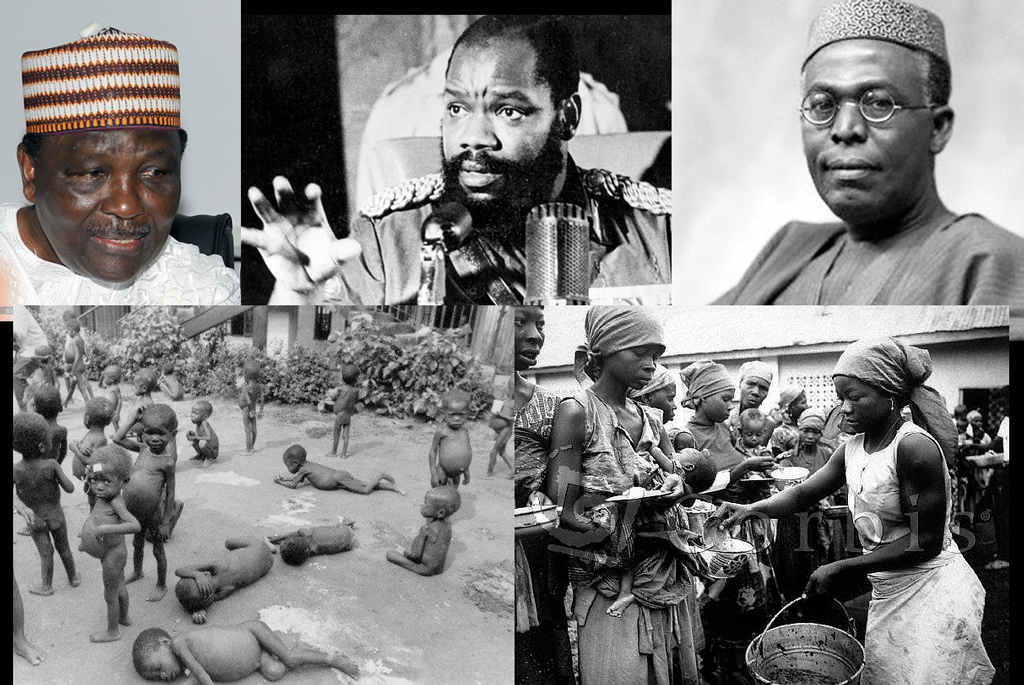 Gowon, Ojukwu & Awolowo were the principal actors in the Nigeria/Biafra Civil War in which more than 2 million children, women and aged lost their lives.

This coup caused the pogrom/mass deaths of innocent thousands of Eastern­ers in the North. Over 200 Igbo military officers were killed in a revenge coup organized in July 1966 by Northern army officers who initially demanded for Araba (Hausa word for Independence/Seces­sion) and planned for the North to secede from Nigeria. The Igbo do not hate Northerners. They have lived with them in commercial business and social interactions for many years; they inter-married and had done businesses together. There are Northerners who live peacefully in Igboland. When Igbo politicians are in con­flicts with some Northerners, it does not mean that every Igbo is involved. Many Igbo married and got children in the North. Dr. Azikiwe and Gen. Ojukwu were born in Zungeru; Chief Jim Nwobodo and Orji Uzor Kalu had Northern influence; Maj. Nzeogwu’s moth­er is said to be Tiv; Governor Okorocha grew up in the North and has his Okorocha Founda­tion operating in Northern cities.

The Igbo believes in sanctity of human life in his tradition, culture and religion. The Igbo does not hate, kill or massacre people. They will, however, chal­lenge or face one or any threat squarely. The Igbo is not a cow­ard; he can stand his grounds in self-defense. Igbo youths are protesting maltreatment, injustice and inequity against their people with no threats to life or property of any ethnic group or nationality. The Hausa/Fulani should stop their hatred for the Igbo. Both groups should credit each other with basic intelligence, freedom of worship, rights of free existence in the dreamed peaceful, just and equitable Nigeria.

I am not from the Northern Region. I am from the Mid­dle Belt.