Ndiigbo, We Are on Our Knees, Begging You to Forgive Us for Past Sins Against You – Middle Belt Nationalist

What Is the Middle Belt?

This was sent to me by my classmate, an Igala High Chief who is the Legal Adviser of their own sociocultural organization and version of Ohanaeze. The full Communique will be issued soon. It is worth reading.

On various platforms, people have been asking us – What is the Middle Belt? What are its geographical boundaries and who and who make up this community? Let me set the records straight today.

As a territory, the Middle Belt is everything outside the core Sharia North, from Southern Borno to Southern Adamawa, Southern Kebbi, Southern Gombe, Southern Bauchi, Southern Kaduna, and Southern Niger, to Plateau, Nasarawa, FCT, Kogi, Benue, Taraba, and Kwara. We make up a motley of clans that are ethnographically of Niger-Congo, Bantu, Chadic and Nilo-Ethiopic extraction.

We are the descendants of the great Nok Civilization that descended from ancient Egypt and the Nilotic cultures of Meroe and Kush. We invented iron smelting before the ancient Greeks and Romans. We are the descendants of the acephalus and Republican Tiv people, various kingdoms such as the Apa, Goemai, Igala and the warrior Kwararafa peoples who conquered Kano for the better part of two centuries. We were never conquered by the Fulani Jihad. Our forefathers defeated them at the famed Battle of Ushongo 1817 in the Benue Valley. Our civilization is no less illustrious than the greatest on the continent of Africa.  We are a rather quiet and shy people, unlike all these empty gongs and noisome pestilences all over Nigeria. But the fact that we are a humble people does not mean we can be taken for fools. You underestimate us to your mortal peril.

Our ancestors were a proud and warlike race. Warriors do not make noise. Only women do (apologies for being politically incorrect). Anybody that was never conquered by Fulani Jihad and/or does not subscribe to the hegemony of the Caliphate, is a part of the Middle Belt. We have done our ethnographic and geographical surveys. The Middle Belt is easily the most populous and the largest region by landmass in Nigeria, with an estimated 40 million people and 300,000 sq. Km. We have a lush green Savannah, with the most variegated climate of any region. Jos and Mambilla Plateaus are virtually Europe in Africa, with their near-temperate climate and flora and fauna.

We can grow nearly all temperate fruits and vegetables in our region. The district of Bokkos in Plateau State alone can feed the whole of West Africa with potatoes. We can also do world-class ranching and all forms of animal husbandry in the Middle Belt. We have the richest farmlands, and we are easily the breadbasket of Nigeria. We feed virtually the whole country. Benue State alone can rival Israel and California in exporting citrus to world markets. The Benue Valley is extraordinarily blessed. That is why the Fulani covet it and the entire Middle Belt so murderously. The largest rivers crisscross our territory, meeting at the mystical city of Lokoja and flowing through Asaba and Onitsha — through Biafra land – into the sea. No desert, no Sahel. Our people are predominantly Christian, with some Muslim converts and Traditional worshippers.

If you are to fight us on level ground, you will know what our people are made of. The Fulani are cowardly. They come by stealth of night, under cover of the armed forces and a federal government we elected, slaughtering unarmed and defenseless women, children and peasants. The brand of Islam that some of our people converted to is the tolerant and humane type, as found in Yoruba land. Our land is full of solid minerals.  Before the discovery of the oil people are boasting about today, for almost a century, tin mining on the Jos Plateau sustained the British colonial economy.  There was electricity in Bukuru, Jos, long before the city of London had it, thanks to the ingenuity of the Amalgamated Tin Mining conglomerate.

Today, we put the whole world on notice: The Middle Belt has woken up. When our latter-day Janjaweed are ready to fight their next civil war which they have planned meticulously over the years, let it be known that we have ordered our people throughout the length and breadth of the Middle Belt, on strict instruction, never to be a part of it, as we stupidly did in 1967-70. We foolishly served as the foot soldiers of the Caliphate, to our bitter shame and regret! We lost almost a million of our people fighting our brethren – Ndiigbo; fighting for a Fulani Caliphate that, unbeknownst to us, considered us to be their sworn enemies and contemptible chattel slaves all along. 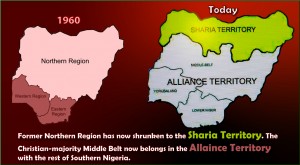 On the left is the North-South divide at Independence of 1960. On the right is evolving Sharia-secular geopolitical divide reflecting the choice of the Middle Belt indigenous peoples.

Ndiigbo, we are on our knees, begging you to forgive us for the sins we have committed against you against God and against Humanity. Please, forgive us our monumental follies of yesteryears. You are our Umunna across the Great River. We swear by the graves of our venerable warrior ancestors, the graves of the millions of your and our people who perished in Biafra land, and we swear by everything we hold most sacred, that we shall never stand against you in life or in death. Never again!

To you, the Fulani genocidaires out there, you are on your own on that next civil war that you are planning against the glorious people that are said to be the Jews of Africa. We shall never be a part of it. Instead, they will be our allies in war and in peace. And we shall see how you will ever gain a free passage again through our territory to go and commit genocide in the South this time around!

The Pharisees in Judea threw a tantrum when Jesus the Christ the Holy One of Israel, healed the blind beggar on a Sabbath day. The blind man could not care a hoot. All he said was, ” I once was blind, but now I see!” Let the whole world know it today: We were blind once, but now, we can see. We shall never again be used as cannon fodder to fight our brethren in the South. We shall serve no other gods other than Jehovah El-Elyon, Jehovah Tsidkenu, Jehovah Rapha, Jehovah Jireh, Jehovah Shammah, Jehovah Elohim. Jesus Christ of Nazareth is the King of the Middle Belt. O Shepherd of Israel, I die for love! The God of Abraham, Isaac and Jacob shall be our God forever! We commit the sacred lands of our ancestors to His divine protection. This is our solemn Covenant. It is Him alone that we will serve, even unto the ending of the worlds.