Never Again Shall Nigeria Be Ruled by Dictator, Allow Naira to Depreciate to Worthless Paper

Since the colonial era, popular music has been used to address routine life experiences of urban lifestyle such as love, financial hardship, trust, betrayal etc. Contemporary musical creations tend to emphasize rhythm and enticing dance moves with less spotlight on the lyrics. Musical videos are made with the action-driven youths in mind. Dance music currently dominates Nigeria’s popular culture. Musical artistes who possess good looks and attractive dance style usually gain popular following because of their talents and physical attraction. But this video brings something new to Nigerians. The video has musical composition with a message of a different genre for its target audience.

Unfortunately, the ascendancy of Muhammadu Buhari to the Nigerian presidency coincides with the point of inflection in the country’s political economic downturn. The brand of democracy created since 1999 had betrayed the hopes of Nigerians so much that the overwhelming majority of the populace are simply disgusted and as one would expect, demand for change shall keep on building a large following within the electorate. After repeated failures to rein in the excesses and nonperformance of the former ruling party, the Peoples democratic Party (PDP), the opposition partisan formations came together, under aegis of the All Progressives Congress (APC), to strategize on the most effective way to take over power at the center of governance in Abuja. Voila! Promise to change both the cooks and the menu sounded like music to ears of the Nigerian electorate who were easily persuaded to buy into the change message of the APC in run-up to the 2015 national electoral cycle. Simplistic diagnoses were made in explaining Nigeria’s failure to thrive despite the country’s enormous natural and manpower endowments.

Unrestrained corrupt practices in ranks of the former ruling party were blamed for crippling Nigeria. The APC’s answer was to promise a single-minded national endeavor to eliminate corruption from the fabric of Nigerian society. The neophyte party marketed itself as incorruptible with President Buhari at the lead. The APC even adopted the mascot of broom to underscore the party’s commitment to cleanse the country’s crippled political system. So, the APC got the accent of the electorate and emerged in 2015 to control both the presidency and the National Assembly. 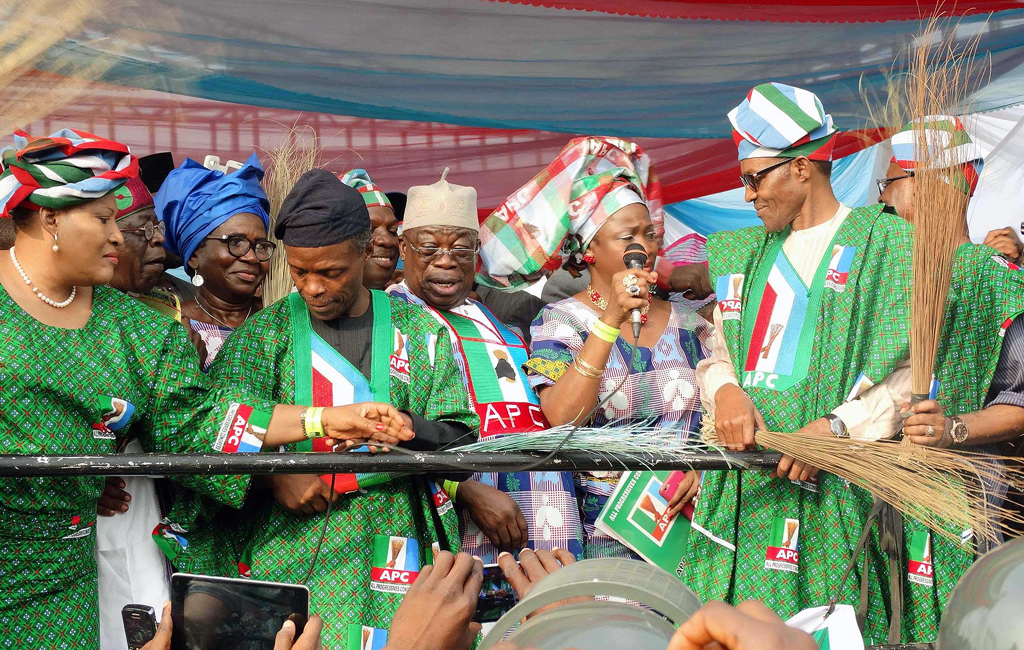 Maybe Nigerians believed their politicians too much with little or no circumspection. Since the diagnoses for the country’s crippling ailment proffered by the APC were wrong, whatever designs that were put to real-life test all failed to provide the desired results. To compound matters, the global glut in crude oil supply caused protracted decline in prices of Nigeria’s main foreign currency earner. Coupled with what many have now come to characterize as daftness of this administration’s  economic management team, the naira dropped precipitously to half of its value within the first year of Buhari presidency. Further complicating matters, Buhari presidential agenda was perceived to be predicated on Northernization and Islamization of Nigeria, especially among the Christian intellectual, business and political elite whose expertise drives the national economy. There is virtual unanimity that the Buhari administration and the APC-controlled National Assembly have been abyssmal failures.

This video could not have been released at a more inauspicious time for the Buhari’s faltering presidency and the ruling party, APC. This is no campaign season but the criticism on the APC and its principal, President Buhari, is scathing as it is damning. A caricature has been made of the theme of CHANGE which an overwhelming percentage of the population feel as a descent into widespread economic hardship, political uncertainty and heightened insecurity of lives and properties.

The lyricist choruses “Never again” shall Nigeria be ruled by the APC, a dictator without a certificate and someone who would simply allow the Nigerian consumers’ purchasing power to depreciate so much and so fast. He even went further to wade into the 2019 electoral cycle which is still nearly 2 years away from now. “APC must never rule us again”, wrote the songwriter who urged the electorate to ensure that other rival parties can win during the 2019 general elections.

Vast territories in mid section of Nigeria is called the Middle-Belt Region. The Muslim Far North had dominated this territory since the colonial era.

Should it be concluded that the PDP might be responsible for enabling the production and release of this video? It is hard to say. What may be happening here is the preview of a public repudiation of the APC by the electorate in same fashion that its alternate, the PDP, was resoundingly humiliated out of office in 2015. There could not have been a clearer way to announce the final collapse of Nigerian democracy of the past 18 years. The only future left for Nigeria is either to devolve through fundamental restructuring or to break up to its constituent ethnic nationalities.

Lesson of this video is that the status quo for Nigeria has definitely reached the end of the road.