Nigeria Chooses & Eats What Nauseates It – Calmly Without Throwing Up. But, for How Long?

The Bewildering INEC-scheduled 2019 General Elections: Should It Be Neither Buhari nor Atiku?

“Sometimes, there are no good options”, said The Economist, a respected, authoritative international magazine, in February 2015. That was how it started its analysis of that year’s presidential election in Nigeria. It looked at the choice between Goodluck Jonathan and Muhammadu Buhari and said the contest was between “a failed president” and a former dictator “with blood on his hands.” Warts and all, The Economist saw Buhari’s candidature as “the least awful” of the choices available that time while it concluded rather ominously that “with a heavy heart” it was voting Buhari. Fifteen million Nigerians did too — they voted Buhari. The magazine came again last week Thursday with an oxymoron for Nigeria. It called the 2019 contest an “ugly beauty contest.” It looked at the options before us as we jog towards the 2019 elections, and once again shook its head for the country. Nothing has changed — except that things have deteriorated beyond the awfulness of 2015. Nigeria is itself a corporate oxymoron — a paragon of paradoxes. It chooses and eats what nauseates it — and does so calmly without throwing up.

Atiku Abubakar and Muhammadu Buhari are the options the elite put in our 2019 plate to choose and chew. “Both candidates are boringly familiar to voters. Mr. Abubakar has been in every election since 1999; Mr. Buhari in every one since 2003. Oddly for a country where half the population is younger than 18, both candidates are in their 70s. Both face the challenge of energizing an electorate that is growing disenchanted by extravagant promises that bring little change.”

That was the voice of The Economist. A contest between two challenged candidates is what Nigeria has next year. Some people wish this contest could suffer the fate of the 2017 Mr. Model Tabasco pageant — an annual male beauty contest held in Tabasco, Mexico — which was canceled when pageant organizers deemed all contestants were not “beautiful” enough to hold the title. But some contests are attractive simply because they must hold. Nigerians must make a choice next year — the election will hold, and a winner will emerge between these two, however ugly. That is why we must wake up and put on our caps of reason.

The Economist was right. Buhari and Atiku are stale dishes in our plate of hope. But in the hierarchy of rancidness, some fruits taste better than others. A friend was told by an old warhorse in the Middle Belt — after Atiku’s PDP win last week — that in the coming elections, he would choose life (even if corrupted) over death at the hands of unrestrained herdsmen. And that fact, really, is the tragedy of the Buhari leadership (or lack of leadership). Every voice that asked this president to be decisive on the Middle Belt security quagmire was called names. Now, the tragedy of that zone plus the litany of unfulfilled ‘extravagant promises’ will forever define the Buhari years. I do not know how he intends to rule beyond next year because when Nigeria is determined to sack a leader, it does not stop until he is gone. Ask Shagari; ask Buhari; ask Babangida; ask Shonekan; ask Abacha; ask Obasanjo; ask Jonathan.

I met some Ugandan ladies at a UNESCO conference in Paris, France, in 2008 and asked them about their perennial president, Yoweri Museveni. They did not find my choice of adjective funny, but they had envious words for Nigerians for always finding a way to sack their own Idi Amins. Nigeria always moves on, and it appears it will move on next year. A husband that is not a husband is not worth a woman’s stay.

This election approximates the spirit of a 1982 American drama, ‘Sophie’s Choice.’ Sophie was forced by the Nazis to choose which of her two kids should be killed (gassed) by them. She made her painful choice: one child lived; the other she sent to her death. American theologian and author, Tryon Edwards, advised us to choose neither between two evils. But this is not possible in a democracy of APC and PDP. If we listen to Edwards, we will be voting for other candidates who themselves know they won’t win. Candidates of weak parties waste time and votes and help to get unintended electoral results. We are stuck with either Buhari or Atiku. An irony of our multiparty democracy is that every vote against both ‘awful’ candidates is a vote for “the greater of the two evils” to win, sit tight in power and wreak greater havoc. Late American actress, Mae West, confronted with such two unpleasant options, said she would always go for the one she had “never tried before.”

The two options we have, we have tried before. We have tried Buhari as a pilot; we have tried Atiku as an assistant pilot to Buhari’s boss. The verdict has been awful — but didn’t The Economist goad us to choose “the least awful” in 2015? If it was right then, should it not be appropriate now that the choice of 2015 has proven really, really awful? And is being driver same as being a conductor? We have to answer those questions and decide. But we won’t forget that the pilot we chose “with a heavy heart” in 2015 has flown millions into clouds of job loss, grinding poverty and into the turbulence of bloody, deadly divisions. But then, he was chosen “with a heavy heart”! When you marry a woman “with a heavy heart,” you can be sure that she will beget offspring that will give a lifetime “of heavy hearts.”

The Spartans had the same logic. Their king, Archidamus, married a very little woman – petite by today’s standard of description — and they felt horrified. A little woman as their queen, the Spartans said, would degenerate their royal breed by producing mere “kinglets.” And kinglets are no kings in carriage, conduct and comportment. Fortunately, what we have here is no Spartan monarchy that lasts a lifetime. We are in a democracy (so-called) where mandates are renewed every four years. The next president must be new and better than what we have.

We are like Esi in Ama Ata Aidoo’s “Change: A Story of Love.” We leave a husband who won’t dream our dreams. We marry another (a married man) who promises to be there for us rain and sunshine. He comes into our lives with a bang and then soon evaporates into conjugal failure. His ability moves progressively from 4G to 3G to EDGE — and still, he says he is strong and reliable. We think of moving and not moving away from this life of serial failure and disappointment; we dither and wither as no-nonsense grandma looks us in the eyes and shouts: “Leave one man, marry another. What is the difference?” Really what is the difference? All men are like all politicians – same of same. But it is worth the while to move away from unrepentant failure or get it out of our lives.

Why should a sterile man insist on holding on to a woman who desires children? Nigeria deserves life. A failed government is a desert. Deserts turn lifeless whatever they touch. The solution to a failed system, no matter how vociferous and self-consciously pompous, is to wipe it off the board — like the last lesson. And it has really been a lesson these past three and a half years. And you don’t have to wait till a snake bites before it is killed. The problem with us is that we give the devil a lot of room to breathe before we wake up to confront the serpent. When a millipede behaves like a snake, you kill it before it turns to a snake. Indeed, whatever looks like a snake in the dark should be treated like a snake. A bad government anywhere is a snake. It kills. You don’t prolong its life with excuses; its illness is terminal, it cannot be cured with propitious accommodation. It is a spirit of badness that should be exorcized before the land can have hope. We did with Goodluck Jonathan and heaven did not fall, we can do it again — unless we are satisfied with the current reign of pretentious abuse. 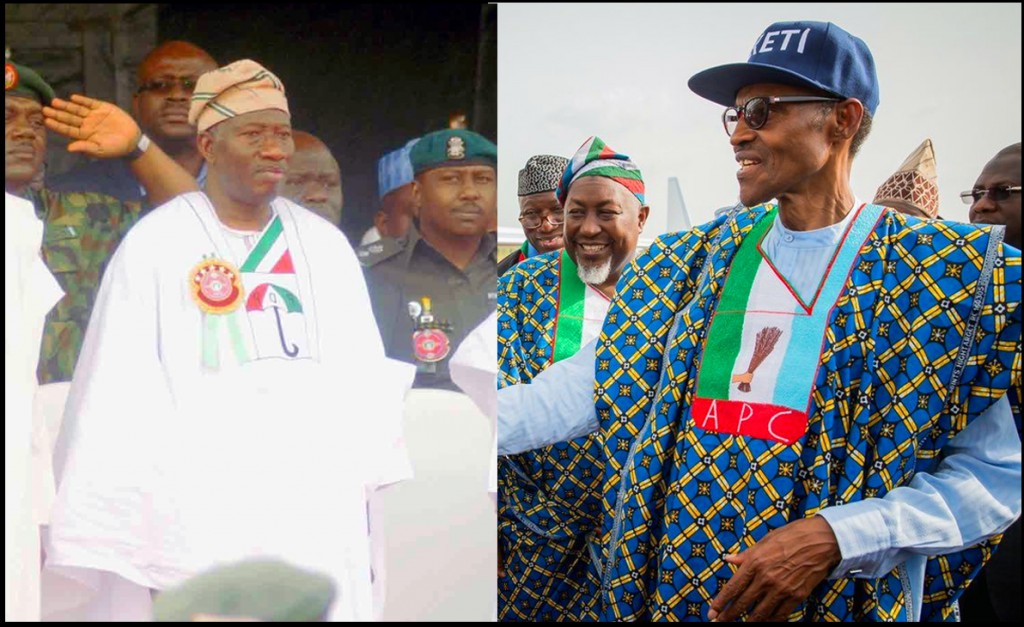 During the 2015 presidential election campaign, the APC manufactured and dumped tons of lies on the Jonathan’s PDP administration while making promises to correct all the errors and eliminate corruption if Buari was elected president.

American country music icon, Willie Nelson, some days ago, released a political anthem, a rallying cry against bumbling politicians who won’t leave us alone. Nelson asks us to get all of us to rescue ourselves from clowns who (mis) rule us: He sings, unknowingly, for us — Nigerians — and for all who suffer what we suffer: “If you don’t like who’s in there, vote ‘em out / That’s what Election Day is all about / And the biggest gun we’ve got is called the ballot box…”

Should we really have any problem sacking a government after four years of “extravagant promises that bring little change”? And is a term of four years really not enough to do great things? How long does it take for a real man to give his wife belle? No regime should, really, henceforth, have more than a term until we strike gold in our search for quality leadership. The Buhari government’s behavior keeps reminding us of the locust years of the PDP and why we should not go back there. Nobody likes what ruins and that is why the experience of the past must continue to guide the present. Would we have ever known of the Dasuki billions if we had not voted out the Jonathan government? Will it not, therefore, serve us better if we apply the same sense and vote out PDP’s successor for a timely, quick assessment of how truly honest APC has been doing in the management of our affairs? We need to find out and we can’t while it sits on the common chest. But the choice is almost like what we had in 2015.

I am echoing the Middle Belter who insists he would vote for the sanctity of human life and would reject mouthed integrity that anoints a super race in a federation of equals. But I add that the new man, no matter how he behaves, should not have a second term. Every four years, we eject them like arrogant defaulting tenants, lest they change the title documents in their favor. When we ‘change the change’ repeatedly, one day, we will get it right and have a country of undegradable values. “Election Day is coming ‘round again” in February 2019. As it comes, we sing the ‘Vote them out’ anthem along with Willie Nelson. It is a sacred duty to vote out the “bunch of clowns” – in Abuja – and in all constituencies that suffer bad representation. When we change them repeatedly and serially, politicians will appreciate the impermanence of power. They will learn to do good and give justice to all races of people without fear, favor or ill will. They will not bar cow thieves from traveling and fete cow robbers in the Villa. They will put the long-suffering nation on an even keel.

“And when they’ve gone, we’ll sing and dance and shout

And if you don’t like who’s in there, vote ‘em out

And if it’s a bunch of clowns you voted in, Election Day is coming ‘round again

And if you don’t like now, you can change it anyhow

And if you don’t like who’s in there, vote ‘em out!