In 1980, a foreigner visiting Nigeria could only get N50, 500 in exchange for US$100,000. Forty years later, one would almost require the service of a bullion van to convey the naira equivalent of the same quantity of dollars. Naira, the currency of the biggest economy in Africa, has lost approximately a whopping 84,000 percent of its value against the dollar in the past four decades.

Today, the United States dollar is worth close to 500 times the value of the naira, which has continued to tumble. The Central Bank of Nigeria (CBN) has frittered billions of dollars from the external reserves in recent years to keep the local currency firmer, an effort the late Henry Boyo, a famous economist, had described as “self-affliction”. Yet, the naira seems to have mastered its self-destructive art, tumbling against all major currencies at will.

In terms of market size, population and productive capacity, Nigeria sits atop Africa’s pecking order, which is the reason it is often taken as the gateway to the continent’s economy. With a gross domestic product (GDP) of $450 billion in 2019, it has clearly defined its position as the biggest economy in Africa, pushing its rival South Africa to a distant second place. Yet, while the naira exchange rate to the dollar is N470 or N360 to a dollar, depending on the version of the rate you use, the rand-dollar exchange rate is less than 20.

Notwithstanding the un-computed massive underground economy, the country controls nearly one-fifth of Africa’s economy. Sadly, its currency is the weeping child of the continent’s economy. It is not only the second weakest among the currencies of the top eight economies of the continent – Nigeria, South Africa, Egypt, Algeria, Morocco, Kenya, Angola and Ethiopia – but also distantly inferior in a pairwise comparison.

Apart from Angola’s kwanza, currencies of the leading economies – South Africa’s rand, Egypt’s pound, Algeria’s dinar, Morocco’s dirham, Kenya’s shilling and Ethiopia’s birr – are much stronger than the naira. Apart from strength, the naira is among the most volatile among ‘Africa’s G8′ (a club of countries that control nearly 70 percent of the continent’s production capacity). In the parallel market, the naira lost about 25 percent of its value year-to-date, whereas most of its peers’ losses (although official) are below 20 percent.

The strength of a currency is symbolic of its country’s relevance and strength. Riding on the confidence in its currency, China is lobbying the rest of Asia to expand the acceptance of Yuan in a bid to bolster its economic clout and reduce the United States’ overbearing posturing. Decades after the emergence of the euro, the pound sterling has maintained its sound testimony of the United Kingdom’s undisputed economic superiority in the region. The historical ‘cold war’ over the pound and euro also bears testimony to the importance the British ruling class attaches to the currency.

And the dollar’s global acceptance, as well, is telling of the United States’ ascendancy. Today, the dollar is America’s iconic emblem in strength and significance. Even China, who was previously embroiled in politics of deliberate currency devaluation to retain and expand its global market share, seems to have realized the strategic importance of a stronger Yuan.

Perhaps, Nigeria is the only regional leader with the sort of crisis its currency has faced in the past decades. Even the currencies of Botswana, Cape Verde, Eritrea, Gambia, Ghana, Lesotho, Liberia, Libya, Madagascar, Malawi, Mozambique, Namibia, Sudan, Swaziland, Tunisia, Verde and Zambia, whose economies par into insignificance when weighed against Nigeria’s, command more respect than the naira.

Successive CBN governors have lamented that the major problem of the naira is Nigerians. They have blamed its worthlessness on the insatiable desire for imported goods and services. The complaint almost became a song of a sort to Mallam Sanusi Lamido Sanusi when he was governor. The current helmsman, Godwin Emefiele, has made the campaign a pastime.

Emefiele has recently advocated some form of protectionism as a necessary option to stabilizing the naira and rev up economic growth. He has insisted, for instance, that the border closure is good for Nigeria, advising that the neighboring countries, especially the Republic of Benin, should be made to sign certain conditions before reopening.

At the 2019 Banker’s Dinner, Emefiele charged bank chiefs (whose lack of interest in any proposal that is unrelated to importation and oil/gas has contributed to stifling the real sector) to “encourage Nigerians to consume goods that can be produced in Nigeria, knowing well that a time will come when we may not have the foreign exchange to aid such activities if we continue to rely on earnings from the export of crude oil.”

This has been the rhetoric among public figures. From members of the Federal Executive Council to principal leaders of the parliaments, the warning is that the naira could only be as strong as the confidence Nigerians repose in indigenous products and services. But like other matters that concern national development, the bulk of the work is in actions than speeches.

Large numbers of containers enter Nigeria’s ports laden with imported goods and leave mostly empty due to the dearth of export goods.

Indeed, ‘everything foreign’ is a thriving culture. But what subsist over the years are public officials mounting rostrums in Gucci and Rolex to tell Nigerians how their actions and inactions are killing the naira. For one, made-in-Nigeria was one of the mantras of the eighth session of the National Assembly. Yet, there is no record that its members opted for an Innoson brand as against Toyota, which has become the country’s national car.

The Innoson case has exposed the hypocrisy of the made-in-Nigeria campaign. Over 99 percent of government functionaries and chief executives who visit his plant in Nnewi, the industrial hub of Anambra State, to see the uncommon exploit and pat the industrialist on the back drive there in Mercedes, Toyota and Volkswagen brands. Not even his kith and kin, who control a large portion of the country’s industrial activities, are exempted.

The ordinary people, who suffer the brunt of unbridled consumption of foreign goods, are as guilty as the leaders. In the 1960s, agriculture generated about 70 percent of the country’s foreign earnings. Its share of the country’s GDP was about the same proportion of foreign earnings. Decades after there is no local agricultural produce without foreign rivals in the market, even in open markets. That Beninoise and Togolese coconuts, oranges and pineapples have taken over the Lagos market is not news to any resident. Nigeria is the largest producer of cassava, yet there is TRS garri said to have been brought into the country from Ghana.

Last year alone, the country expended $1.3 billion in foreign exchange on the importation of cereals. The figure does not capture the undeclared and smuggled tonnes that come into the country through the land borders weekly.

In Asia-dominated neighborhoods like Ilupeju-Lagos, most fruits and vegetables stocked by shops are imported. Housewives would instead buy foreign food ingredients in many uptown estates to avoid being labeled primitive. This trend is the worst in the fashion world. Those who cannot afford ‘accepted’ brands likes Armani, Fendi, Hermes, Prada, Ralph Lauren and Versace either visit second-hand shops or opt for counterfeits from China. Of course, a few celebrities have made a name promoting locally-made fashion items. But really, the majority are merely ‘doing it for the gram’ to be politically correct.

Interestingly, the made-in-Nigeria item is neither here nor there. What qualifies for this label is loose in the manner it is applied today. Examine a belt made by a Lagos fashion maker, for instance. Is it the buckle that is sourced from Nigeria or the leather? Nigerians would rather eat their leathers as pomo and travel thousands of miles to China to get leather to service the local shoemakers. Switch to a piece of a jacket. Which among the components – the fabric, thread or the buttons – is produced in Nigeria? Interrogate almost all the sectors of the economy in like manner.

In manufacturing, the local input stops at labor with the bulk of the raw materials imported. Backward integration campaigns of many manufacturing giants are mere camouflages aimed at securing the government’s endorsements and fiscal incentives. They really do not add much value to the value chains they should have developed. The perennial gridlock around Apapa and the recent border closure have exposed the level of reliance of the manufacturing sector on imported raw materials. The border closure impact is so much that the Director-General of the Lagos Chamber of Commerce and Industry, Muda Yusuf, raised an alarm that the country was losing in terms of rising unemployment and inflation rate.

Even in industries where there are official policies on local content development, indigenous companies are not any better than cronies used by foreigners to get around unwary regulators. After contracts, chunks of the proceeds are repatriated overseas to the real companies behind the technologies and expertise deployed. And they are sent in dollars, which add to the historical pressure on the naira.

According to Jide Akintunde, Managing Director of Financial Nigeria, it is bad that the naira is among the weakest currencies in Africa but worse that it carries the challenge along with unbearable interest and debilitating inflation rate.

“Whereas any one of the three data may not indict macroeconomic management in Nigeria”, Akintunde observed, “the combination of high-interest rate, high exchange rate and high inflation, relative to the other top 10 economies in Africa indicates conclusively that the Nigerian economy has been historically mismanaged. 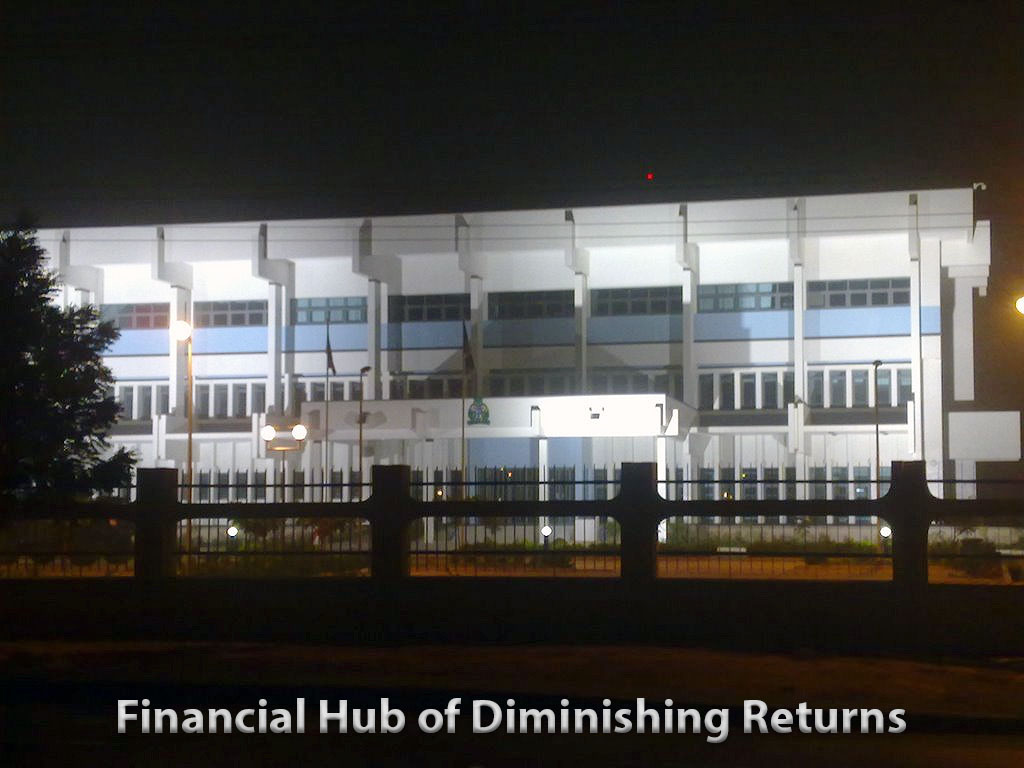 Central Bank with emptying vaults is plagued by diminishing revenue earnings from Nigeria’s lone export, crude petroleum. The institution serves as a piggybank for whoever occupies the pinnacle of power in Abuja.

“This is a big constraint to private sector development in Nigeria, given the high cost of credit. Additionally, the data explains the poor living standard of the average Nigerian, given that high-interest rate and low naira value mean prices of many products would be very high because of the high cost of foreign inputs or imported finished products.”

According to him, to address Nigeria’s macroeconomic woes, the political factors that drive economic inefficiency – large government, bloated and unskilled civil service, corruption and poor project decision – must necessarily be drastically reduced. Akintunde is not the first, second or third analyst to recommend a drastic reduction to the historical fiscal inefficiencies as a way to raising the performance bar. Public officials themselves have also identified this as one of the very actions that must be taken. But the ‘when’ and ‘how’ remain the unanswered questions.

The naira has benefitted from the entrenched inefficient macroeconomic management that has become the Nigerian style and unfortunately, accepted as a norm. Connected to the mismanagement, according to Godwin Owoh, a professor of economics, are politicization of the monetary authority, absence of inflation targeting, compromised financial reporting and poorly-conceptualized monetary frameworks.

Owoh, who described the naira as the worst-managed currency in Africa, regretted that the Central Bank seems to have become “too powerful to be probed” and called to order.

Perhaps, when the country gets to a stage when most Nigerians no longer lose sleep over overseas tuition fees, as observed by Prof. Kingsley Moghalu in a recent interview with The Guardian, they will realize that a weaker local currency is better than stronger one. But till the country expands its economic base, grows its industrial sector and reduces its heavy reliance on importation, a naira that tumbles daily is a headache Nigerians are too hard-pressed to bear now.