Nigerian Army Is not Neutral: It Colludes with Armed Bandits in Ethnic Cleansing – Danjuma

The post-colonial Federation of Nigeria had a terrible accident January 15, 1966 and since then, become mortally wounded.

By July 29, 1966, whilst still being stabilized in the Emergency Room, the Nigeria First Republic’s federating regions were, once again, viciously attacked by those who insisted on aggravating the accident of January 1966. As one would expect, Nigeria went into deep coma.

The attempt to resuscitate Nigeria at Aburi in January 4-5, 1967 was botched within Nigeria only a few days after the comatose nation woke up momentarily from coma in Aburi. On May 27, 1967, Nigeria died when the Gowon-led ruling junta broke up the pre-existing four semi-autonmous regions of post-Independence Nigeria into 12 so-called states without consulting anyone beforehand.

On May 30, 1967 the soul of Eastern Nigeria departed to a distant land known as Biafra.

Two months later, July 6, 1967, those who murdered Nigeria went to that distant land of safety and began the brutal attempt to drag back the soul of Eastern Nigeria at a place called Gakem.

The soul of Eastern Nigeria vehemently refused to be dragged back into the body of Nigeria.

The enforcers of unitary Nigeria, aided massively by the United Kingom government of Great Britain and its newfound friends of expediency, simply stayed put in Biafraland as an occupation force, pretending that they had restored the moribund Federation of Nigeria.

When the dust settled 30 months after on January 15, 1970, the violence that began in Gakem on July 6, 1967 had littered the land of safety for victims of genocide with the dead bodies of 3.5 million of the indigenes of Eastern Nigeria, 2 million of which were children deliberately starved to death by the depraved murderers of the Nigerian Federation.

The terminal stages of the disease of extreme hunger inflicted on those children was called kwashiorkor which manifested in heavily swollen stomachs, dry skulls with sunken eyes and shriveled skinny legs that could barely carry the body. At times, the totally unclad children become too weak to stand and simply fell to the ground and lay still until hovering vultures, taking them for dead, descended to tear them up for the festival of human meat orchestrated by the enforcers of centralized unitary Nigeria that we we behold today.

The Red Cross did its very best in an unprecedented and yet-to-be-paralleled magnitude of operations frantically tried to get food and medicine to the dying children of Biafra. But the forces of unitary Nigeria, under the watch of one Yakubu Gowon, targeted and bombed Red Cross planes on desperate humanitarian mission, killing the foreign pilots and crew.

May 30th, 1969, in faraway New York, a 20-year-old college boy, named Bruce Mayrock, set himself ablaze in the East Lawn of the United Nations Headquarters to protest the complicity and indifference of the global community to the genocide in Biafra, especially the deliberate mass starvation of little children to death. The security staff at the UN Hqtrs chased the burning Bruce Mayrock around the field until he slumped at the base of the statue at the center of the garden. He died in the hospital same day from severe burn injuries. It was this dramatic action, which Mr. Mayrock strategically orchestrated right within full view of horrified  international diplomats, that forced the hands of the global community to bring an end to the ethnic-cleansing genocide in Biafra. 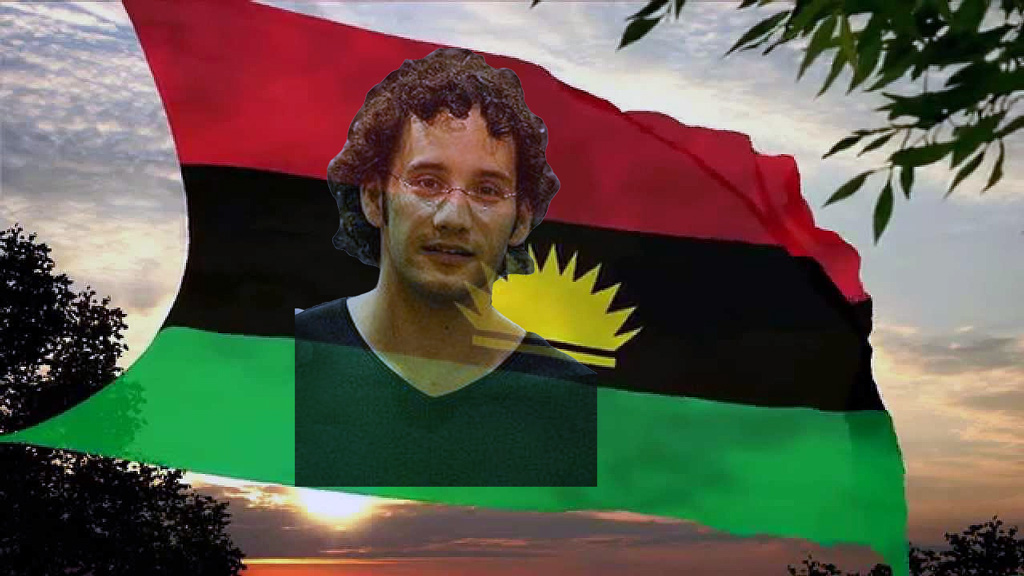 Bruce Mayrock gave his young life so that indiscriminate genocide in Biafra would be stopped by the UN.

I attended the 2017 Anniversary Memorial event of Bruce Mayrock’s supreme sacrifice for the dying children of Biafra. My generation, (as a matter of fact I was two years and a few months old during that war), was trapped with millions of others inside the totally blockaded Biafra when Bruce Mayrock gave his life to save the yet-to-be-killed Biafran children of the era.

Even amidst the Vietnam misadventure, the 1968 US presidential election that brought in Republican President Richard Nixon to replace of the Democratic incumbent, President Lyndon B Johnson, was basically shaped and decided by one major foreign-policy issue: the BIAFRA GENOCIDE.

Still in the US – so grievous was the misery of Nigeria’s cruel genocide in Biafra that another young American lad named Steve Jobs completely lost faith in the existence of God and became an atheist because according to him, if God truly existed, there was no way He would sit back and watch the human carnage and utter misery being unleashed upon Biafra. That lad later became the founder of the global technology giant, Apple Corporation.

50 years after all these well documented atrocities, Nigeria still carries on as if nothing had happened while contemporary politicians remained oblivious regarding the lives of those millions of Biafrans killed as collateral damage in the blind quest to restore the dead Federation of Nigeria by force instead of implementing the agreement that the Gowon junta freely reached in Aburi with leadership of the injured Eastern Region. The understanding at Aburi that there will be no resort to the use force in seeking a resolution to the disputations emanating from the events of 1966 was thrown to the dogs of war at Dodan Barracks, Lagos. The dead children’s blood still cries to high heaven to this day for justice and Nigeria won’t find any respite or a semblance of peace until the innocent blood shed in Biafra in order to confiscate our God-given natural resources and to hold, in perpetual servitude, the indigenous peoples of the Lower Niger on whose shoulders the destiny of Black Africa rests, is redeemed.

Overwhelming lethal force was used to drag the East back to the defunct “Federation of Nigeria”, which since 1970, had progressively morphed into a master-servant unitarist state unilaterally defined by the true purveyors of the military violence deployed against the East between 1967 and 1970, the Sokoto Islamic Caliphate.

That unilateral redefinition of the union of Nigeria is encapsulated and codified in the fraudulent 1999 Constitution imposed by that Sokoto Caliphate via Decree No 24 of 1999.

1999 Constitution was written under the direction of General Abdulsalami Abubakar who, subsequently, put the document into effect through the issuance of Military Decree No 24 of 1999.

Now that the wider violent conquest and colonization designs of that same Caliphate against the rest of Nigeria has become fully manifest, one of the principal actors on the side of unitary Nigeria in the 52-year drama of death, attrition and debilitation, Lieutenant-General Theophilus Danjuma, has confirmed to the whole World that the Armed Forces and Police of Nigeria, have been hijacked by the Fulani aristocracy and deployed to aid and advance a well-targeted ethnic-cleansing agenda. It is noteworthy that General Danjuma has publicly called on his minority ethnic nationality and the endangered rest of Nigeria to rise up now and defend themselves and their territories from death and conquest, instead of waiting to be defended by the “Armed Forces of Nigeria” which, according to him, were in collusion with the marauding Fulani herdsmen militia sweeping southward in an undisguised conquest and colonization campaign.

If anyone is in doubt that the moribund “Federation of Nigeria” has long collapsed and is now being taken over by a vicious Sokoto Caliphate that has seized the reins of power in Nigeria, (as alerted by the Lower Niger Congress since 2016 in a public communication titled “NIGERIA IS CRIMINAL ENTERPRISE NOW BEING TAKEN OVER BY A VICIOUS CALIPHATE”), that doubt should now be removed by this loud public battlefield cry emanating from the Hills of Mambila Plateau.

To General Theophilus Danjuma, I say: Welcome to the Morning after One-Nigeria.