Nigerian Leaders are Blind to Patriotism, Deaf to Cries of the Poor & Oblivious to the Coming Social Tsunami They Are Creating

A couple of years ago, I was in Dubai, UAE for medical reasons, no thanks to our decrepit Medicare system. The flight, medical, hotel and associated costs, being personally borne, burnt a very deep hole in my modest resources. I settled into a low budget but clean well-kept hotel.

During lunchtime, I sat at the hotel restaurant awaiting my order, when this well-spoken, aristocratic-looking Emirati in white robes and headgear walked to me smiling. He asked if he could join me. Of course, I was curious, my reporter instincts whirring. He sat. First statement: – You are a Nigerian.

I scanned his face to get a clue of what he was driving at and said to him: That was a statement, not a question. He nodded. I admitted he was right. But why? He smiled again and said “Nigerians were different from other Africans. They are confident people.”

Okay, that was a compliment. But it was the velvet glove covering the iron fist in a roundhouse punch heading for your midriff. For he went on to say, despite the obvious confidence and intelligence of Nigerians he has met, that he is shocked by some of what they come to do in Dubai.

He said he was drawn to speak with me because he was surprised to meet me in the low-budget hotel which only trader-type Nigerians usually use. He thought I was scrimping which in his view, was sensible and modest. It was not the usual “elite”-looking Nigerian behavior, he added.

So, what is the usual elite-Nigerian behavior in Dubai? To answer the question, my new friend asked me if there are hotels, event centers and hospitals in Nigeria. Puzzled, I nodded a yes and said: “Lots of them”. The conversation was getting really interesting.

He asked more questions: “Why then do Nigerians fly planeloads of people all the way from their country to throw parties, do marriages and hold corporate meetings in Dubai?

“Why are Nigerians buying up real estate and hotel rooms in Dubai? Why are they flooding the hospitals here?

“What is happening in your country, my friend?”

I was silent. What was I to say? Perhaps, he thought I was upset because he put his hand on my shoulders and said he was sorry if he said something wrong. “Don’t get me wrong, I mean no harm. The money from Nigeria is good for my business and country but I am intrigued and curious. If so many of our leaders in the UAE were to take out our resources to spend in another country, it will be absolutely unacceptable and be forcefully condemned as unpatriotic acts.”

What should I say? Defend my country, my people and leaders? I asked him: “What do you know of Nigeria apart from the folks who throng into your country?” He said there were three key things he reads from the media about Nigeria: oil wealth, massive corruption and extreme poverty.

I did not want the conversation to go on. I almost went on the defensive with usual Nigerian gra-gra posturing while words to counter him welled up to my lips. But I couldn’t speak. I was silent. Shame enveloped me. I could only say to him: “Now you know the reason for the corruption and poverty you read about.”

He looked at me awhile: “You are sad.”

He stood up and said he hoped he did not spoil my lunch.

We shook hands and he left.

Of course, my lunch was ruined. I kept thinking about the conversation and the huge joke my country has become in the comity of nations. Our brazen foolishness. Our capacity for evil. Our villages lack basic water and roads, but we burn billions on parties in foreign lands. Our hospitals and medicare are shambolic but our leaders burn millions of pounds in foreign hospitals across the world.

Our education system is disgraceful, but children of elites are pouring billions in dollars attending schools abroad. Our banks have no long-term funds and do transactions on hot, costly, short-term, money mostly from the public sector, yet our elites lead foreigners in moving billions of dollars in illicit financial flows from the country into private bank accounts, real estate, stocks and high profile living in foreign countries.

How can a people so hate their country to rape it with such rapacious venom? What did Nigeria do wrong to its public officials, its politicians, its army generals, its judges, its policemen, its governors, its local government chairmen, its heads of state, its people generally? Why are the people and its leaders so intent on ruining the country?

It was thus with heavy disquiet that I read the report that Atiku Abubakar, former Vice President and now the Presidential candidate of the PDP, took planeloads of his political stalwarts, mostly crooked men to Dubai for strategy sessions on how to win the 2019 elections.

Some report put the number of people that flew from Nigeria for the sessions at a rowdy 400. I do not believe that number. Still, it is beyond my ken, why Atiku had to hold his strategy session in Dubai. As my Emirati friend asked me: Are there no events centers and hotels in Nigeria?

Imagine what the flight tickets, luxury hotel rooms, food, man-no-be-allowance, and other spendthrift frivolities would cost for the crowds of “eminent” men invited. It must have been an invasion, a frivolous money spending invasion to the people of Dubai. My Emirati friend would probably smile to the bank but would also wonder why black men and indeed Nigerians are so dumb.

Imagine if the millions of dollars burnt in that Atiku’s strategy session jamboree in Dubai is spent in Obudu Ranch. Think of the salutary effects on local businesses, hotels, food suppliers and the multiplier impact on households and families. But we are not patriotic. Yet we seek to lead the nation we rape. Politicking, leadership are nothing but a game of greed. One that guarantees that their proboscis is stuck undisturbed in the national nectar.

But it is not just Atiku. Our President Muhammadu Buhari spent months and millions in public funds on his treatment in a London hospital. Is there any cottage hospital built by his administration anywhere in Nigeria in the past three-plus years? No. Are the teaching hospitals the horrible coterie of death management upgraded? No. Why are we like this?

Atiku and Buhari belong to a milieu that splurged in the sudden, newfound and unearned flow of petrodollars. It was the miliki milieu when leadership was impunity driven by soldiers with little or no pedigree. It was the milieu when guns, violence, corruption and moral decadence was standard fare. To steal was smart. To ignore court orders was power. 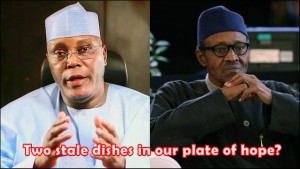 Buhari and his fellow Fulani kinsman, Atiku, are the two stale dishes on the dining table of Nigerian electorate in 2019 general elections. Replacing one with the other is a bewildering option for anguished Nigerians.

It was the My-Mercedes Benz-Is-Bigger-Than-Yours era. Today, it is private luxury jet is bigger than yours. General Yakubu Gowon defined the milieu back in the 1970s when he reportedly said: “Money is not our problem, but how to spend it.” He even paid the salaries of the public service of another country. The saving habit became old school. Productivity in agriculture and industry died. Morality crashed. For over 50 years until today, the nation’s resources are shared to thieves who haul it into foreign vaults.

The rot began long ago. It was the milieu when citizens cooked huge amounts of local foods, loaded them in large carriers here in Nigeria and flew the food with large numbers of people by Nigeria Airways planes for parties in London. It was a milieu defined by the statement: Enjoyment of Life Continues.

The men of that milieu, loaded with and corrupted by free oil money, corrupted the nation as well. Reason committed suicide. With truckloads of money, they hold on, until today, to the sinews of power. With a defective constitution, they consign national prosperity to the dustbin. With a decadent centralized system, they talk deceptively about national unity when they mean national treasury in personal pockets. They are blind to patriotism, deaf to cries of the poor and ignorant of the coming social tsunami they are creating.

The generations after them have been cowed or co-opted into the malaise of the Atiku and Buhari milieu. Today, our nouveau-riche young men and women take their marriages and parties to Dubai. They join cults to enjoy the power of impunity and shoot themselves dead over stupid disagreements. Student unions, market women unions, labor unions, professional unions, nongovernmental organizations etc the usual bulwarks of social and communal morality are infiltrated and turned into corruption dens. No more core values. The nation is sick.

I pity this country. Like in 2015 when Nigerians had to choose between the devil and the deep blue sea, so it will be again for the presidential elections of 2019. To choose between Atiku and Buhari is a no-win situation for the nation. The other contenders lack the political and financial muscles to make a dent in the elections.

So, Nigerians are left with either Atiku or Buhari. The men of a corrupt milieu who taught and still teach Nigerians to be corrupt. The men who have no scruples wasting money in foreign lands when they could easily have turned their country into Dubai, London, New York for foreigners to come spend money. The men who hold on tenaciously to a unitary constitution and a federation-account sharing of national revenues that have killed productivity, vision, progress and prosperity.

I weep for Nigeria. Again, the hard choice between the devil and the deep blue sea.