The meeting of the National Security Council presided by President Muhammadu Buhari on Thursday raised security concern over post-election violence and stockpiling of weapons by desperate politicians across the country.

A statement issued by the Minister of Defense, retired Brig. Mansur Dan-Ali, after the meeting, which was held behind closed doors at the Presidential Villa, Abuja, said disgruntled elements were bent on taking laws into their hands at the slightest opportunity.

The minister said: “The meeting also discussed an attempt to put pressure on the electoral body by some notable personalities through demonstrations which were brought under control by combined efforts of security agencies to avoid being hijacked by hoodlums or armed bandits. 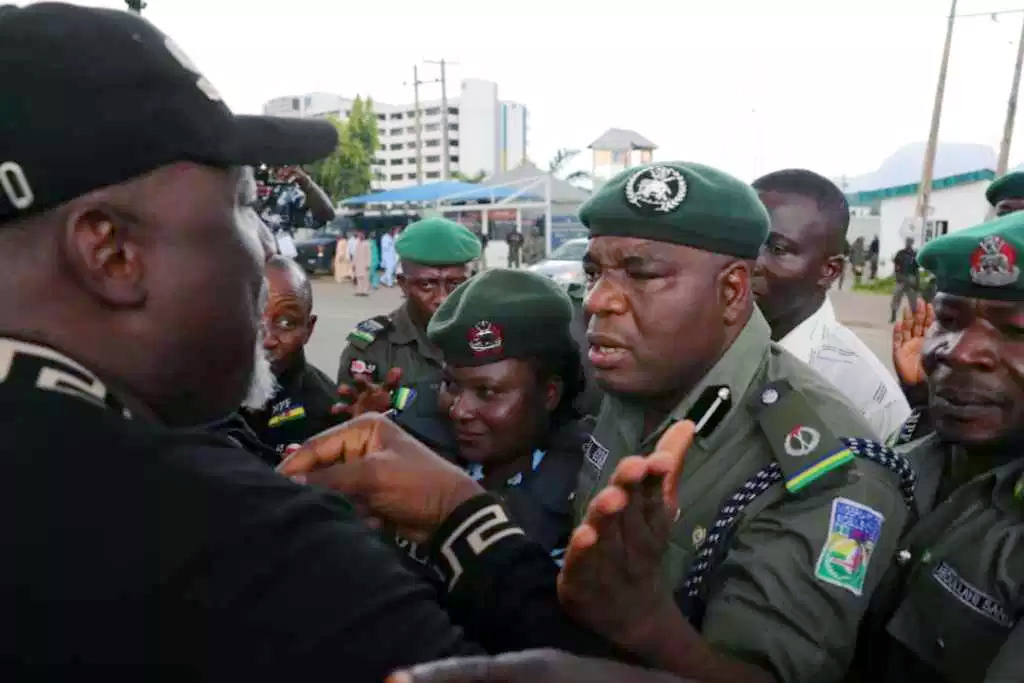 Elaborate state security forces deployed by the government in power to cow and suppress opposition politicians during electioneering season is commonplace. Even peaceful demonstrations are suppressed ostensibly to prevent them from being hijacked by criminals and miscreants.

“Another area of security concern includes post-election violence, as desperate politicians may whip up ethno-religious sentiments to create a security situation in the country.

“Also, of concern is the proliferation and stockpiling of weapons by some disgruntled elements with a desire to take laws into their hands at the slightest opportunity.’’

Dan-Ali said the meeting, however, recommended the deployment of security agencies to states for peaceful conduct of the elections.

He said the deployment would further douse the tension created by the outcome of the political parties’ primaries and some desperate persons to sabotage the electoral process. He said the council called for “concerted efforts of all security agencies to ensure that 2019 elections are hitch free’’.

The minister stated that the council stressed the need for continuous sensitization of the public by National Orientation Agency (NOA) and regular meetings of relevant stakeholders including INEC, international/local observers and the media ahead of the elections.

UN Security Council Warns Over Tensions in Nigeria, Others

A global body has warned against the continued violence across states in Nigeria – UNSC said it remained concerned at the security and humanitarian situation caused by Boko Haram and other armed groups – The body said these attacks have caused large-scale and devastating losses across these areas The United Nations Security Council (UNSC) has condemned the growing violence across states in Nigeria and it border countries.

The international body in a statement released on Sunday, August 12, said it is worried over the continued tensions linked to electoral processes, social and economic difficulties and conflicts between farmers and (Fulani) herdsmen in Nigeria and the Lake Chad Basin. According to the organization, it remained concerned at the security and humanitarian situation caused by Boko Haram and other armed groups.

Fulani herdsmen militia is well-equipped with AK47 rifles and other military-grade weapons. The paramilitary outfit is being sponsored by Myetti Allah Cattle Breeders Association of Nigeria (MACBAN) to procure and secure fresh grazing pastures and cattle routes that link them in Middle Belt & Southern Nigeria.

Vanguard reports that the UNSC said these attacks have caused large-scale and devastating losses across these areas. The state read: “The Security Council strongly condemns all terrorist attacks carried out in the region, including those perpetrated by Boko Haram and the Islamic State in Iraq and the Levant (ISIL, also known as Daesh). “These attacks have caused large-scale and devastating losses, have had a devastating humanitarian impact including through the displacement of a large number of civilians in Nigeria, Cameroon and Chad, and represent a threat to the stability and peace of West and Central Africa. “The Council notes with particular concern the continuing use by Boko Haram of women and girls as bombers, which has created an atmosphere of suspicion towards them and made them targets of harassment and stigmatization in affected communities, and of arbitrary arrests by security forces.

“The Council emphasizes the need for affected states to counter-terrorism in all its forms and manifestations, including by addressing the conditions conducive to the spread of terrorism, in accordance with obligations under international law, in particular, international human rights law, international refugee law and international humanitarian law,” the statement said. The UNSC further encouraged partners to increase security assistance to Lake Chad Basin Commission countries, and humanitarian and development support across the region for those affected by Boko Haram activities.

Meanwhile, Legit.ng previously reported that the UN secretary-general António Guterres has condemned attacks in Damboa, Borno state by men suspected to be Boko Haram insurgents. The UN chief expressed his condolences to the affected families and to the government and people of Nigeria and wished those injured a swift recovery. The attacks which targeted people celebrating the Eid el-Fitr left no fewer than 32 persons killed, while 84 others were injured when six bombers detonated Improvised Explosive Devices in Damboa local government area of Borno in Northeastern Nigeria.