When Will Africans Apologize for Their Own Role in Slavery & Stop Modern-day Enslavement of Africans by Africans?

Slavery, as an inhumane act perpetrated by Europeans against Africans, is only one side of the story.

The other side of the story is that Africans, whether as brokers, raiders, donors, slave merchants, facilitators, were complicit in the enslavement of fellow Africans and African-on-African slavery persists and thrives till this day.

Today, we hold that Whites owe reparations for slavery and Whites should be held responsible for all the reprehensible acts of cruelty against African slaves.

Agreed in part, but at what point will Africans take responsibility and offer due reparations, recompense and expiation for their own role in slavery?

My great grandfather, an Igbo puritan, handed over one of his sons to slave brokers because he wouldn’t stop vicing and apply himself to useful industry as all Igbo males were required to do.

Offering one’s relatives for slavery, usually for a fee, was one of the many categories of willful enslavement.

Slave brokerage was a thriving profession held by Africans in those days as were slave merchants who were the middlemen who collected slaves from brokers and sold them to White traders.

By the middle of the 19th Century, slave trading had become so entrenched in Igbo culture that slave mercantilism was an openly practiced trade in itself.

With all that Africans did to facilitate their enslavement, is it fair to absolve them of any responsibility in that evil trade?

And if modern-day Africans really appreciate the evil of slavery, would they be comfortable in the perpetuating of black-on-black slavery in other guises going on today?

Among Nigerians today, trafficking of girls for sexual servitude in Europe is alive and well. Just as in centuries past, the girls are lured by brokers into thinking that a decent job awaits them. Those stupid enough to be entrapped are eventually auctioned off as resident prostitutes to the whore houses of Europe where they are subjected to sexual slavery for a pittance. Many of them die in the process. Few that survive are emotionally wasted.

Yet as modern-day slavery, girl trafficking pales compared to the enslavement of Fulani herdsmen by wealthy cattle owners. The herdsman is a fully owned human chattel bred for cattle rearing and whose generations shall live for cattle rearing. He dwells in the bush with animals, has no education nor skill, and no predetermined remuneration in a multitrillion-naira business.

The Nigerian government ignores this modern-day slavery and cattle owners who incidentally control the government. They give no hoot about the inhumane working conditions of herdsmen, many of whom now armed to double as terrorists to advance the political agenda of their owners.

What riles one is that Nigerians of good conscience have not done their bit to end the enslavement of Fulani herdsmen. Whether it is out of ignorance or the product of abandoned conscience, Nigerians who still eat meat raised by Fulani slave labor without interrogating their conscience are participants in modern-day slavery.

We Africans should find it necessary to be in the frontline of the battle to extinguish slavery in all guises. 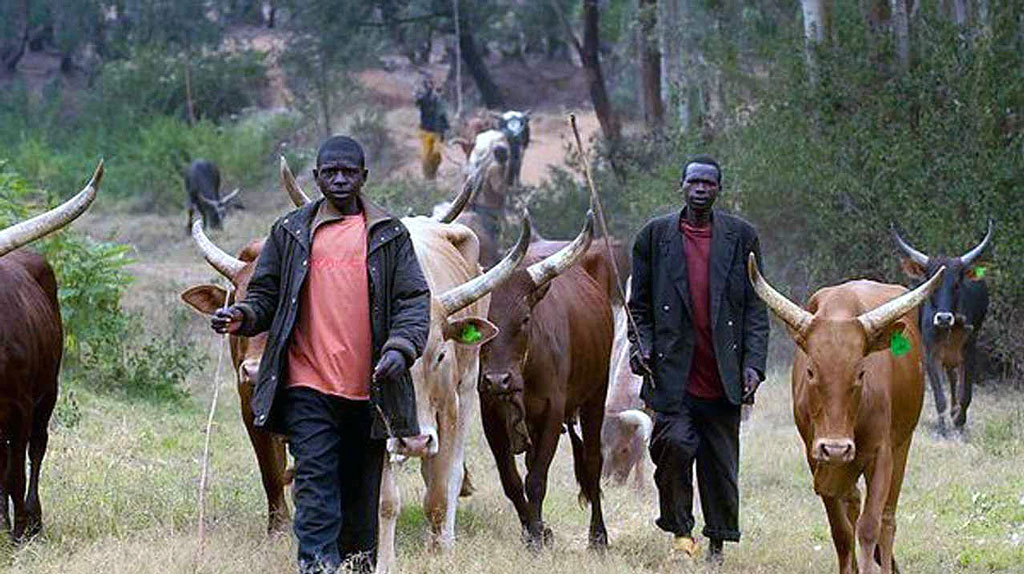 Fulani herdsmen militia fighters often disguise themselves as cattle herders. When needed, they are supplied with AK 47 assault rifles to raid targeted communities along their way from the North to the South.

All Nigerians have a moral obligation to wage war against girl trafficking and Fulani slave practices. Those who eat meat without interrogation, whether it is a product of slave labor, should find the courage to shame their conscience into stopping. Those whose forebears participated in slavery and who are enjoying social and economic prominence thereby owe as much a duty for reparation payment as do Whites who enjoyed wage-free labor from African slaves.

If Black lives truly matter to Blacks, then modern-day Black-on-Black slavery should no longer be condoned.