When our fellow countryman, Chinua Achebe, wrote his novel “Things Fall Apart” in 1958, he anchored this title on the belief that the coming of the Whiteman to Umuofia had brought an irreversible schism to the fabric of a once peaceful, organized and culture-based social setting in Africa, especially to the peoples of the lower Niger Basin in Nigeria.

The Whiteman had brought with him an alien judicial, cultural and religious pollutant that was anathema to the hitherto organized African setting and way of getting by. Many Africans, who embraced this new way of life, were viewed with high suspicion by fellow natives. But then, it was this band of social deviants who were embraced and empowered by the white colonialists. The so-called deviants were the ones who sent their male children to school and were naturally set to step into the shoes of the departing colonialists after flag independence in many of these African countries.

The coming of the Whiteman changed many things in Africa for good and evil.

Nigeria, nay sub-Saharan Africa, can never remain the same again after this Covid 19 Pandemic. This invisible virus has shaken the world to its very foundations and like people say, “If gold rusts, what will iron do?” In place of gold, put Western countries, and in place of iron, put Black Africa and Nigeria.

Just about a year ago or less in Nigeria, the country was abuzz with politicking. The struggle to capture power for its sake was live and real. In carnival-like political campaigns, politicians danced and frolicked with masses to the heavy music of Naira, Marley, Davido, Patoranking and many other musicians. The poor and wretched got cups of rice, some Maggi cubes and salt. In some areas, socioeconomic empowerment meant the purchase and distribution of “shoeshine” boxes or wheelbarrows to those sentenced to a life of penury and disease. Those who grabbed power knew they got it all.

In Africa, winning an election is like winning a lottery. The money that follows comes like a torrential downpour. Sometimes, the politicians who are the beneficiaries have so much of it that they start acting like spoilt kids with expensive toys. They do all sorts, including driving ordinary folks out of supermarkets until they were done shopping. They did all kinds of crazy things and still do. 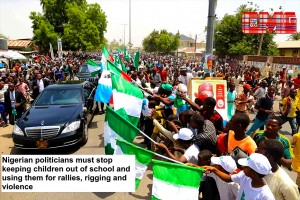 With a promise of food for the day, hordes of Almajiri homeless children and youths flock to political operatives who may then use them as thugs and rented crowds during electoral campaign rallies. These urchins are made to stash ballot boxes during elections in favor of who pays the piper.

The conquered masses – yes conquered because politics here is considered a conquest, and that is the reason why such expressions as “capture” and “seize” are used to refer to winning in particular areas – are often left to their fate. The conquered masses return to their routine lives of drudgery and daily struggles, which they call hustle – what the Igbo refer to as “Ike kete orie“, which literally means survival of the fittest.

It is a jungle out there for most Nigerians because, for them, it is a daily struggle to find food to eat. With leaking roofs over their heads, and their children playing football around open sewage systems called gutters, life goes on. Meanwhile, those who canvassed for their votes live in grandeur and opulence in specially designated areas for the rich and famous. A tremendous and yawning chasm, therefore, separates the rich and poor in our country. Forget about the middle class because it is nonexistent. Many who thought they belonged to the middle class had recently seen themselves at the very low rungs of the socioeconomic ladder. However, they struggle in pretense to carry airs of belonging to an extinct class.

Then comes the Covid 19 virus. All hell broke loose. The boundaries between the dwelling place of the rich and powerful and those of the groveling poor and wretched became as thin as the edge of a blade razor. With the order to quarantine or lockdown, our cities became prison yards. I will prefer not to use the more fanciful term of correctional centers.

It was convenient for the rich to get secluded in gated properties living out the lockdown period of two weeks or so. The poor were confused. Living from hand to mouth was what they were used to. What does lockdown mean? They could not understand this. Orders were issued for families to stockpile food items to last them for a period of two weeks. One family said they had only one Derrica of rice (a measure in Nigeria using a tinned tomato can with that brand name), a tuber of yam and one pot of egusi soup. They wondered how they were going to survive but order na order now. Law enforcers were all over the place to ensure compliance. It became evident that it might be challenging to rein in the poor because “man must wack”.

I saw a truck with the sign “No food for lazy man” inching its way to a local market in the East that had been shut down because of the scourge. The driver and his truck got arrested. Just like in the movies, on cue, individuals started trooping out from their homes to intercede on behalf of the driver. One man even said that he had no food to eat and yet he had never been a lazy man. The soldiers on duty were very professional. They weighed the situation, let the driver go with his truck and counseled the local folks to disperse peacefully. It could have gotten worse.

The poor have been dying of preventable ailments due to malaria, snake bites, typhoid fever, meningitis, polio, HIV without Medicare. To them, Coronavirus or no Coronavirus (which they have nicknamed Coro), they must move around to eke out a living. The rich fear an implosion whereby millions of poor people could contract the virus and spread it to them. The poor argue that Coro is a disease of the rich who spend weekends in Dubai, get medical treatment in the UK and holiday in Las Palmas.

No one can guess how this will end, but rest assured that things have fallen apart. The insensitivity of those who wield power in many African countries has been laid bare. Easy money is likely to dry up for countries that depend on revenue from oil. Elections would no longer hold any meaning to the masses. Experts are predicting mass disobedience and revolutions in many countries. In Nigeria, some are calling on the government to let NEPA (the popular name for the Power Company in Nigeria) distribute to the people the billions of naira meant as palliative. The argument is that NEPA officials know all the dwelling houses of people in Nigeria. The zeal with which they perform their duties of distributing bills and disconnecting homes from the grid could be brought to bear here. I am in support.

Things have fallen apart and only an organized and well-intentioned handling of the dicey situation could save the day. The time for grandstanding and issuance of hollow and insensitive orders is over. The masses are on edge and are very suspicious of the government. Only a caring government that is concerned with the plight of the suffering masses can paddle this leaking and sinking canoe to shore from the brackish waters of ruin.

The tiny virus has shaken the faith of many also. The craze for anointing oil, holy water and wait and collect miracle workers have abated. On lockdown, some pastors are defiant and see it as an order to stifle evangelism. Some say na lie, that these ones are after tithes and offerings without which grandiose lifestyles would disappear.

This virus, “e no go better for you”.