As the obviously failed Buhari presidency approaches the end of its second tenure, Nigerian stakeholders are becoming increasingly anxious about the future, especially as the INEC-scheduled 2023 general elections draw nearer. Political parties have busied themselves with the conduct of preparatory steps toward the general elections. In politicians’ calculus, all that matters is winning the next election and retaining power, if possible, indefinitely. But for the Nigerian Indigenous Nationalities Alliance for Self-determination (NINAS) the end of the Buhari administration coincides with the climax of a devious agenda by the irredentist Fulani for Nigeria – comprising military conquest through terrorist insurgency, contrived marshall rule and electoral heist as was effectively rehearsed in 2019. The indigenous stakeholders of the South and Middle Belt, who constitute the Alliance, deem it essential to clearly state their unified stance as the country braces to transition from the rule of a well-known Fulani irredentist, President Muhammadu Buhari. This is what this video is all about.

NINAS mission is driven by the understanding that all the woes of today’s Unitary Nigeria are caused and perpetuated by the imposed fraudulent 1999 Constitution which is seen as an ordinance created to serve the primary interest of the irredentist Fulani and the Sokoto Caliphate to take over ownership of Nigeria’s geopolitical space from the indigenous owners who are, in turn, made to become slaves in their own ancestral lands. NINAS’ raison d’etre is to mobilize the indigenous nationalities of the South and Middle Belt to combine their effort and resources to negate and scuttle the devilish agenda of the irredentist Fulani on Nigeria. The arrowhead of the NINAS’ struggle is the total abrogation of the 1999 Constitution that is currently tying the hands of the indigenous nationalities of the South and Middle Belt while, at the same time, granting the impetus for impunity, arrogance and belligerency of the Fulani ethnic nationality that is responsible for scheming the imposition of Unitarism on Nigerians to replace the regional federalism negotiated by the country’s founders at Independence from British colonial rule.

NINAS’ decades-long struggle culminated in the proclamation of Constitutional Force Majeure (CFM) on December 16, 2020 which clearly explained the sovereignty dispute that has resulted in the seizure of the lands and assets of the indigenous nationalities of the South and Middle Belt by the scions of the Sokoto Caliphate who wrongly claim that the entire Nigerian geopolitical space was gifted to a Fulani ancestor, Sheikh Uthman Dan Fodio, by Allah as a reward for executing the 1804-08 jihad in Hausa land. This factitious contrived belief is what has propelled the Fulani hegemonic ambition in post-colonial Nigeria. NINAS is the engine driving the self-determination quest of hundreds of indigenous ethnic nationalities who constitute the overwhelming majority of the stakeholders of Nigeria. It should, therefore, not be a surprise to anyone that there are more important matters in the mind of the NINAS leadership echelon beyond just who or which party aces the rest during the 2023 general elections. 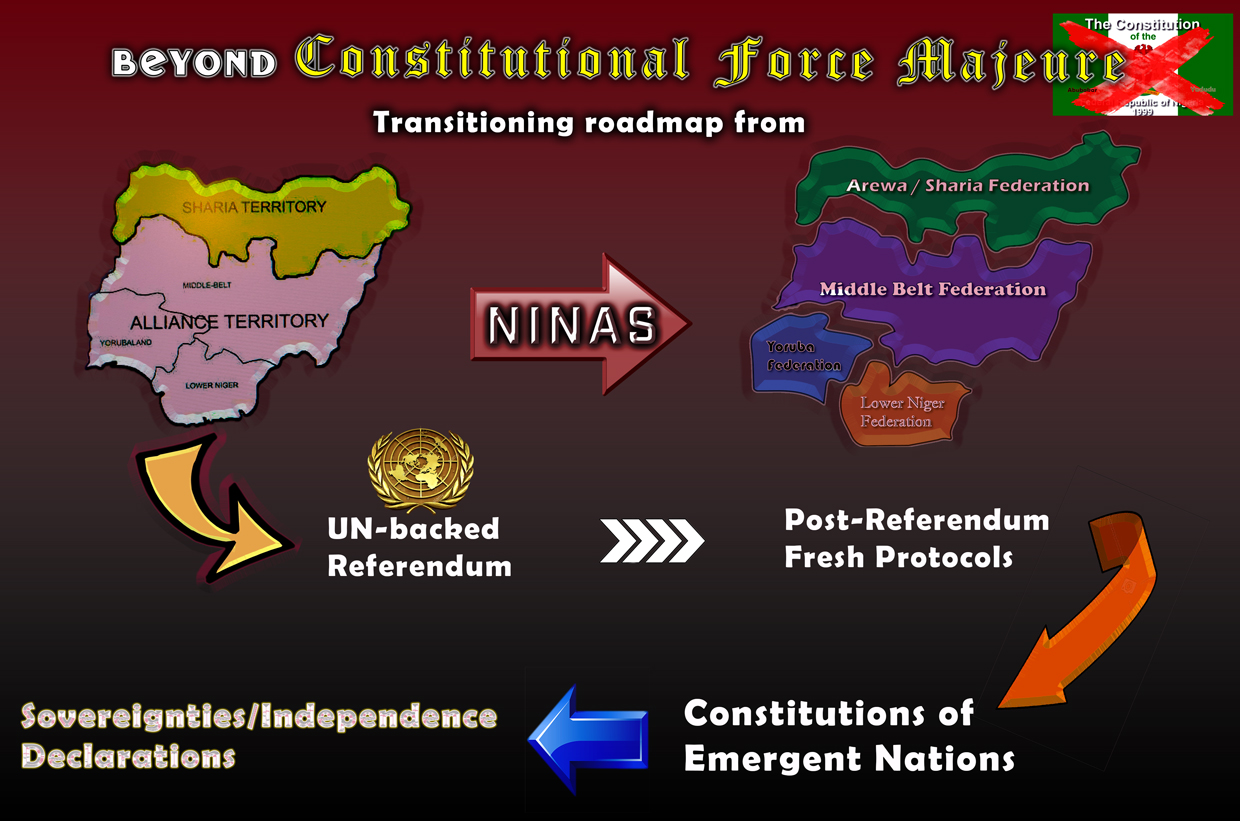 The failed Nigerian Unitary state being propped up by the widely repudiated 1999 Constitution must give way for the emergence of a new political order that the majority of the citizenry to live with and thrive. NINAS is center stage in this transformation for the better.

It is with the preceding backdrop that one should review and hopefully, better appreciate NINAS’ official stance regarding the 2023 general elections and the leading candidates and partisan formations in that electoral contest. Before the emergence of the Peter Obi phenomenon, NINAS had stuck firmly to its CFM of December 2020 that enjoins all Nigerian stakeholders to stop the stampede to the INEC-scheduled 2023 general elections and instead to focus all attention and energy on initiating a political transition process that shall deliver the just self-determination quest of all the indigenous ethnic nationalities of the South and Middle Belt. The ongoing mass mobilization of the electorate through the PVC registration process, especially among the youths and grassroots population in recent months, has indicated that the large partisan formations, APC and PDP, are likely to be swept at the 2023 polls. The possible emergence of a new governance order in Nigeria in 2023 compels NINAS to restate and clarify its stance, once more, to eliminate any misconceptions by all and sundry.

Thus far, the favored presidential candidate of the Labor Party, Mr. Peter Obi, has focused his campaign message primarily on the candidate’s economic agenda as the main deliverable if elected. In this video, the NINAS’ Secretary-General, Mr. Tony Nnadi, redirects the Obi presidential campaign to the most critical issue that cripples Nigeria and keeps millions of Nigerians in abject poverty in the so-called land of plenty. The two contending presidential candidates from the APC and PDP, from the perspective of NINAS, are spent political forces with the agenda to continue with the status quo if elected in 2023. Besides, the APC/PDP clones are blamed for colluding with the scions of the Sokoto Caliphate in foisting the widely repudiated and rejected 1999 Constitution on the stakeholders of Nigeria for more than two decades. The future path to redemption has no role for these failed worthless partisan political formations. They shall be consigned to the dustbin of history come 2023.

If Peter Obi emerges victorious, his new administration can only succeed as well as get the massive support of the NINAS’ Alliance Territory if the deserved priority attention is given to addressing the immediate elimination of the imposed fraudulent 1999 Constitution.