(Being the text of the statement presented at a World Press Conference by the Nigerian Indigenous Nationalities Alliance for Self-Determination, NINAS, on the 17th day of April 2021 at the expiration of the 30-day period of consultations with elected officials from the Alliance Territories following the expiration of the 90-day period of Notice of Grave Constitutional Grievances issued the Federal Government of Nigeria by NINAS, December 16, 2020.)

Ladies Gentlemen of the Press:

As Nigeria continues to wobble in the throes of what seems its sure demise as one political union, we welcome you all warmly to this very important milestone in the carefully programmed advancement of the objectives of the December 16, 2021 Constitutional Force Majeure Proclamation of sovereignty dispute arising from Grave Constitutional Grievances of the constituent components of Nigeria that must now be addressed by the operators of the Nigerian State. Today, the train of NINAS’ consultations and engagements on the December 16, 2020 Proclamation moves on from the Government of Nigeria to the peoples of Nigeria who are the true owners of the sovereignties forcefully aggregated and federated as Nigeria, hence the Press Conference Theme: “Activating People’s Power”.

Let it be recalled:

Suddenly and curiously, the Caliphate North, which had for decades been adamantly opposed to the countrywide consensus on the restructuring imperative for Unitary Nigeria, declared that they were now ready for Restructuring but that they would not allow power rotation, an indication that the Caliphate North is still stuck with their born-to-rule mindset and is merely trying to buy time for itself by pretending that it now accepts the Restructuring Therapy for the terribly sick Nigeria. 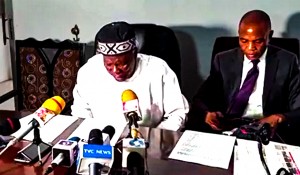 Prof. Banji Akintoye, on the left, reading the text of NINAS’ press release in Ibadan, the capital of Oyo state, Nigeria to mark the expiration of the 90-day deadline given on December 16, 2020 to Pree3sident Buhari to respond to a 5-item demand contained in the Constitutional Force Majeure (CFM) Proclamation.

In particular, the governors of the states in the Alliance Territory were advised to liaise with one another, send bills to their various State Houses of Assembly and work with the Assemblies to Pass Laws by which they assume responsibility, power and control over most of the subject matters contained in the 68- Item Federal Exclusive Legislative List of the 1999 Constitution by virtue of the Federal Government having previously confiscated all powers over those subject matters, especially powers relating to security, economic assets, infrastructure or other subject matters.

We further report that in what seemed like a choreographed response from agents of the Federal and State Governments of Nigeria to the NINAS Grand Propositions, attempts were made to distort, obfuscate and even criminalize the straightforward Self-determination Campaign of the Aggrieved Constituent Component Blocs of the distressed Federation of Nigeria, in a desperate bid to erect a false narrative around that campaign.

Terms like “SECESSION” were smuggled into the debate and a section of the media, obviously in cahoots with agents of Caliphate Nigeria, promoted this false narrative, with a former presidential spokesman, Reuben Abati, describing the Self-determination Campaign as “TREASON” in a poorly scripted maneuver to lay the grounds for criminalizing the Self-determination Campaign.

These shallow shenanigans aimed at introducing confusion into a subject that has been very clearly articulated both within Nigeria and in the critical decision-making locations across the world, failed woefully as more and more people and groups across Nigeria step forward to embrace the DIAGNOSIS, PRESCRIPTION and TREATMENT options offered all by NINAS for both the terminally sick Nigerian State and Nigeria’s constituent component nations currently trapped in the failed Lugardian experiment of 1914.

WHERE THINGS ARE RIGHT NOW WITH THE DISTRESSED FEDERATION OF NIGERIA. LET IT BE KNOWN TO ALL:

NINAS offers the framework for activating this de facto governance imperative which begins with providing clear directions to our traumatized peoples and relating to the international community on their behalf.

GOING FORWARD, SINCE THE TWO TIERS OF GOVERNMENT IN NIGERIA HAVE ABANDONED THE POPULACE TO THEIR FATE, NINAS’ ACTION TRAIN NOW MOVES TO THE PEOPLE:

Having allotted a total of 120 days to the two tiers of government in Nigeria (90 days and 30 days to Federal & State Governments respectively) for consultations and engagements with the issues raised by the NINAS’ Constitutional Force Majeure Proclamation of December 16, 2020 and for the same reasons stated in paragraph (v) above regarding the foreseeable immediate impacts of reconsideration of allegiance to the distressed 1999 Constitution on persons to whom the demands of December 16, 2020 were not addressed, the NINAS train of consultations and engagements will today April 17, 2021 move on to the peoples of Nigeria, especially in the Alliance Territory, who collectively own the sovereignties forcefully consolidated and hijacked by the Nigerian State via the instrumentality of the imposed and fraudulent constitutional arrangements of 1999.

In this period, all segments of the Nigerian society in the Alliance Territory shall be consulted and engaged with the NINAS propositions as outlined in the December 16, 2020 Constitutional Force Majeure Proclamation and these will include Grassroots Organizations, Young People, Youth Organizations, Political Parties, the Media, Church Networks, Regional Sociocultural and Sociopolitical Organizations, Organized Private Sector, Farmers Union, Traders Associations, Trade Unions, ASUU, NUPENG, Artisan Unions, Nongovernmental Organizations, Organized Labor, Market Men and Women Associations, Students and Students Unions, the Nigerian Bar Association, the Nigerian Medical Association and such other Professional Groups, the Nigerian Diaspora, especially those from the Alliance Territory, the Manufacturers Associations, Transport Unions, including Motorcycles and Tricycle Riders and all other identifiable segments of society that may not have been listed here. Also, Identifiable statesmen and notable community leaders including traditional rulers.

(A Schedule of Engagements with these segments of Society listed hereinbefore shall be released to the public in the form of weekly Bulletins, by the NINAS Secretariat).

These Consultations shall mostly take the form of Town Halls, Mass Dissemination of Fliers and Leaflets, Pamphlets, Audiovisuals, Street Evangelism and Visitations. The Town Hall Meetings shall be Virtual in some instances considering the limitations currently imposed on the Global Community by the Covid-19 Pandemic. The Nigerian Diaspora Community, especially those from the Alliance Territory, are hereby mandated to organize town halls in their countries of residence to discuss and disseminate CFM-related Information just as it is being done in Nigeria.

As a part of the engagements in this 120-day period, NINAS requests all organizations and individuals who agree with the objectives of the December 16, 2020 Constitutional Force Majeure Proclamation, to declare their support loudly in public so that the task of enlightening, rallying and mobilizing the populace to Self-redemption may be expedited. It is in this context that NINAS wishes to acknowledge and hail the bold example of Pastor Paul Adefarasin of the House on the Rock Church, in identifying the Foundation of Nigeria’s complex problems to be Nigeria’s Constitution, describing Nigeria as a SCAM and a FRAUD, also rejecting further access to power (i.e., national elections) under the Toxic 1999 Constitution. NINAS challenges other men and women of God in Nigeria to speak up as loudly and clearly as Pastor Paul Adefarasin has done on this raging question of the Union Dispute. Silence will be interpreted as support for the forces of darkness and retrogression that impose and maintain the atrocious Unitary Constitution on a Federal Union.

Even in the midst of escalating insecurity, existential threats, excruciating poverty and hopelessness, the purpose of these consultations is to fully acquaint the populace with the true nature of the problems confronting Nigerians and Nigeria, with a view to rallying and mobilizing that populace towards the peaceful mechanisms for resolving the long-standing national questions of Nigeria, including Referendums and Plebiscites, as against the rapidly increasing drift toward self-help.

As we speak, the Yoruba are already gathered at the historic Mapo Hall in the Great City of Ibadan, the National Capital of the Yoruba in the disputed Nigerian Union, holding the kind of rally that will progressively characterize the NINAS’ Consultations with the peoples of Nigeria.

Finally, as a general response to the deluge of inquiries from the public regarding what the mission and makeup of NINAS are, permit us to clarify as follows:

NINAS is an acronym for: “Nigerian Indigenous Nationalities Alliance for Self-determination”.

2019 was the last time that general elections would be conducted to extend the life of the widely repudiated imposed fraudulent 1999 Constitution. NINAS’ vision for the future is predicated on the MNN broken map.

The main task of NINAS is to lead the dismantling of the imposed fraudulent 1999 Constitution to end the unworkable Unitary Union it foists and to champion the processes of Self-determination by which sovereignty is restored to the constituent regions of the Alliance.

This dismantling, which automatically frees up the hijacked sovereignties of the trapped constituent components of Nigeria, is being driven in a manner that will precipitate an orderly transitioning arrangement that will midwife the emergence of successor-constitutional protocols, anchored strictly upon the Self-determination rights of the constituent components of the defunct Federation of Nigeria, aggregated in formations of their choice, to be ratified by Regional Referendums and Plebiscites.

While NINAS shepherds the task of dismantling the 1999 Constitution, the constituent regional organizations/initiatives will, under the guidance of NINAS, midwife the emergence of cohesive Regional Charters/Constitutions that will form the basis of UN-SC Mandated Self-determination Referendums to terminate the failed Lugardian experiment of 1914.

Thank you for your Audience.