ALLEGATION: ‘According to this writer, the IPOB chapter in Germany was ordered by their London-based “supreme leader”, Mazi Nnamdi Kanu, to launch the attack on the visiting Senator Ike Ekweremmadu.’

RESPONSE: That is not necessarily the case. Nnamdi Kanu did not (specifically) order the attack on Ike Ekweremmadu.

The attack was a freak coincidence. It is more like what one would call a “scapegoat” doctrine. Ekweremmadu was it – that proverbial scapegoat that took the brunt of the punishment to send a badly needed lesson, nonetheless. The reason I know this is because I listened to Nnamdi Kanu’s broadcast from Nuremberg a few days before (Ekweremmadu showed up at) the Iri-Ji Festival, asking the Igbo Germans, emphatically and repeatedly, what type of demon would possess them to invite someone as “Nnia Nwodo who has confessed that he sabotaged the Biafran War and would equally sabotage the current agitation for Biafra’s independence”.

From the look of things, it did not appear that the people he (Nnamdi Kanu) was speaking to were interested in rescinding the visit, which they had already extended to (Ike Ekweremmadu) and the apex Igbo organization leader, Chief Nnia Nwodo. But it must be noted that Nnamdi Kanu never once mentioned Ekweremmadu’s name.  The only name he hammered ad nauseam was Nnia Nwodo.

In a way, Kanu was actually pleading with them not to allow Nwodo to come to Germany for the Yam Festival or any Igbo function at that – anywhere in the world. Kanu not only hates Nwodo and what he stands for, but he also despises that man.

And I cannot say that I blame Kanu, because I have, personally, listened to Nwodo myself on numerous occasions, and I can tell you, without fear of contradiction, that the “Igbo elder” clearly represents what the Igbo axiom: “Okenye no n’ulo, ewu amuoo n’obu”. It means that it is quite a disgrace, or perhaps, an abomination for “an elder to watch a pregnant doe deliver a kid while tethered”. To that, the Igbo would say, TUFIAKWA!

Nwodo is no elder to emulate in the fight for any type of freedom – talk less of Igbo emancipation or Biafra independence. In fact, it is welcome news to know that the man’s tenure as Ohanaeze leader ends at the end of this year being 2019. I say Amen to that. Hopefully, the group would not have another stooge as this Nnia Nwodo. I am sorry to say that, but anyone who takes the time to listen to this man’s antecedents would agree that the man is, certifiably, a bona fide almajiri slave errand boy.

Could you imagine that just recently, the same Nnia Nwodo blamed the Igbo as being responsible for the killings in the Southeast and laying the blame on Fulani herdsmen! What manner of man would say something like that, assuming it is even true that the Igbo youth are responsible for all the herdsman-cattle-related troubles in Igboland!

The man in his grandiose delusion is still talking about “Restructuring” (going back to the former regions).  How utterly hopeless could any Igbo person be to adamantly hang on to such worthless expectations that have no basis in fact – absolutely none, whatsoever! Yet, he clings to it as a religion. But the irony, also, is that the same Nwodo helped draft the 1999 Nigerian Constitution that the restructuring school of thought is complaining about. And he is shouting the loudest about restructuring, just like the turncoat in the midst that he is. The man is dangerous!

ALLEGATION: ‘The incumbent President-General of Ohanaeze Ndiigbo, Chief Nnia Nwodo, was expected to attend the Nuremberg event and then canceled at the 11th hour.’

ALLEGATION: ‘The unanswered million-naira poser now is whether the treatment meted to Senator Ekweremmadu was also intended for Chief Nwodo too if he had shown up?’

RESPONSE: The answer is that the treatment was without an iota of doubt intended for Nnia Nwodo. The treatment was not intended for Ike Ekweremmadu. It was an accidental occurrence which still served the purpose for which the punishment was intended, no matter how the “yam” (no pun intended) is sliced. 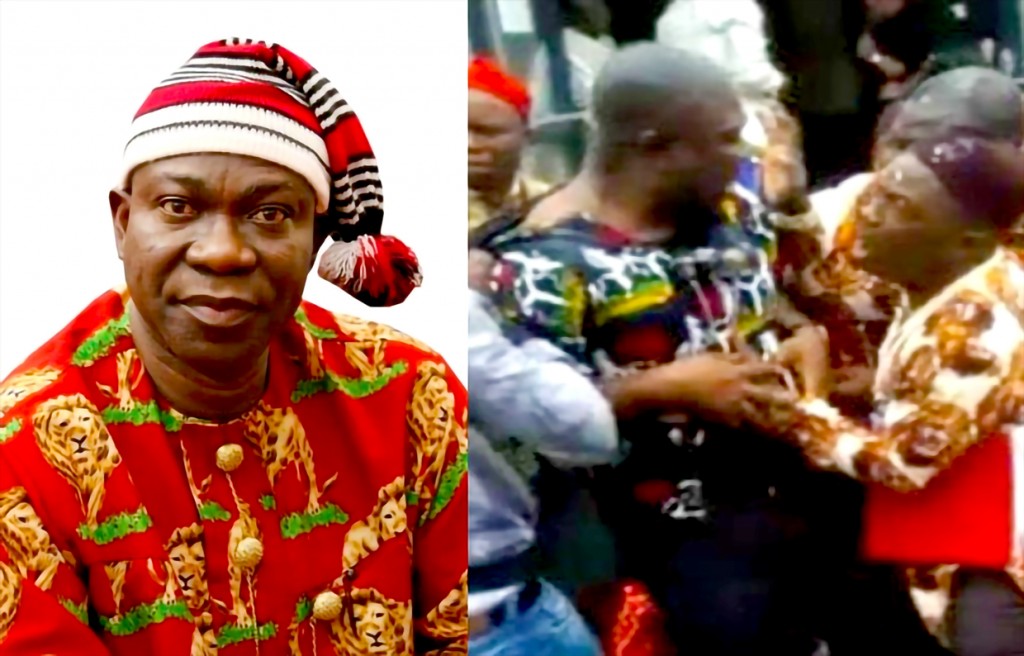 Senator Ike Ekweremmadu was former Deputy Senate President during the preceding 8th National Assembly of the 4th Republic. He is thus perceived to be one of the key drivers of a Unitary Nigerian state that is at the brink of catastrophic collapse.

To buttress the point, just in case you are still not getting it, Nnamdi Kanu after the attack, explicitly, stated that the man they were expecting to accost was Nnia Nwodo. Kanu said he was lucky that he did not show up. But he did not demonstrate any remorse that Ekweremmadu took the beating instead. Works well if you asked me. Lol! The Igbo have a saying that goes something like this: “Nwoke Aru (as in Arochukwu) mee gi ihe gbaa oso, I hu nwanyi Aru, megwara, n’ihi nwanyi Aru wu otu Aru a hu.” It means if a particular member of an organization offends you and then escapes punishment, you are free to take out your revenge on any other member of the same organization that you run into. In other words, they (all the members of this organization) are all bloody guilty by association. Nnaa, these Igbo people sef! Na waa for them o!

Laugh no ‘gree’ me type. Yup! Imagine being a member of a robbery gang and claim that you are different because you have never personally gone out with the rest of the group in any active operation. You are still guilty by association.

Those who are against IPOB are infuriated that Ekweremmadu was needlessly attacked because he helped negotiate Nnamdi Kanu’s release from Kuje Prison. It does not matter because Kanu’s version is totally different. No matter whose version is right, the point still remains that if such unrepentant rudeness was meted out to the supposedly not-so-guilty Ekweremmadu, then imagine what would have happened to Elder Nnia Nwodo that the IPOB members view with even greater scorn!

NOTE: Now, you have the answer to “the unanswered million-naira poser.” How do you want to pay? By check or by wire transfer?