Nov 18th Electoral Contest in Anambra Was a Referendum on Biafra, Not a Vote for Willie Obiano

I had a rude awakening this morning to realize that “Biafra Referendum” took place and all those who have been agitating for the sovereignty of our pet nation were feasting on “Ofe Nsala”. I had a rude awakening because as I took an intellectual journey into the fascinating universe of good governance otherwise known as OHOnization; thinking that since Biafra is taking time in coming, let us consolidate the dividends of democracy, my folks were mired in the pool of the blood of our compatriots who have been brutally murdered at various times of our history and were cashing in on what seemed a legal and constitutional forum to vote Biafra referendum. As I awake this morning, I saw Biafra. All hail Biafra; the Land of the Rising Sun! Let me also thank Ndi Anambra for a job well done on Nov 18, 2017.

I have already written that APGA won this election with identity and protest votes; identity with Anambra (Nke a bu nke anyi); protest against APC, i.e. federal might.

In the first place, the average Onyeigbo believes he has no place in Nigeria and more so in the APC government. Consequently, “Nke a bu nke anyi” resonated with Onyeigbo who needed a sense of belonging; as it were, Anambra State was the place of the moment to belong. It was amazing for me to realize that every concerned Onyeigbo, irrespective of state of origin, was emotionally connected to the Anambra State politics; understanding it as the last bastion for Ndiigbo. APGA was the safe haven in this fortress. This APGA is not the establishment or leadership of a political party; it is the spirit of Ndiigbo rising again as a political movement.

In the second place, the dynamics of Anambra politics changed with APC grand-finale rally; a rally that sounded like a war cry to dispossess Ndi Anambra of their own by force. The utterances of Buhari as to making little of the bloodshed during Operation “Python Dance” II and the demand of Rochas Okorocha for Buhari to give Ndi Anambra Tony Nwoye were the climax of that rally; speeches which any average Onyeigbo would understand as denigration and threat. As a result, they unknowingly alerted Ndi Anambra to defend their home front before they will be overcome by federal might. To cap it all, PDP rallied the next day to pitch their tent at the other end of the divide poised for the war to begin. The posture of these two national political giants was enough to threaten the last stronghold of Ndiigbo and Ndi Anambra saw it as a bounden duty they owe to Ndiigbo to save the day. APGA became the safest haven to hibernate and avert that looming danger.

I had opined that this was not a vote for Willie Obiano. Now, I say this is a referendum on Biafra with a fiat handed over to Chief William Mmaduaburochukwu Obiano. I had also averred that Ndi Anambra had conjured Ijele; Willie Obiano has become “Mmanwu Ndi Anambra”. Mmanwu is made by initiates; it does not make itself. “Mmanwu na-eti onwe ya” is a misnomer. Mmanwu is a corporate identity of the community. It is in this understanding that I advocate again, those who can should let him know:

It could also be said that Anambra is an independent state; this consistent isolation is an emphasis. Obiano should expect frustration from Abuja and Oha-Ndi-Anambra should rally round to build the consciousness and structure of a federating unit that can function on its own. Let us look beyond the frenzy and euphoria of this victory and brace up to speed with the decision we have made. 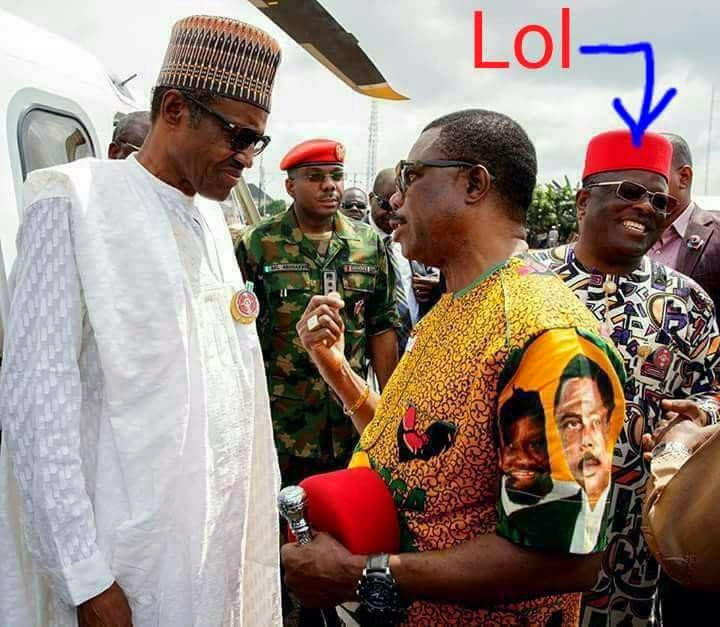 Gov. Obiano of Abiano of Anambra state (front right) talking to President Buhari (front left) during the latter’s visit to the Southeast to campaign for the losing APC candidate for Nov. 18th Anambra governorship election.

This is the time to begin the journey to sovereignty. Peter Obi’s APGA was a strong PDP ally and therefore, connected to the center, Obiano’s APGA is a stand-alone party and has proven to be integrally Igbo.

Now that the election is over, we should get focused and set the agenda going forward. Sitting back to taunt, blame, agitate, complain, smear or even drink champagne, is a distraction. The governor should hit the ground running. No time.