Peter Obi is everything he claims not to be – a fake who, by acts of destiny, stepped into public service deceiving gullible Anambra people who like fanfare and fluff. Obi’s content is marginal, but in a society that is devoid of logic and reasoning, Obi excels.

I met him twice – each time, I was “smh”. He seemed to avoid anything that requires deep intellectual thoughts. If he senses one is packed with the firepower of intelligence, Obi steps aside. He loves to command what people should know and how they ought to respond. 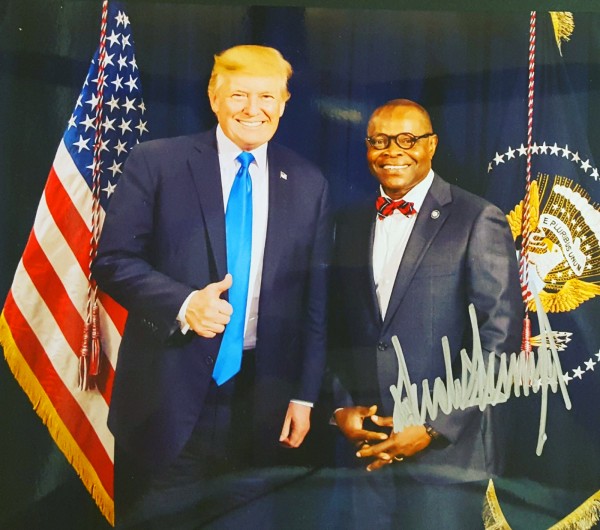 Mr. Ejike Okpa II of Dallas, Texas poses with US President Trump at the White House. Mr. Okpa is a strong supporter of the Republican Party.

It does not take a lot to impress Anambra people if you can imagine that in Anambra, Andy Uba is a senator, his younger brother Christian Uba, who never finished high school, once controlled the state. Emeka Wilson Offor, a “Money-Miss-Road” who, while at Merchants of Light School, was rusticated because of bad conduct, are all pillars of today’s Anambra.

Atop the heap is notorious Arthur Eze – the so-called “Arthur One Thousand” who when he speaks, one would think that one is listening to a 5th grader.

Arthur’s claim to fame was as IBB errand boy. When he, Arthur, wanted to decide who was going to be Enugu state governor in the early 1990’s, Chief C. C. Onoh was pointed in telling him to stay within Anambra or he would risk getting thrown out. Arthur got the message.

To deal with typical Anambra person, one must stand up to him. If not, he would want to roll one over.

I went to elementary/high school with them (Ndi Anambra); I know how to deal/relate with them. Good people, but one must equally be good or better to hang with them. I enjoy bantering with them. Thanks for Merchants of Light School, Oba. My formative years at this institution sharpened my skills on Anambra people.

Back to Arthur Eze who established Triax Airlines which was operated as ‘kai-kai’ bus; a bad airline business that I flew once – OMG!

Arthur chaired Orient Bank – Anambra state-owned bank. The bank was defunct as it operated because Arthur Eze used it as a piggy bank for petty cash operations.

Back on Peter Obi, you get the picture.

Obi, during Jonathan’s administration and through collaboration with Emeka Nwawka, a former Shell employee but then the MD of Orient Petroleum, falsely commissioned a refinery in Anambra. As of today, there is no functional refinery and no oil well in Anambra to justify a refinery. But Anambra people, known for “hi-5ing” on promise and fluff, chanted and cheered. Obi got away with that.

Peter Obi is different. His difference is within the acceptable standard deviation of a typical Anambra person – dance to your own music even if it’s all noise.

Did I say, Peter Obi? No, I didn’t. But you get the picture.

That resume (https://goo.gl/uNX8XY) is full of fluff. A good dog is a dog. There is no need to name it tiger.

Peter Obi read philosophy. He was an average student.  He established an “importer & exporter” business – NEXT Ltd.  And made money importing foods and beverages. His shops were in the market.

We need to have the correct picture.

With a pocket full of money, he came into politics. He ran on the back of Ojukwu and won Anambra governorship.  He performed better than many other governors. He is, therefore, eminently qualified to be president. That is the kernel.

Every other thing is fluff.

But he is a successful businessman and was a good governor. There was simply no need to concoct a superfluous resume.

He can’t claim to have graduated from Cambridge and Oxford and Harvard. And there was no need to include 3-day certificate courses taken in those universities in a serious CV.

Obi is good. He doesn’t need to be dressed in borrowed robes and false lashes. It’s unlikely he authored that resume. But since Gbenga Daniel peddled it, we must presume Obi approved it.

It was filled with chaff.

All you need to be on the boards of all the banks in Nigeria is money.  All those non-executive director positions mean nothing. A rich imbecile can be the chairman of a bank. He won’t learn anything there.

Obi is not lightweight. But that resume portrays a man who lacks sophistication, or who wants to beguile an impressionable public. We know he is humble. But humble people don’t pad resumes. Obi shouldn’t be seen competing with Dino who claims eight degrees from all the prestigious universities in the world.

I would have let it pass because Obi is a good man. But I have seen many people read that CV and leave their mouths agape. I had to help them make sense of the new wonder boy’s resume.

On the balance, Obi is good.