Ohanaeze Ndiigbo has left a destructive trail of blood, betrayal and sabotage of wider Igbo interest, to the extent that nobody in Nigeria has regard for the honor and dignity of a once proud race. Only those born with a deep sense of betrayal – the Lagos-Abuja domiciled traitors and fellow collaborators – will have respect for Ohanaeze as presently constituted. To date, we are yet to come across one person who can confidently point to one tangible achievement of Ohanaeze Ndiigbo that benefited the entire people. The truth is, there is none. They work for their pockets and the well-being of their children and relatives and nothing more.

Some of the sins of Ohanaeze Ndiigbo are too numerous, heinous and abominable to place in the public domain. But for our purposes, we shall present a historic and contemporary overview of a string of mind-blowing blunders and outstanding treachery by Ohanaeze Ndiigbo over the years, for the world to see and judge accordingly.

That IPOB was perversely tagged a terrorist group in the eyes of the laws of Nigeria, when Fulani terrorist herdsmen are free to roam and kill at will, is the exclusive making of Ohanaeze Ndiigbo and Southeast governors. Not many people are aware that Chief Nnia Nwodo and Gov. Dave Umahi personally pleaded with the Fulani Caliphate to invade the East because Nnamdi Kanu refused to call off the boycott of Anambra governorship election in November 2017. Ohanaeze Ndiigbo and Southeast governors consider IPOB a threat to their livelihood and were determined to accept countless cold-blooded executions of innocent IPOB members in order to prove to their Fulani masters they are good Nigerians.

Those in doubt as to the true motive behind the formation of Ohanaeze Ndiigbo by minders of the Sokoto Caliphate must bear in mind that Ohanaeze has fought and have continued to fight anybody with the interest of the masses of the East at heart. Ohanaeze, in keeping with the template drawn up by the Caliphate, once fought Dr. Azikiwe into irrelevance. They reduced him from Zik of Africa to mere Owelle of Onitsha, even when Zik realized the errors of his ways during the war and wanted to industrialize the East in the Second Republic.

This same Ohanaeze Ndiigbo repeatedly conspired against Ojukwu and crowned his humiliation by denying him a seat on Abacha’s Constituent Assembly. They corrupted Ralph Uwazuruike by pressuring him into accepting money in exchange for extinguishing the hope of Biafra. Today, he’s more interested in acquiring landed properties than pursuing the emancipation of Biafra.

Dr. Dozie Ikedife, it must be stated for record purposes, is a dedicated Arewa servant. He was Ohanaeze Ndiigbo President-General when Uwazuruike accepted money from the federal government to destroy the dreams of Biafra restoration. We must not forget that Uwazuruike was handed over to Dr. Ikedife to guide him out of his quest for Biafra. Today, Uwazuruike is another corrupt spent force hosting his Hausa/Fulani friends like Al Mustapha, Ango Abdullahi and Arewa Youths in his Owerri mansion on ways to build a better Nigeria.

The betrayal of Nnamdi Kanu and his family by Ohanaeze Ndiigbo is a well-established pattern by this group of saboteurs to kill any popularly accepted leader dedicated to setting the masses free. The interest of Ohanaeze Ndiigbo lies in destroying anybody or group that dares challenge the hegemony of their masters the Fulani-dominated Sokoto Caliphate. Nnamdi Kanu refused every mouth-watering offer to abandon Biafra agitation. He refused to succumb to their blackmail at Enugu Government House meeting with Southeast governors. When Nnamdi Kanu refused to accept money, oil wells and choice properties around the world in exchange for Biafra, he was marked for death.

They couldn’t destroy Nnamdi Kanu and IPOB on their own because they know he is too popular with the masses and they, Southeast governors alongside Ohanaeze Ndiigbo, lack the clout to move against him. Instead, they turned to their Caliphate masters to send in their battle group of the Nigerian Army to kill him in his home.

The IPOB Intelligence intercepted correspondence between Nnia Nwodo and Commander of 82 Army Division, Enugu pleading with him to launch a military attack against Nnamdi Kanu’s compound. Conversations between Gov. Dave Umahi and Lawal Daura, the former SSS (DSS) Director General, also confirm that all Southeast governors were in support of the assassination of Mazi Nnamdi Kanu.

Two leadership styles for the contemporary Igbo. The youth-driven IPOB agitates for self-determination as hope for brighter future while the elitist Ohanaeze Ndiigbo insist on preserving the status quo

In Gov. Okezie Ikpeazu’s press statements in the aftermath of the deadly invasion of Isiama Afaraukwu and massacre of IPOB family members, it will be observed that he justified the killing of Nnamdi Kanu by repeatedly saying that what happened to Kanu and his parents prevented the death of millions of Igbo people living in the North. He also alluded to this in his BBC Igbo interview on the matter.

The agenda of Ohanaeze Ndiigbo, from inception, is to stop the re-emergence of Biafra or the emancipation of the people of the East. Some older people will remember the antics of prominent Ohanaeze Ndiigbo chieftains like one Chief M. N. Ugochukwu of Ugo Foam & Ugo Motors fame, the Abilikete of Umunze in Old Aguata. He held series of Ohanaeze Ndiigbo meetings on behalf of Arewa Caliphate to dutifully subvert Igbo collective interests.

How about Eze Onuegwu Nwoke from Owerri, who will board Arthur Eze’s Triax Airline to see Abacha in Abuja to literally bow down before him as their god. The act of mortgaging Igbo interest at the altar of self-advancement is as old as Ohanaeze Ndiigbo, it didn’t start today.

There was another popular Ohanaeze Ndiigbo chieftain, Igwe Emeka Nnaji of Amagunze popularly known as Ankoto, a saboteur during the war. He was a prime mover and prominent member of Ohanaeze Ndiigbo. He boldly granted regular interviews to NTA, stating openly that Ohanaeze Ndiigbo is loyal to Sanni Abacha. A whole race loyal to one Arewa oppressor?

This same Ohanaeze Ndiigbo saw to it that Ojukwu was not elected to the Constituent Assembly because of their hatred for Biafra. They did not want the issue of Biafra or self-determination to be raised.

Ohanaeze Ndiigbo sabotaged Dr. Chuba Okadigbo out of Senate presidency. Anybody in doubt should ask Chief Joe Nwaorgu, the immediate-past Secretary of Ohanaeze.

Nnia Nwodo made Ndiigbo a laughing stock the day he knelt down in his bedroom in his Ukehe country home to plead with Bola Ahmed Tinubu to give him the ACN ticket to contest Enugu State gubernatorial election during the burial of his wife.

Historic crimes and injustices against Igbo-speaking people of Biafra were never addressed by Ohanaeze Ndiigbo. For instance, in 1939 some Anioma communities in present day Delta and Edo states were carved out of the core Igbo heartland despite protests from then Anioma kings to the British colonial authorities. Ohanaeze has done nothing ever since.

Parts of Ezza community of present Ebonyi state was carved into Benue State and instead of Dave Umahi and Ohanaeze Ndiigbo to fight for the reintegration of these people into the wider Igbo-speaking community, they chose instead to preside over an ever-shrinking Igbo land mass because they lack the courage, unlike Nnamdi Kanu, to confront the Sokoto Caliphate on these issues.

In 1976, oil-rich Obigbo LGA in Aba division of old Imo state was ceded to Rivers state. Obigbo is Ndoki clan and has over 50 oil wells, they are pure Igbo people separated from their Azummili kins by the Imo River. Ohanaeze did nothing to reverse this or fully integrate the people into the wider Igbo family.

Another criminal impotence of Ohanaeze Ndiigbo can be found in yet another Caliphate gerrymandering when Ohugbu, an oil-rich Ndoki community was ceded to Akwa Ibom state. Ohugbu is one of the highest onshore gas and oil producing areas.

Egbema community a core Igbo community was balkanized into three towns with the highest oil producing town ceded to River State from old Imo State. Today, we have the same Egbema people in Delta, Rivers and Imo, all answering Igbo names and speaking the Igbo language, but two are Southsouth and Niger Delta whereas the other is Southeast (Igbo). What an abomination! 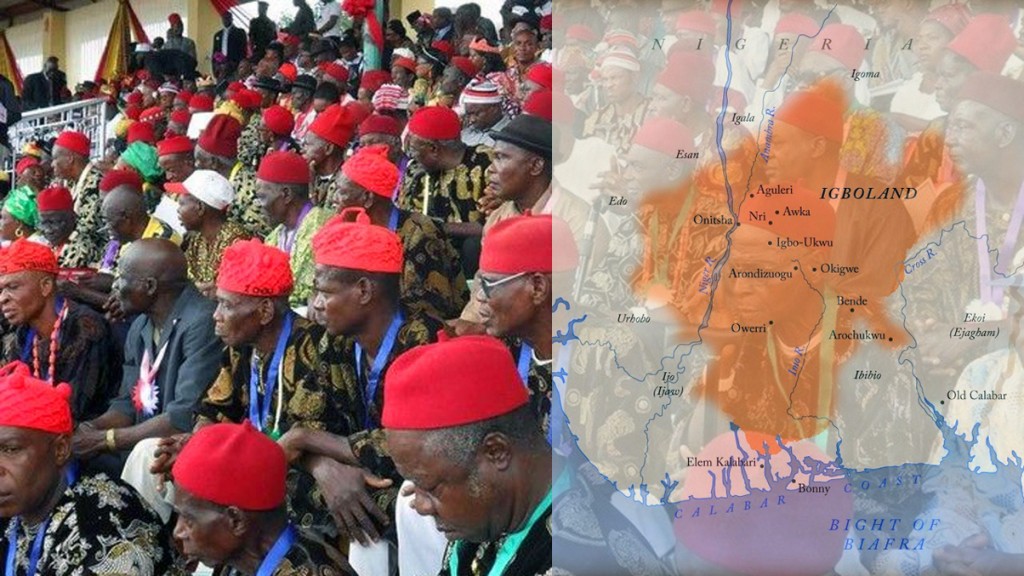 Nze na ozo society is quintessentially Igbo. Adult men with good character and visible means of livelihood get inducted into this society by established members in the community. The red cap emblematizes nobility.

Ndoni was carved out of Ahoada and given to Rivers state. Ndoni and Ogbaru are the same people. Ogbaru is in Anambra with some of their kinsmen in Delta State. The myth that Igbo people are landlocked is the making of Ohanaeze Ndiigbo under instructions from their Caliphate masters.

The envious Sokoto Caliphate government backed up by the ill-fated British concocted Willinks Report, acted contemptuously – aided and abated by Ohanaeze Ndiigbo – in other to gain control of the oilfields in Igbo towns and villages. They started sharing our oil wells to themselves hence, today, they have dominant control of our land and resources.

Ohanaeze Ndiigbo and PANDEF may be content with picking crumbs off the Fulani dinner table. But IPOB will never demean the God-given pride of the East nor condescend to such lows.

Under the treacherous watch of successive Ohanaeze Ndiigbo administrations, Alaigbo was restricted to five landlocked states when, in actual fact, Igboland started in Igbanke in Edo State and ends in the Atlantic Ocean. There is nobody from Opobo, Rivers State that doesn’t speak the Igbo language.

Ohanaeze Ndiigbo allowed the Arewa Caliphate propaganda to destroy the cultural affinity between Ndiigbo, Ibibio and Annang people of Akwa Ibom State who are blood relatives of Igbo people. Ekpe and Okonko, the two highest male fraternities in most parts of Igboland are actually Efik and Annang cultures. But today Cross River and Akwa Ibom are parts of the lugubriously named Southsouth with Edo state inclusive. There is no cultural, linguistic or social connection between the Efik and Bini peoples, for example. But we are deceived into thinking they are one people – different from the Igbo.