Ohanaeze Must Understand that Biafra Is Beyond Alaigbo – Says IPOB Leader

In All Matters Relating to Biafra, Ohanaeze Should Subsume Its Policies Under IPOB’s – Anthony Aniebue

Many knowledgeable pundits have often pondered about the nature and workings of the Biafra we demand if and when our prayers are answered. It is apparent that sheer clamor for what appeared to be an impossibility was the primary focus of pro-Biafra agitators only a few years ago. Today, Biafra is no longer perceived as an impossibility; in fact, Biafra is currently understood to be an inevitability. It has become very important that more clarity must be brought into the discourse of Biafra nationhood as an abstract so as to better sketch out the future which shall have what it takes to vindicate our legitimate aspirations. This interview of the Administrator of Customary Government of Indigenous Peoples of Biafra (CG-IPOB), Anthony Aniebue, by BVI Channel 1 broaches important matters of concern in streamlining the functionality of the Biafra nation we all aspire to actualize soon.

Biafra nationhood is revolutionary in outlook and thus must be seen to be distinct and different from the status quo structurally and operationally. CG-IPOB Administration eloquently makes a case about the proper place and role of the Ohanaeze Ndiigbo in ongoing agitation for self-determination in the Lower Niger territory of which Biafra is an integral part. The role that the Ohanaeze sees itself as playing within the context of Igbo self-determination and the emergent Biafran nationhood cannot be presumed; this is an object for public discourse as long as the apex Igbo organization seeks to engage in people’s affairs as it does today.

Should the Ohanaeze Ndiigbo see its future subsumed under the oversight of Biafranist ideologues? Or better still, who is the dog and who is the tail, protagonists of Biafra or Ohanaeze leadership elite? Ohanaeze is perceived to have closely collaborated with minders of the status quo for so long that it is hard for many to foresee a role for Ohanaeze, as presently structured and run, in determining strategic policy matters relating to Biafra nationhood. At best, Ohanaeze is the tail and thus is in no position to wag the dog. Does the incumbent Ohanaeze leadership echelon understand and accept this fact of life?

Zoning was Ohanaeze’s contribution to Nigeria’s political economy ostensibly devised to buttress the hope that one day, power at the center can get to shift to the perpetually marginalized constituents whose interests the sociocultural organization primarily represents. Rather than meet this expectation, what resulted from zoning are promotion of parochialism, mediocrity and poor accountability. Zoning has been used to foster and sustain the status quo for the past 50 years without anything tangible and visible to show for it. If zoning has a future, then the only two zones that make sense at “Nigeria” and Biafra zones. “Nigeria” zone has been at the helm of affairs in the past 50 years. It is now the turn for Biafra zone!

Anambra state is hotbed of Biafra political activism, in the interim, because of the off-season gubernatorial election scheduled for November 2017. Nnamdi Kanu of IPOB has repeatedly called for boycott of that election by pro-Biafra agitators and their supporters. Aniebue’s CG-IPOB does not support the boycott called for by the Kanu-led faction of IPOB. The CG-IPOB Administration, however, understands the underlying compelling reasons why the many failures of the status quo should not be given further subliminal approval by making the Anambra electorate to go through the charade of “electing” those who have historically misruled and misrepresented their interests in the past 50 years. 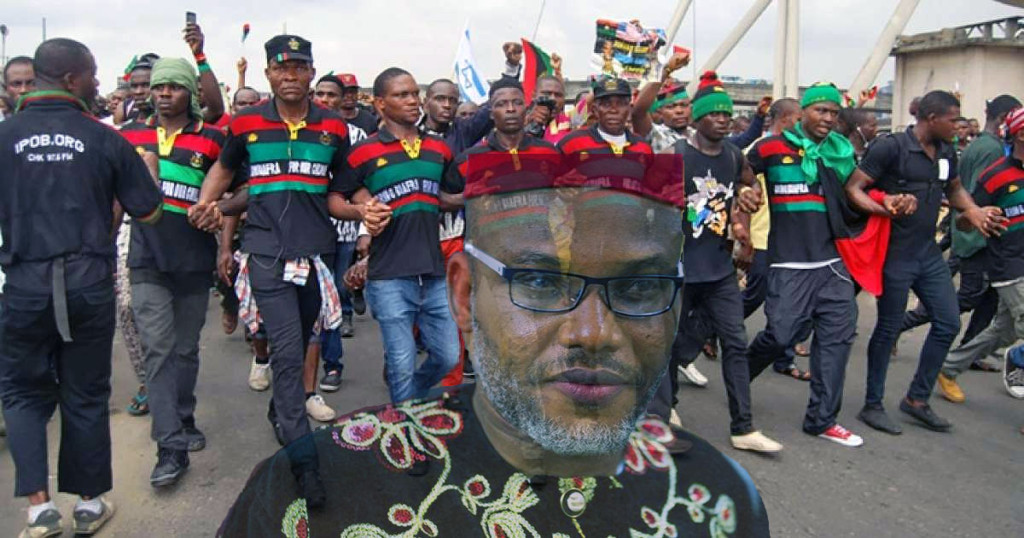 Ohanaeze’s purported public intervention in favor of Anambra North’s candidate for the November election, Gov. Obiano, was dismissed as divisive and uncalled for. The only zones understood by pro-self-determination groups to be in contention in Anambra and elsewhere throughout the Lower Niger (a. k. a. Greater Biafra) are the status quo and Biafra. The only group worthy enough to get support of Anambra grassroots electorate must be a candidate representing the Biafra zone, irrespective of whether the candidate emerges from the Northern, Central or Southern senatorial “zones” of the state. What matters more is the candidate’s appreciation of the true desires of Biafrans who are the overwhelming majority of the electorate in question.

Failure of the Political Class

The powerful selling point for those who advocate for boycott of the Anambra election is that the entire electoral process in Nigeria is a charade since only handpicked partisan candidates beholden to the status quo are declared winners by INEC, irrespective of how the voters actually voted at the polling booths. The political class overseeing Biafraland in the past half century has failed woefully in protecting lives of the indigenous peoples of Biafra, particularly in face of escalated extrajudicial killings of Biafrans by the combination of Nigeria’s security agents and privately funded and armed Fulani herdsmen militia. To make things worse, all that the political class in Biafraland has done in past 50 years was limited to collecting monthly allocations from Abuja and spending same as they deemed fit without accomplishing any sustainable development.

The call for boycott of Anambra election is being marketed to the youths, who constitute overwhelming majority of the electorate, as a symbolic repudiation of the status-quo political class and signal of the revolutionary tsunami that’s afoot.

The C-IPOB Administrator, Aniebue, contradicts himself when he enunciates the principles for bringing about a revolutionary Biafra on the one hand and on the other hand, he sees nothing wrong in supporting immersing pro-Biafra into the ongoing partisan political charade called elections “to go in and purge the political system”. It is confusing, to say the least, that he would conceive a scenario whereby channeling pro-Biafra agitation into “politics Nigeriana”, which has repeatedly failed the people, should be tolerated by dyed-in-the-wool Biafranist ideologues.

CG-IPOB leadership perceives emergent Biafra territorial space to encompass nearly 20 ethnic nationalities of which Alaigbo is only a part; this concept dovetails seamlessly with stance of the Lower Niger Movement (LNM) being spearheaded by the Lower Niger Congress (LNC).

Aniebue’s stance blanket opposition to distancing the pro-self-determination quest of our peoples from status-quo politicking as an operational stratagem in wrong-headed for obvious reasons. While the LNM has not called for a boycott of the imminent Anambra governorship election scheduled for November, the movement is dead against the conduct of any polling, whatsoever, in the 2019 general elections cycle throughout the Lower Niger, of which civil-war Biafra is part and parcel.