If one were to take the statement from the PDP National Publicity Secretary on its face value, the former ruling party of Nigeria for most of the 4th Republic saw it fit to come forth with a press statement ONLY because of its alarm over former President Obasanjo’s claim that there is plot by the incumbent APC government to arrest and detain him indefinitely. Many Nigerians have, otherwise, been wondering what had become of the once largest political party in Africa while Nigeria, over which the party has ruled for 16 years, is careening relentlessly toward the edge of the precipice in the past few years. For all practical purposes, the PDP was presumed dead after it was gutted and deposed during the 2015 general election cycle that swept the neophyte opposition alliance, APC, into power.

Those who had expected the PDP to function as the new opposition leader to the incumbent APC government were terribly disappointed for the following reasons:

The PDP comes across as a party that has either lost its will or has been deep in slumber after it lost its grasp on the reins of power 1n 2015. It is hard to ascertain whether the statement emanating from Kola Ologbondiyan is indeed coming from the PDP leadership or not. But even if the PDP stands behind the pronouncement, it is very interesting that the former ruling party has been aroused from its state of anomie just to fight on behalf of the very individual who orchestrated the party’s fall from grace just three years ago.

Obasanjo was practically the founding executive leader of the PDP. This same Obasanjo’s words and actions caused the catastrophic collapse of the once powerful party in the run-p to the 2015 general elections cycle. Olusegun Obasanjo openly campaigned against the PDP presidential candidate in the 2015 polls, President Goodluck Jonathan and worked overtime to garner electoral support for the APC flag bearer to the total dismay of his fellow PDP partisans. What, in the world, can be the rationale for PDP’s current resolve to rise up to fight for the very person who crafted the party’s downfall? Why has it now become the PDP’s business to shield Obasanjo from the APC and the Buhari government which he campaigned to put into power only 3 years ago? 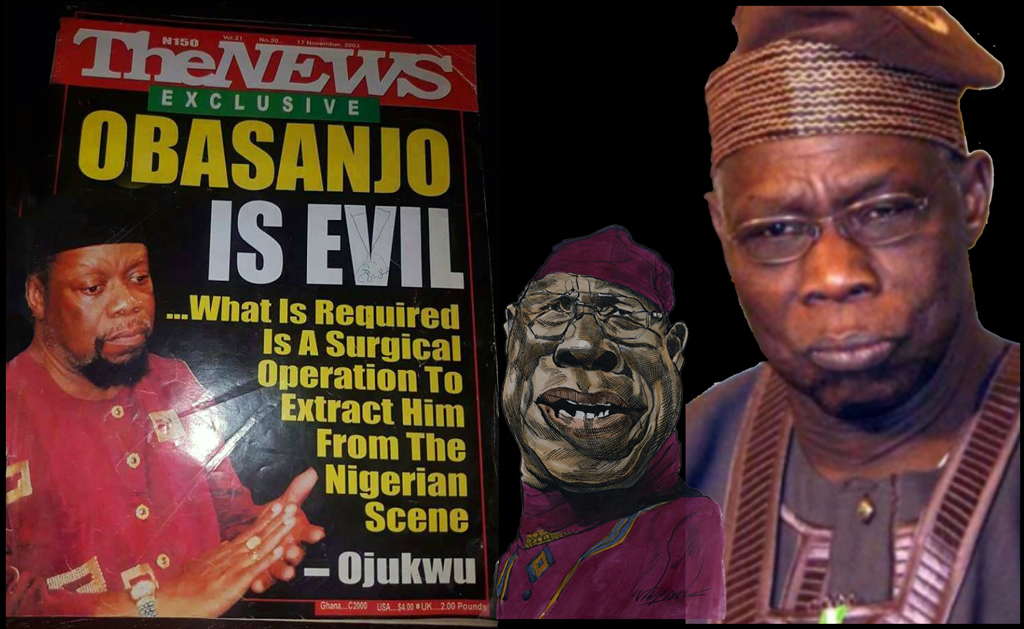 Civil war Biafran leader, General Ojukwu, was in a strong vantage position to understand the man , Obasanjo and the motivating force that underlie the latter’s incessant schemes to drive Nigeria’s geopolitical economy to favor the Arewa North.

Certainly, the most offensive aspect of the PDP’s so-called press release is the total absence of shame. What right does the PDP think that it has to cajole Nigerians to note the “persecution, intimidation, harassment and framing of our (PDP) members” at the expense of citizens’ own very survival which the former ruling party never cared to even think about since it was replaced at the seat of power by its alter ego? Perhaps, the “Nigerians” being beckoned upon by the PDP include the millions of enslaved indigenous peoples of the Lower Niger, survivors “Python Dance II” or the walking dead being ethnically cleansed by the vicious murderous attacks of the heartless but well-armed Fulani herdsmen militia. The idiotic press release comes across as very insensitive to the quandary confronting the average citizen who the PDP had let down in the past when the former ruling party was in power and now, when it is supposed to function as the official opposition to the ruling APC.

PDP & APC are Birds of a Feather

The mess which the Nigerian political class has wrought on the polity is now biting the asses of the greatest swindlers in the gang. Obasanjo was literally the founder and mafia boss of the PDP since the party’s inception until the wily Otta farmer elected, without consulting anyone, to divert his energy and goodwill into empowering the nascent All Progressives Congress (APC). In plain language, Obasanjo was key in bringing the curse of Buhari presidency on his fellow compatriots. If his preferred electoral candidate has failed to perform as Obasanjo himself vouched during the preceding campaign, the right thing for him to do would have been to come clean and openly apologize to the highly disappointed electorate. Instead of doing the logical thing, the former president chose to write a letter suggesting that he is now poised to float yet another candidate and partisan formation to lead Nigerians out of the present cesspool he contributed in creating. And this crafty man expects the dumb Nigerian electorate to hearken unto him, once more?

PDP and its alter ego, the APC, have both failed Nigerians because both of these parties are predicated on sanctimonious unitary Nigeria ruled and micromanaged from the Aso Rock Villa. The noise being made by the PDP would make some to suggest that the former ruling party may indeed be dreaming of coming back into the power by kicking President Buhari and the APC out of the saddle during the INEC-scheduled 2019 general elections. What an affront! 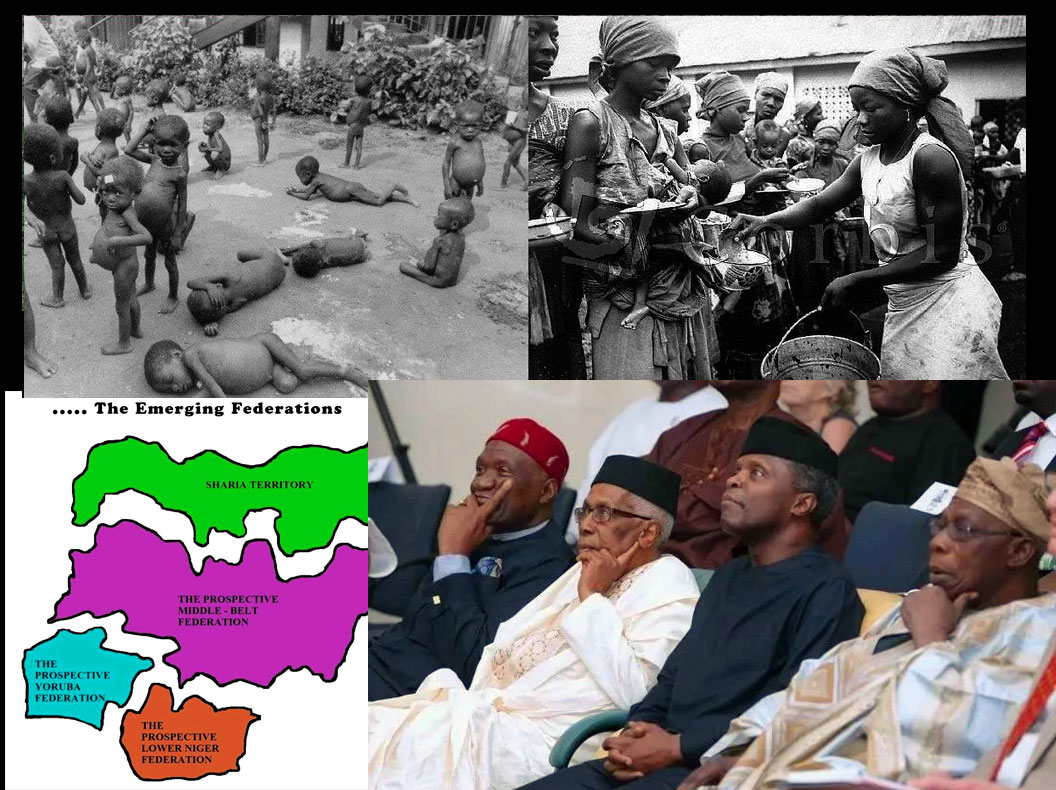 “Acting” president of Nigeria, Yemi Osinbajo, Obasanjo & others face up to Nigeria’s past woes and the resultant future prospect.

Maybe the PDP spokesperson should first answer the following posers for the bewildered Nigerian electorate upfront:

Unless the above posers are addressed with clarity and sincerity, the PDP should save us their tears being shed for Obasanjo’s self-imposed dilemma and personal anguish. The PDP is making a serious mistake by its new romance with Obasanjo whose political currency is no longer worth much in contemporary Nigeria.

By the Editorial Team

The Peoples Democratic Party (PDP) is alarmed by the revelation of former President Olusegun Obasanjo that the All Progressives Congress (APC)-led Federal Government is plotting to arrest him on trumped up charges and detain him indefinitely.

PDP says the revelation coming from a Nigerian of Chief Obasanjo status is terrifying as it has heightened the tension in the polity and confirmed our fears that our dear nation has descended into a police state where any Nigerian, who holds a divergent view to President Muhammadu Buhari 2019 re-election bid, becomes endangered.

The alarm by Chief Obasanjo has further shown that the PDP has not been crying wolf regarding the plots by the APC Federal Government to frame, arrest, detain and arraign political opponents of the APC, including regular Nigerians, for holding or canvasing opinions that are divergent to the interest of those in power. 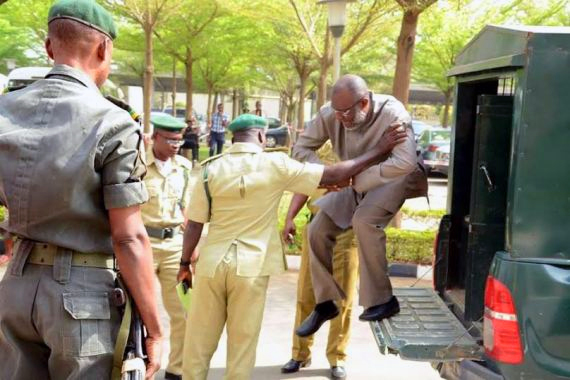 We invite Nigerians to note the travails faced by perceived opponents of Buhari Presidency, including Senate President Bukola Saraki, Deputy Senate President Ike Ekweremadu, Senators Shehu Sani and Dino Melaye, who had raised similar alarms in the past.

The PDP urges Nigerians to note how APC controlled security forces, on Wednesday, arrested and detained opposition members in Ogun state, including a member of the House of Assembly, Hon Adebiyi Adeleye, who were going about their legitimate activities, only to tag them as cultists.

The PDP condemns APC’s resort to persecution, intimidation, harassment and framing of our members, as well as dissenting voices, just to suppress the opposition ahead of the 2019 election.

PDP wants the APC and Buhari Presidency to note that no amount of coercion, intimidation and illegal arrests will alter the determination of Nigerians to vote out the dysfunctional APC and rescue our nation from the shackles of the Buhari Presidency and its misrule, come 2019.