As an Anglican/Methodist/Catholic by birth, I lived my life without fear of any evil forces even though they existed then and now. We were never exposed to how wicked devil and his demons were. We exude so much confidence even though we knew little about the Lord believing that Satan cannot do anything to us. All we were taught was to pray and do what is right. Emphasis was not laid on how vicious Satan and demons are, and we were not afraid.

Morals, values and merit were taught and emphasized to us. Even when things were not working as it should, we only pray and look inward as to where we were not doing it right and make amends as necessary. We lived among the witches and wizards, the ogbonis, the babalawos, the principalities and powers, yet the glory of God radiated, and His powers covered us. Acts of wickedness and immorality were at their low ebb. We were free and happy with everyone and value everyone. It was not a common thing to suspect anyone as being behind your predicament.

We always do self-searching first when things are not moving in the right direction. Pointing accusing fingers were not the order of the day as it is now. In a nutshell, Satan and demons were not glorified.

But the advent of Pentecostals changed everything. They teach and preach the scripture with heavy doses of fear for the devil and his agents. They made us see our neighbors as enemies; our parents no longer love us as we keep suspecting them for whatever that is wrong with us. Everything now is about demons, witchcraft, Satan, principalities and powers. Then, we lost the love that used to bind us together. Everyone is now a suspect. We no longer look inward and do self-searching when things are wrong. We lost our values; hard work and merit were relegated, and miracles took the forefront.

Our new songs centered around uncommon favor, blessing, prosperity, healing, miracle money. Our prayers are now focused on destroying the foundational and hereditary powers, inherited curses, deliverance etc. and our pastors became masters of the fear factor. Yes, they teach and preach holiness, righteousness, sanctification, brokenness and prosperity, but all were garnished with heavy doses of fear. Not the fear of God but Satan. We were made to see them as only who possess the power to defeat Satan and demons for us because they were anointed. Then the anointed must be referenced and feared. He is the authority and cannot be questioned or queried for his flagrant abuses because God will be angry. Just obey. We became demented, and they have to think for us.

If you fail to attend one of the church activities, Satan will kill you, and God will be mad with you. We started abandoning our legitimate work for church services, and our nation’s economy started nosediving because of our attitude to diligence. Our factories are now being shut for churches to spring up and we are jubilating that Jesus is taking over our nations. We started looking for money at all cost to impress our pastors that we are cheerful givers. 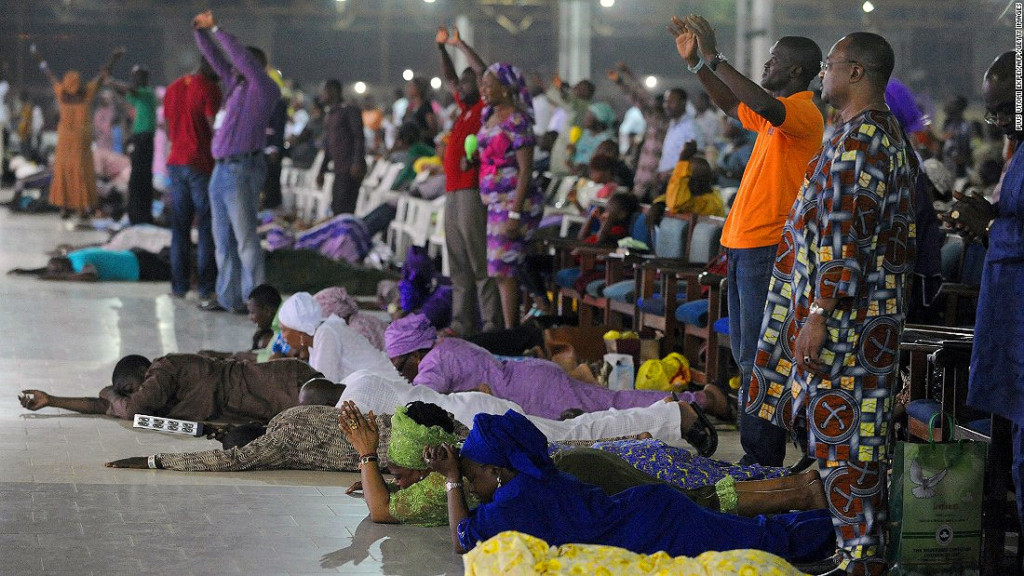 The scene at typical Pentecostal church in Nigeria with thousands of congregants who routinely throng the arena with their tithes and of course, great anticipation for miraculous cure or access to wealth.

The Anglican/Methodist clergy receives salary and remunerations as determined by the constituted authority. But the GOs, Pastors and  Apostles live large while the tithers scramble for existence. They are supposed to be so blessed because they are anointed talk to God on our behalf, and the anointed can ride in Jets and Limo, but the unanointed must remain in perpetual penury even though the anointed feeds on them. We never had this much killings and rituals killings in the past. Our public officers were accountable to us, feared God and respected the rule of law.

The agitation for uncommon favor and unmerited blessings today is unrivaled. We are now in the dispensation of perverted grace and miraculous gratification, reaping where you have not sown because God is Father Christmas. We have lost our values.

Our pastors are now consultants for politicians by helping them to win elections. Pastors now rain curses on the altars upon anyone who questions their anointing. Pastors now wrest the scriptures to suit their ego and desperation for worldliness. Holy Spirit is their exclusive right, and whatever she tells them we must swallow hook, line and sinker. Only they can read the bible, understand and interpret it. Any other interpretation is canal and inspired by Satan to fight the body of Christ.