Since Burial of 73 Benue Indigenes Murdered in January, Another 26 Persons Have Been Killed in Okpokwu LGA Recently by Fulani Herdsmen Militia – Gov. Ortom

Governor Samuel Ortom on Monday welcomed President Muhammadu Buhari to Benue State for the first time since assuming power in 2015.

Ortom in a thought-provoking speech told the president that his people were tired of burying dead bodies, pleading that he should find a lasting panacea to the menace.

His full speech below:

On behalf of the Government and good people of Benue State, I welcome the President of the Federal Republic of Nigeria, President Muhammadu Buhari to Benue State, the Food Basket of the Nation. As a helpless child in trouble looks forward to the rescue by a father, so the people of Benue looked forward to seeing you. Welcome, sir. Benue people have always believed in you which is why we voted massively for you in the 2015 general elections.

You are our father and we appreciate your visit here in the hope that our lingering challenges will be over. You are known as a man of integrity and uprightness and you have always fought for justice.

Your Excellency, on January 11, 2018, we buried 73 citizens, including women and children. All of them were brutally slaughtered in their sleep by armed herdsmen in the early hours of the New Year 2018. At least 65 more have been killed in Guma and Logo Local Government Areas after the mass burial. Just a few days ago, 26 of our men, women and children in Okpokwu Local Government Area were killed. Also, over 5,000 people were displaced in Mbatoho Community in Makurdi Local Government Area. Attacks by armed herdsmen have continued in various communities in the State leading to the displacement of over 170,000 people. More than 60 percent of this figure are children who have been forced out of school. These and many others now live in the eight Internally Displaced People’s (IDPs) Camps scattered across the State namely: Abagana, Daudu1 and 2, Gbajimba, Tse Ginde, Anyiin, Abeda and Ugba. Their homes and farms have also been destroyed and taken over by armed herdsmen. 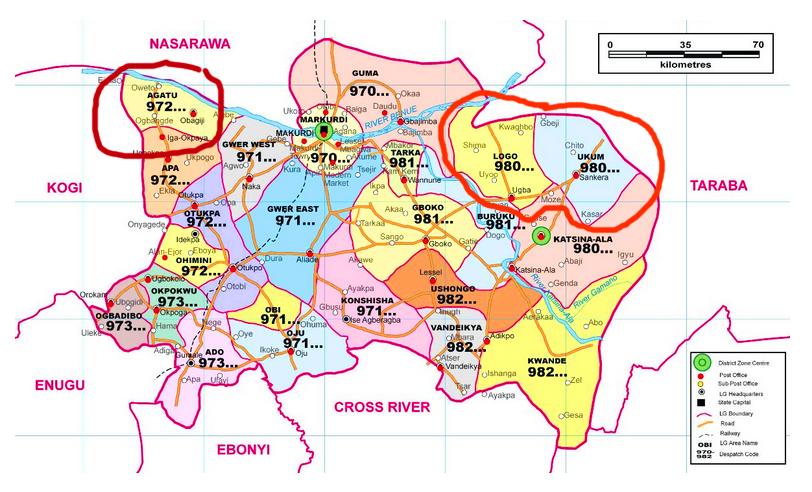 Map of Benue state showing sites of past Fulani herdsmen militia murderous attacks in Ukuum and Logo LGAs where mass killings occurred. Mayhem had been perpetrated in Agatu LGA in northwestern end of the same state.

Mr. President, thank you for your response to these attacks. You quickly directed the Inspector General of Police to relocate to Benue and stop the killings. Issues of capacity and integrity may have accounted for the disobedience of your orders, but you responded swiftly. At your directives, the National Emergency Management Agency (NEMA) also distributed some relief materials to the IDP Camps. Given the enormity of the situation, this was like a drop in the ocean. Thank you for the deployment of the Police Special Forces which proved useful in reducing the attacks. Some of the gallant Police and Civil Defence Officers paid the supreme price in trying to keep the peace. Our sympathies go to their families and loved ones.

Your Excellency, we plead with you to take steps to reduce the suffering of the over 170,000 of our countrymen in the eight Internally Displaced Camps. The Federal Government should compensate them and assist in the rebuilding of their homes, as promised by the Committee on Displaced People, headed by the Vice President. The Primary and Secondary Schools, Churches and Health Centers destroyed in several communities should be rebuilt for use again.

When I was sworn in May 2015, one of the first things our administration did was to organize an amnesty programme for youths who had armed themselves and were creating some security challenges in the State. The amnesty was done in the open and over 700 weapons and thousands of ammunition were returned. The Presidential Committee on Small Arms and Light Weapons and the United Nations contracted the Mines Advisory Group (MAG) of South Africa to supervise the destruction of weapons and ammunitions surrendered by the over 900 persons under the programme. The amnesty programme was our own way of telling everyone that we cannot condone lawlessness in the State. We set out to reform our youths and stabilize our rural areas as we promote agriculture. Our conviction is that the formation of militia does not bring peace. It only promotes lawlessness, impunity and instability. We have also eliminated thuggery in our government. The challenge we have, however, is about Terwase Akwaza, alias Ghana, the notorious gang leader who has been terrorizing Benue and Taraba States. He has been declared wanted and a bounty of N50 million has been placed for information on him. We hope that Exercise Ayem Akpatuma or its upgraded version will help us arrest and bring him to justice. Indeed, we request that the exercise be upgraded to an operation with the capacity to chase away the invaders so that those who have been displaced can return to their homes.

Although concerted attacks on communities in the state commenced in 2011, between 2013-2017, forty-seven attacks were recorded and over 1,878 men, women and children were slaughtered in cold blood across 14 Local Government Areas of the state. Another 750 were seriously wounded while 200 were missing. Over 99,427 households were affected. We have lost an average of 47% of Internally Generated Revenues (IGR) due to attacks by armed herdsmen in the state. This underscores the problem between herdsmen and farmers. It was clear to us that increased population, shrinking arable land, global warming and desertification as well as the need to diversify the economy through farming, all make open grazing unattractive.

Through consultations and research, we discovered that the global best practice for animal husbandry is ranching. Top countries in the global cattle business such as India, Brazil, USA, South Africa; Kenya and Zimbabwe, are known to practice ranching. It takes proper care of livestock to ensure quality meat and dairy products and minimizes cattle rustling. Your Excellency, this is the logic behind our popular state law, “Open Grazing Prohibition and Ranches Establishment Law, 2017”. I urge anyone who has a superior method other than ranching to bring it to the table. The law duly passed by the Benue State House of Assembly and enacted by me reflects the wishes of the Benue people.

On 30th May 2017, the Miyetti Allah Kautal Hore, in a ‘World Press Conference’ held in Abuja, opposed the Ranching Law. They called on Fulani herders in all of West Africa to come into Benue to help them reclaim their land. In the same vein, Miyetti Allah Cattle Herders Association in their Press Conference declared that more blood will flow in Benue if the Ranching Law is not rescinded. Your Excellency, as a President that supports the rule of law, you will most certainly be offended by these hate speeches that may have crossed the red line.

Your Excellency, how can a group claim responsibility for the killings that happened and are going about scot free? How can a group make public these inciting and criminal declarations in an organized society and are not arrested by the Police? Your Excellency, kindly order the immediate arrest and prosecution of the leadership of Miyetti Allah Kautal Hore and Miyetti Cattle Breeders Association for carrying out their threats to attack Benue on account of the Open Grazing Prohibition and Ranches Establishment Law, 2017.

Recent security reports before Your Excellency indicate that the Islamic State in West Africa (ISWA) are accomplices in the massacres in Benue state. If these reports on Benue and other parts of the country are true, they have enormous implications for national security. There may be a need to strengthen the enforcement of the ECOWAS Protocol by directing the Nigeria Immigration Service to do the needful.

Your Excellency, distinguished Ladies and Gentlemen, this is not good time to tell you about our spectacular achievements in the area of education where over 711 Schools have been renovated and 16,000 teachers retrained. We need not recount strides in the health sector where the moribund Schools of Nursing and Midwifery as well as College of Health Technology Agasha, earlier closed down, have been renovated, accredited and reopened. After 12 years, instead of the normal 6 years in Medical School, we graduated 152 students of the Benue State University Medical School. We wish to appreciate the partnership between Federal Government and our state in the area of Sustainable Development Goals as well as Universal Basic Education. We have empowered youth and women through effective collaboration with Central Bank of Nigeria and Bank of Industry. We have massive rural development in terms of rural roads, rural electrifications, bridges and Skills Acquisition Centers. We have also completed various projects in the areas of water and sanitation.

Your Excellency, to reduce the burden of the state government, we ask you to take over the running of some institutions in Benue State. We plead that the Federal Government takes over Benue State University Teaching Hospital. Benue state is the only state that does not have a Federal College of Education and Federal Polytechnic. We request the take-over of the College of Education, Katsina-Ala and Benue State Polytechnic Ugbokolo by the Federal Government.

We also plead with you to direct the rehabilitation and dualization of Makurdi – Otukpo – Enugu Road as well as Makurdi – Gboko – Katsina-Ala Road and Gboko – Vandeikya – Obudu Road which are in a terrible state of disrepair. The Makurdi – Agasha – Wukari Road will ease our communication with Taraba and Plateau States and a bridge at Buruku on River Katsina-Ala will link other parts of the state and Taraba. These have a large population of the state that is engaged in farming which has turned Benue into the Food Basket of the Nation.

The people of Benue identify with the reconciliation efforts by Senator Ahmed Tinubu who is carrying out your mandate. The Benue people also appreciate Mr. President for the appointments made from the state, we still hope that more appointments will be made so as to cement the relationship between Mr. President, the party and the state.

The issue of backlog of salaries remains intractable. Part of the problem of Salaries was inherited from the past government. In spite of your efforts with Bailout Funds and Paris Club Refunds which we appreciate, the challenge still remains due to the high wage bill in the average of N7.8billion which we inherited. We request for a grant or soft loan to be able to pay the arrears even as we have taken steps to stabilize regular salary payment with effect from January this year.

Open-grazing cattle-rearing practice has been abandoned worldwide in preference for ranching. Benue state government has already debated, passed and enacted a legislation banning open-grazing in the state. MACBAN-sponsored massacres are supposedly intended to be a show of resistance against enforcement of the state law.

Your Excellency, let me conclude by calling on the Federal Government and states to support and promote the Ranching Law so that, together, we will stamp out the menace of herdsmen and farmers attacks and cattle rustling in Nigeria. There is no known better and credible alternative to ranching.

Once again, welcome to Benue State.