Rebecca Sharibu, Leah’s Mother, Goes to US Capitol Hill to Plead for Immediate Release of Her Daughter Enslaved by Boko Haram Captors

by our Staff Reporter

Addressing a Nigerian delegation visiting official Washington to plead with the US government to assist in arresting the mass killings of their Christian kinsfolk by the jihadists raiding and pillaging Middle Belt Nigeria, former US Congressman Frank Wolf of Northern Virginia said that, based on all he knows thus far, he has come to the conclusion that the mass murders and ethnic cleansing by Boko Haram, Fulani herdsmen militia and Islamist bandits constitute a GENOCIDE. The Nigerian delegation was at the American Heritage Foundation headquarters after making an appearance before the International Religious Freedom Caucus session with Ambassador-at-large for International Religious Freedom, Sam Brownback, at Dirksen Senate Office Building at the Capitol Hill, Washington, DC on Tuesday, 11th April 2019.

Dede Laugesen of Save the Persecuted Christians and Stephen Enada of International Community on Nigeria (ICON) guided the members of the delegation from Nigeria through their presentations at the Dirksen Building roundtable and at some US Senators’ offices in the Capitol Building complex. Mrs. Rebecca Sharibu tearfully pleaded for the immediate release of her kidnapped teenage daughter, Leah Sharibu, who is being held by the Boko Haram terrorist group as a slave after she refused to renounce her Christian faith. Also in this delegation are daughters of the assassinated ruler of Adara Community in Christian Southern Kaduna whose chiefdom was arbitrarily converted into an Islamic emirate by the Muslim Kaduna state governor, Nasir el-Rufai. Also in the delegation is a survivor of the mass killings in Agatu Local Government Area of Benue state, Mr. Napoleon Adamu. It is a well-known fact that the Muslim state governors and the Buhari presidency operate in collusion with the Islamist jihadists who are perpetrating the genocidal massacres and ethnic cleansing of Middle Belt Christians.

Many may be unaware of the enormous effort being made by the US Christian Church leaders to come to the rescue of their fellow Christians in Nigeria, especially in the Middle Belt region, who are being subjected to ethnic cleansing and genocide by the Islamist jihadists fighting as Boko Haram insurgents, Fulani herdsmen militia and Almajiri armed bandits. The Christian broadcast outlets are the only news platform that have bothered to give publicity to the mayhem being unleashed by well-organized AK47-wielding terrorists on innocent Christian indigenous inhabitants of the Middle Belt since it became clear that leading global news networks like the CNN, BBC and others have opted to ignore the unfolding genocide in the West African sub-region. The Nigerian head of state, President Muhammadu Buhari, a Fulani and Islamist ideologue, is being widely blamed for colluding with the terrorist groups which are carrying out the dual agenda of Fulanization and Islamization of Unitary Nigeria through the barrel of the gun. General Theophilus Y. Danjuma, a Christian from the Middle Belt, has openly charged the Buhari administration’s security apparatchiks of working in collusion with the jihadists because no single culprit has been arrested even though thousands of Christians have been killed or rendered destitute refugees in their ancestral lands throughout the Middle Belt Nigeria.

The senators, members of Congress and their legislative staff who heard the horrific tales of the terror and savagery being unleashed on the indigenous Christian population of Middle Belt Nigeria by well-organized AK47-wielding jihadists, openly empathized with the visiting delegation. Mr. Frank Gaffney of the Center for Security Policy remarked at the caucus’ roundtable with Ambassador Brownback that a significant security challenge to the US strategic interests is brewing in the West Africa sub-region which must be stopped now before the situation explodes beyond control. At the same event, the first female Christian elected as Mayor of an Iraqi town addressed the caucus. She shared an alarming message regarding the rapid elimination of Christians in Iraq. Before the removal of Saddam Hussein by the coalition forces, there were 1.3 million Christians in Iraq. Today, the number has reduced to about 100,000. The decimation of Christians is being fueled by the combined repression and killings by both the Shii radicals from neighboring Iran and Sunni jihadists operating independently or as a part of ISIS.

Participating at the Dirksen Senate Office Building caucus event was a contingent led by the Lagos-based Secretary-General of the Lower Niger Congress (LNC), Mr. Tony Nnadi. The LNC is the arrowhead of the self-determination quest of the indigenous peoples of the Lower Niger, in particular, and non-Shariarest of Nigeria. The self-determination group perceives the ultimate solution to the ills that have combined to paralyze Unitary Nigeria to be embedded in the 1999 Constitution which is an imposition by the last military junta to ruled over the country before the return of civilian democracy after decades of repressive dictatorships.

The 1999 Constitution, on which the country’s faltering democracy is based, has no constituents’ input, whatsoever, via a constitutional convention or referendum. What goes for 1999 Constitution being used today to run today’s Unitary Nigeria is same as Decree No 24 of 1999 which was written and signed into law by the last military ruler, General Abdulsalami Abubakar, who is a well-known Fulani irredentist. The LNC has successfully made the case and persuaded many Nigerian constituents that the imposed illegitimate and fraudulent 1999 Constitution empowers the Fulani hegemons of the Sokoto Islamic Caliphate to be able to confiscate the lands belonging to indigenous peoples as well as the wealth amassed from the plunder of vast crude petroleum deposits of the Lower Niger. With this leverage, the Islamist regime in Abuja headed by Muhammadu Buhari can arm paramilitary terrorist groups and bribe politicians to collude in effectuating the genocide and ethnic cleansing of Christians with an aim to attaining a full Fulanization and Islamization of Nigeria’s geopolitical space. 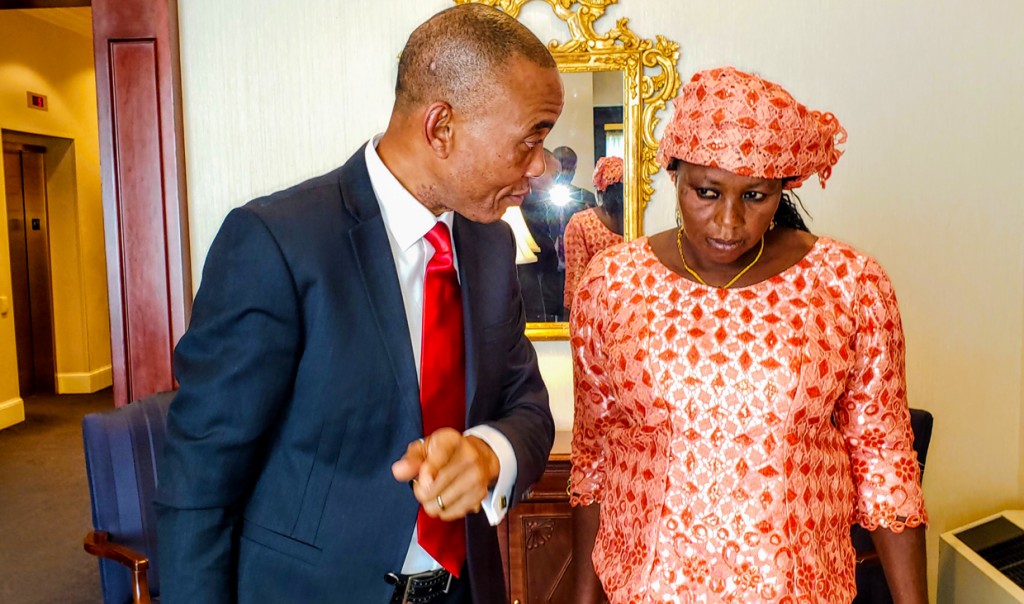 Mr. Tony Nnadi, Secretory-General of the LNC (left),  a lawyer, explains to Mrs. Rebecca Sharibu from Yobe state, Nigeria the ways and means to guarantee that the kidnappers of the latter’s daughter must be brought to justice sooner than later.

The LNC observed that the major constituent blocks in Nigeria’s Southeast, Southsosuth, Southwest and Middle Belt geopolitical zones had built a functional alliance to oppose the status quo which is being sustained by an imposed fraudulent 1999 Constitution. Only the 12 states of the Arewa North that have already adopted the Sharia legal system are not part of this new national coalition to repudiate the 1999 Constitution. The alliance, which aspires to see a secular and democratic Nigeria, rallied to demand an immediate geopolitical restructuring of the country. In the 2019 general elections campaign, the leading opposition party, PDP, promised immediate restructuring while the incumbent APC was against any form of change in the status quo. Contrary to the Independent National Electoral Commission (INEC) choice to declare the APC victorious, Nigerian stakeholders across the board know that the opposition PDP and its presidential candidate, Atiku Abubakar, got the electorate’s majority votes at the just-concluded polls. Till date, INEC’s perceived rigging of the elections in favor of President Buhari is still being contested by Atiku Abubakar and the opposition, PDP, at the Electoral Tribunal.

The surest and quickest means to stop the ongoing genocide and ethnic cleansing of Christians in today’s Unitary Nigeria is to proceed with the geopolitical restructuring of Nigeria by first writing a brand-new constitution that shall guarantee a FEDERAL and SECULAR Nigeria. Failing this, the country must then be dissolved to allow the constituents entities to regain their God-given rights to their own ancestral lands.