A Note to Peacemakers Who Despise the Truth: Ndiigbo Reject Blackmail, Propaganda and Idiocy of Some New “Savior” & “Supreme Leader”

In response to numerous inquiries by people of goodwill as to why the LNC turned down the “Peacemaking and Reconciliation” efforts of Nzuko Umunna, especially to the report on that effort dated July 5, 2020 and titled: “Resolutions reached at the Meeting Between Mazi Nnamdi Kanu and Some Igbo Stakeholders Being Facilitated by Nzuko Umunna at the Peace and Reconciliation Meeting on July 5, 2020”, Tony Nnadi of the LNC wrote as follows:

At a time the incorrigible chief-merchant of the rogue global “Biafra” franchise who ordered that Chief Nnia Nwodo be stoned to death by his hoodwinked foot soldiers had just renewed the death threat by giving the Ohanaeze PG two months’ period of grace to repent, or the death sentence would be reinstated, this report is coming from the same Nzuko Umunna people who tried to set up a “Reconciliation Meeting” between myself (Tony Nnadi) and Nnamdi Kanu three weeks ago, (i.e., about mid-June 2020).

Let me inform us that I turned down the meeting by demanding the following as preconditions for any meeting:

(2) That the peacemakers get Nnamdi Kanu to first reconcile himself with Dr. Clifford Iroanya, who was the chief-witness of what transpired between myself and Nnamdi Kanu and so must accompany Nnamdi Kanu to any meeting I will attend in connection with the self-determination quest of our people.

(3) That the peace/unity meeting will have to wait until the USCIRF 2020 Report, which expressly named IPOB as an entity tormenting the Church and Christians in Nigeria, is revised and IPOB is removed. Otherwise, the LNC, which is currently working with US Institutions on ways of remediating the grave infractions (including ethno-religious killings) against International Religious Freedom by Nigeria and entities within Nigeria (Boko Haram, Fulani Herdsmen and ISWAP), will be laying itself open for entanglement with an IPOB that has been listed along with these other offending entities, especially Boko Haram,  by the United States Commission for International Religious Freedom (USCIRF) in its 2020 Report.

I am afraid that new preconditions have now arisen that would include unconditional written apologies to Chief Nnia Nwodo and Senator Ike Ekweremadu.

It would be recalled that Nzuko Umunna initiated the February 28, 2017 delegation to Kuje Prison where a meeting-within-meeting took place between myself and Nnamdi Kanu (midwifed by Dr. Clifford Iroanya), to revisit the 8-Point Strategy of the LNC which Nnamdi Kanu had rejected completely in our 2013 meeting, including particularly, the Referendum route to self-determination as against the Nnamdi Kanu/IPOB cataclysm option which the LNC completely rejected from the onset.

In that February 28, 2017 meeting, Nnamdi Kanu, for the first time amongst other things, expressly and unequivocally committed before the Nzuko Ummuna delegation, to the Referendum route as proposed by the LNC and this offered a basis for some kind of reconciliation of strategy and methodology between the LNC and other “Biafra” agitation groups, including the IPOB, as well as an opportunity for the commencement of integration of efforts between the LNC and the “Biafra” agitation groups. 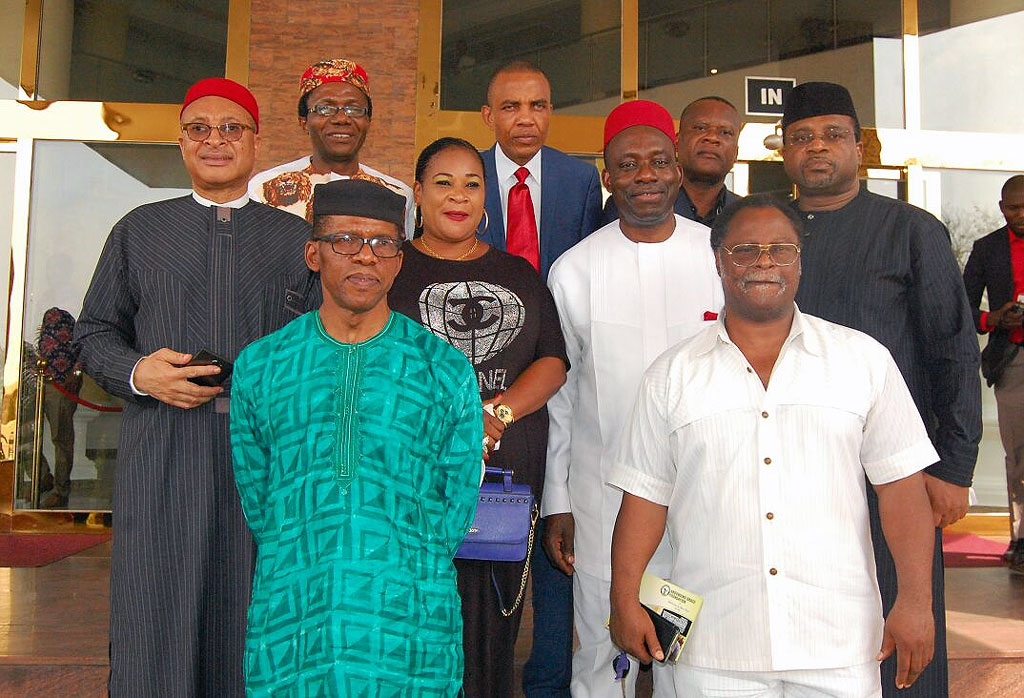 Nzuko Umunna delegation that visited with Nnamdi Kanu at the Kuje Prison, Abuja, on February 28, 2017. LNC Secretary-General, Tony Nnadi, stands in the center (back row)

As had happened a number of times in the past, within less than 48 Hours of that Kuje Meeting, Nnamdi Kanu unilaterally upturned the accord reached and went on to suspend and expel his compatriots in the IPOB top hierarchy (DOS) who had insisted that the Kuje accord be respected.

In all these, the Nzuko Umunna leadership, for inexplicable reasons, and despite my repeated demands and appeals, refused and declined to publish the report of the Kuje visitation, especially that express commitment by Nnamdi Kanu to the Nzuko Umunna delegation, that would embrace the Referendum route.

In an internal memorandum dated March 6, 2017 and titled: “EYES ON THE BALL, FOLKS”, I had pointed out to Nzuko Umunna and the wider igbo leadership collective which was privy to and in the endorsement of the Kuje visitation, the huge opportunity thrown up by the outcome of that visitation, to put a handle on the hitherto intractable question of Igbo cohesion.

I pointed out the open opportunity of reconciling the angry, restive igbo younger generation which. in frustration of what Nigeria was doing to Igboland  and what the Igbo older generation was doing in response, embarked on the agitation for the “Restoration of Biafra.”

In that March 6, 2017 Memo, all I wanted the Igbo leadership collective to do was to openly demand from the Federal Government of Nigeria that the Self-determination questions arising from the raging Biafra agitation by the younger Igbo generation, should now be referred to a general Referendum of the people instead of the high-handed, violent response by the Federal Government of Nigeria to those straightforward issues of Self-determination.

Without equivocation, I posit today, July 8, 2020, that it was the refusal of Nzuko Umunna to publish that report in 2017 that led to the chain of events in Igboland that has thrown up the current need for reconciliation, including the September 2017 Operation “Python Dance” and all the fallouts of it, particularly the charge of Ohanaeze’s collusion with the Federal Government being made by Nnamdi Kanu and his faction of IPOB.

It is an option for stakeholders to find the courage to excavate and work with the truth or to continue, like Nigeria, in the dishonest circumnavigation of “Reconciliation” meetings while studiously avoiding the truth.

In this regard, and for the avoidance of doubt, I wish to inform us categorically that at a time the decisive joint multi-regional push of the LNC and its MNN Alliance Partners is heading unstoppably towards the Referendum threshold, what Nnamdi Kanu and his IPOB are doing in the name of “Biafra Restoration” is a guarantee for  Igbo isolation by the rest of Nigeria and the critical segment of the global community, including the United States, as it destroys the alliances critically required for success. What Nnamdi Kanu and his IPOB are doing also guarantees failure for the current Igbo quest for emancipation from the Caliphate bondage called “Nigeria”, whether we seek greater autonomy or outright independence.

In another vein, I can also inform us authoritatively that contrary to all claims and pretenses, as of today July 8, 2020, no single official of the United States is or had been in any form of discussion with Nnamdi Kanu regarding the quest for liberation of the Eastern Nigeria from the bondage of Nigeria (which RBL campaign has been ignorantly tagged “Biafra Restoration” by those trading in the misery of our people), neither is there any diplomat at the UN discussing any “Biafra Restoration” whatever with Nnamdi Kanu and his IPOB band.

Everything that had been bandied about by Nnamdi Kanu and his IPOB co-travelers about meeting officials in the US, UN and EU Parliament are photoshopped and the Igbo collective is being presented as an unintelligent, dishonest, ignorant and violent people to the global community.

Representatives of presenters at the George Washington University venue of the Side Event on Nigeria during the week-long International Religious Freedom Roundtable organized in July 2019 in Washington, DC. Recommendations from this group were incorporated into the State Department’s final brief.

With the recent stone-to-death order on Chief Nnia Nwodo, the earlier attack on Senator Ike Ekweremadu in Nuremberg, Germany, the recent attack on the Nigerian High Commission in Indonesia and the widespread attacks, intimidation and blackmail being perpetrated by the IPOB of Nnamdi Kanu in the homeland, (including the incident cited by the USCIRF mentioned above 2020 Report),  it will be a miracle if IPOB is not in the coming days, categorized by the United States as an entity of Special or Particular Concern or even a Foreign Terrorist Organization (FTO), with wide-ranging consequences for the Liberation Project and our people, (especially in the Diaspora). They had for one reason or the other identified with an IPOB that they genuinely thought was an effort at self-redemption.

Just as was the case in the 2017 episode, the Igbo Leadership collective can summon the courage to issue a cease-and-desist order to Nnamdi Kanu and his IPOB today or wait for the US to categorize IPOB.

Let us be reminded that it was the failure of the Igbo leadership collective to act when it had the opportunity to arrest the situation in March 2017 that led to the escalations, which resulted in the Federal Government categorization of IPOB  in September 2017.

We again stand on the threshold of an opportunity to seize the initiative on the subject of the recklessness of Nnamdi Kanu and his IPOB or letting the US do it for us while we pontificate dishonestly about “reconciliation”, “peace” and “unity”, just like Nigeria had done since 1970.

The LNC Will Stand Apart from That Bandwagon of Pretenses.

I challenge Nzuko Umunna and all who are involved in the so-called “peace and reconciliation meetings”, particularly Bishop Emmanuel Chukwuma, to probe into the specifics disclosed in this note, particularly the aforementioned March 6, 2017 internal memorandum and the question of the claims by Nnamdi Kanu of meeting with officials of the United States Government.

It appears that a bunch of charlatans driven by sinister self-seeking motives now want to coronate evil in the Igbo hearth.

It also appears that there are now many in Igboland who CANNOT find the courage to tell Nnamdi Kanu and the rogue global “Biafra” franchise he operates the truth and so the rest of Igboland must, somehow, be presented as having given-in to the blackmail, propaganda and idiocy of some new “savior” and “supreme leader”.

Let it be known to the leadership of Nzuko Umunna that their hollow scheme is dead on arrival and that costly consequences will attach to their current role masked as “peacemaking”.