The current document being paraded as the Constitution of Nigeria upon which governance, politics, and politicking are premised is a fraud and a charade. The last and the only people-generated, citizen-mandated, authentic, and genuine Constitution of Nigeria was terminated on January 15, 1966. From that date till October 1975, Nigeria was ruled by military decrees until the late Murtala Muhammed contracted Prof. Ben Nwabueze to write what later became the 1979 Constitution, which was basically a conversion of the various military decrees into a supposed Constitution. After the short-lived democratic period of 1979 to 1983, came another military era which culminated in the production of Decree No 24 through which General Abdulsalami Abubakar contracted the writing of the 1999 Constitution to Prof. Auwalu Yadudu. Therefore, from 1966 till date, Nigeria has never had a Constitution that was made, enacted, and given by the people of Nigeria but rather impositions of one-man-written documents packaged as “Federal Constitutions”.

The worst is the 1999 Constitution for which the following eleven grievances presuppose a rejection of that Constitution and everything that is associated with it.

Grievance #1: LYING IN THE PREAMBLE OF THE CONSTITUTION

Grievance #2: LYING ON THE INDIVISIBILITY, INDISSOLUBILITY, AND “FEDERATION STATUS” OF NIGERIA

There was no time during the writing of the 1999 Constitution that Gen. Abdulsalami Abubakar or Prof Auwalu Yadudu conducted a Referendum or even opinion poll to enable one to conclude that the concept of Nigeria is indivisible and indissoluble. Throughout that said constitution, there is no portion where the Global Positioning System (GPS) or longitude and latitude of the territory called Nigeria were clearly defined. So, how can anyone reading the 1999 Constitution know the exact boundaries of Nigeria with other countries? This claim of indivisibility and indissolubility is further rubbished by the judgment of the World Court on October 22, 2002, which ceded Bakassi peninsula to the Cameroons. The 2011 amendment of the Constitution never addressed the distortion of the territory of Nigeria by this court judgment. Yet, Section-2(1) copiously stated that Nigeria shall be indivisible and indissoluble when in actual fact, a part of it has been removed without constitutional amendment to recognize the removed portion. 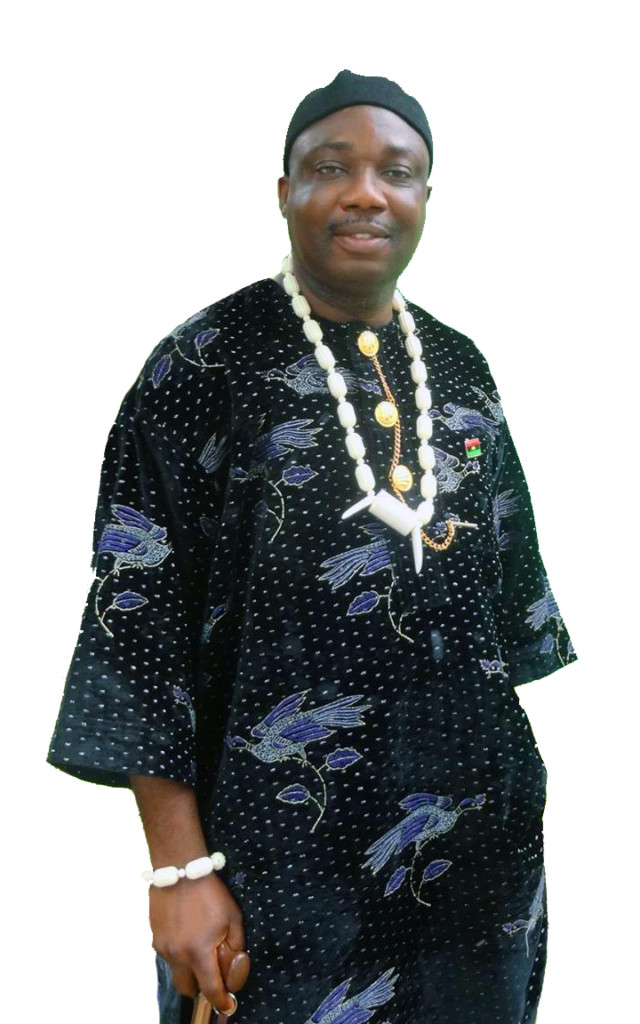 Grievance #3: THE CONSTITUTION ABSOLVES GOVERNMENT OFFICIALS FROM COURT PRONOUNCEMENTS ON ANY ACT OF NEGLIGENCE OR CRIMINALITY

In a people-oriented constitution, those in government are held accountable by same constitution. However, in the case of the Prof Auwalu Yadudu-written “Constitution of Nigeria”, Section-6(6c) legally absolves government officials of any wrongdoing or negligence while in office. Meaning that those in government can misuse their positions and the assets of the country and will still be protected by the Constitution courtesy of this section.

Grievance #4: UNFETTERED AND UNCONTROLLED ACCESS TO THE TREASURY BY THE EXECUTIVE BRANCH AT FEDERAL AND STATE LEVELS

The Prof Auwalu Yadudu-written Constitution of Nigeria effectively handed over the keys of the treasury to the executive branch at the federal and state levels of governance. This was done through appropriation provisions in Sections 81, 82, 121, & 122 of the Constitution. In doing so, the executive branch continues to fleece the citizenry of their commonwealth with constitutional cover and protection. No wonder those aspiring to elective and appointive positions spend money like a drunken sailor, keeping in mind that they will recover same and even more because of this unfettered access and control of the treasury while enjoying constitutional immunity.

Grievance #5: DISPROPORTIONATE CREATION OF 36 STATES IN FAVOUR OF NORTHERN REGION

Even though Abdulsalami Abubakar did not create any state, the Prof Auwalu Yadudu-written Constitution of Nigeria made matters worse by appropriating to the Northern Region; 401 Local Government Areas (LGAs) out of 774, 58 Senate seats out of 109, and 191 House of Reps seats out of 360. This Constitution also stipulates at least one mandatory ministerial slot for each state, meaning that the Northern Region, by default, must have a minimum of 19 ministers. It is also worthy to note that 13 out of the 16 topmost military institutions in Nigeria are located in the Northern Region and the remaining 3 are all located in Lagos.

This disproportionate allocation of states, LGA’s, and allied political seats/positions was ratified in Section-3, Section-48, Section-49, and Schedule-1(Part-I & Part-II) of the Prof Auwalu Yadudu-written Constitution of Nigeria. Please, note that the Northern Region relies so much on this disproportionate number of states to wield influence when it comes to constitutional amendment as stipulated in Section-9 of the fraudulent 1999 Constitution.

Grievance #6: REVENUE ALLOCATION & SHARING SKEWED AGAINST THE SOUTHERN REGIONS IN FAVOUR OF THE NORTHERN REGION

There is no arguing the fact that Southern Nigeria is responsible for generating all the money coming into the coffers of the Federal Government of Nigeria. In particular, the Southsouth and Southeast geopolitical zones generate over 90% of the income through the exploration and sale of crude oil and natural gas. On the contrary, these two regions receive the least amount of money shared from the Federal purse because of the Prof Auwalu Yadudu-written Constitution of Nigeria. In Section-162 of the constitution, the criteria for money sharing are geographical size, number of LGA’s, and population density for each state. This means, for example, that Bayelsa state that produces so much in oil and gas will receive far less amount of money than Kano or Sokoto state that contributes nothing in terms of revenue generation but each of these two states is greater than Bayelsa state in terms of size, number of LGA’s, and population density.

Without the consent of the citizens of Nigeria, Prof Auwalu Yadudu expropriated 68 items from the natural owners to the federal government under Section-4(2) with a detailed listing of those items in Schedule-2(Part-I) of the 1999 Constitution. By virtue of these 68 items on the exclusive list, the federal government effectively stripped the owners of the resources of their rights to explore, exploit, and manage the sales of these resources. It also deprived the state governors of the ability to provide adequate policing and security of the citizens within their states. Because of this exclusive list, certain developmental projects and infrastructural initiatives cannot be embarked upon by either the state government or even private organizations as doing so will be going contrary to constitutional provisions. This has left the states, communities, and individuals poorer, grossly depraved, and underdeveloped.

Grievance #8: BLANKET IMMUNITY TO THE PRESIDENT, STATE GOVERNORS, AND THEIR DEPUTIES AS WELL AS THOSE WHO COMMITTED HEINOUS CRIMES BETWEEN 1966 AND 1999

The Prof Auwalu Yadudu-written Constitution of Nigeria provided a blanket legal and prosecutorial immunity to the President, his vice, and the 36 state governors and their deputies while they are in office as stated in Section-308. To protect those who were in government in the past, Section-6(6d) gave another blanket immunity from legal action for those who looted the treasury as well as those who committed genocide and other heinous crimes between January 15th, 1966 and May 29th, 1999. Therefore, it is not surprising why genocidists like Yakubu Gowon, Ibrahim Babangida, Olusegun Obasanjo, Abba Kyari, Muhammadu Buhari, and Theophilus Danjuma are walking freely today without repercussions on their murderous past.

Mediocrity is entrenched in the lives of citizens by the Prof Auwalu Yadudu-written Constitution of Nigeria through the establishment of Federal Character Commission as stipulated in Section-153(1c). Other constitutional provisions that engender the culture of lassitude, mediocrity and dismal performance include Sections 14(3), 84(4), 223(1b), etc. This inherent support for mediocrity by the 1999 Constitution accounts for the lackluster performance in governance and other aspects of national life. It is a well-known fact that different admission and hiring criteria are used for different regions of the country. Specifically, standards and criteria are lowered for those from the Northern Region while those from the Southern regions require very stringent and higher standards for the same situation.

Grievance #10: ACKNOWLEDGMENT AND ELEVATION OF LAND USE DECREE/ACT OVER AND ABOVE THE CONSTITUTION

The Land Use Decree was promulgated in 1978 by General Olusegun Obasanjo and re-baptized as Land Use Act in the Prof Auwalu Yadudu-written Constitution of Nigeria. Whereas every law is required to be subordinate to the constitution as noted in Section-315(1), the Land Use Act is one of the four Laws that are exempted from this subordination as stated in Section-315(5). This Land Use Act has made it possible for Government, at federal and state levels, to access and use any land they deem fit in Nigeria and may or may not pay any compensation to the natural owners of such lands. It is this Land Use Act that the Caliphate-controlled federal government of Nigeria is relying upon to forcefully create grazing routes and cattle colonies in any and every part of Nigeria.

Grievance #11: OATHS OF ALLEGIANCE/OFFICE THAT HANDCUFF THOSE IN POWER FROM DOING THE RIGHT THING

The Prof. Auwalu Yadudu-written Constitution of Nigeria ended with an oath of allegiance and oath of office for all public office holders. The common thread on both oaths is the undertaking by the oath taker to preserve, protect, and defend the so-called “Constitution”. Therefore, irrespective of the inherent errors and intended lopsidedness (skewed in favour of the Northern region) of the 1999 Constitution, the oath taker must comply and obey the FRAUD. For instance, because of the contents of the oaths, state governors are handicapped and helpless in the face of deplorable conditions of the infrastructures in the Southern regions which are on the 68-item exclusive list because the Caliphate-controlled federal government does not care about the maintenance of such infrastructures and the 1999 Constitution bars these state governors from doing anything on any of the items contained in Federal Exclusive Legislative list. 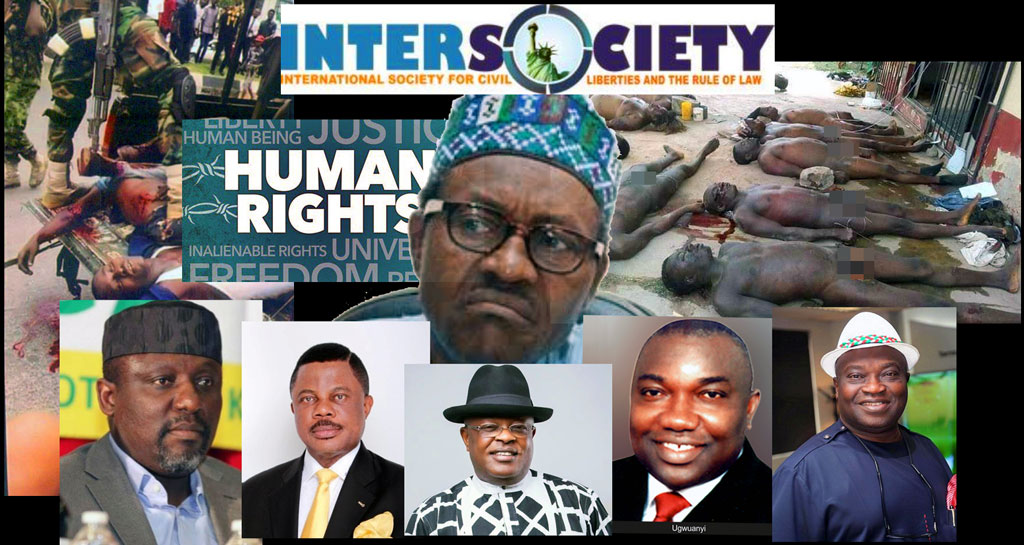 Intersociety has been consistent in taking on governments of the Southeast and Abuja over rampant extra-judicial killings of unarmed nonviolent pro-Biafra youths.

The Prof Auwalu Yadudu-written Constitution of Nigeria is so fundamentally flawed that the best solution is its total repudiation and rejection. A truly federal constitution is generated, written, enacted, and agreed upon by the citizenry and NOT written by one man as in the cases of Prof. Ben Nwabueze (1979 Constitution) and Prof Auwalu Yadudu (1999 Constitution). For those from the Southern region of Nigeria who still daydream on improving this 1999 Constitution by way of amendments, I advise them to read Section-9 of the said constitution in order to understand how impossible it is to achieve any amendment when such alteration is not in the interest of the Northern Region (see Grievance #5).

Let me remind those who are working tirelessly to convince people to obtain their permanent voter’s card (PVC) and to prepare to participate in the INEC-controlled electoral processes in the coming year, that at the end of it all, whoever comes to power at any level of governance must subscribe to Schedule-7 of that Prof Auwalu Yadudu-written Constitution of Nigeria. The day we reject and throw the Prof Auwalu Yadudu-written Constitution of Nigeria into the trash shall be the day our problems will be over, and a new glorious dawn shall begin for the various constituent nations that make up the British-created criminality and contraption called Nigeria.

Dr. Okenwa Nwosu perfectly captured it in his recent treatise on a related matter by stating that “for Nigeria, the first order of business in Restructuring things is to trash the forged and imposed 1999 Constitution and ask stakeholders, who are the true owners of Nigeria, to first agree to continue together or separately and thereafter craft a brand-new constitution to clarify the agreed path forward.”