Nigeria Was Bought & Sold Like a Commodity; It Has Never Been a Nation 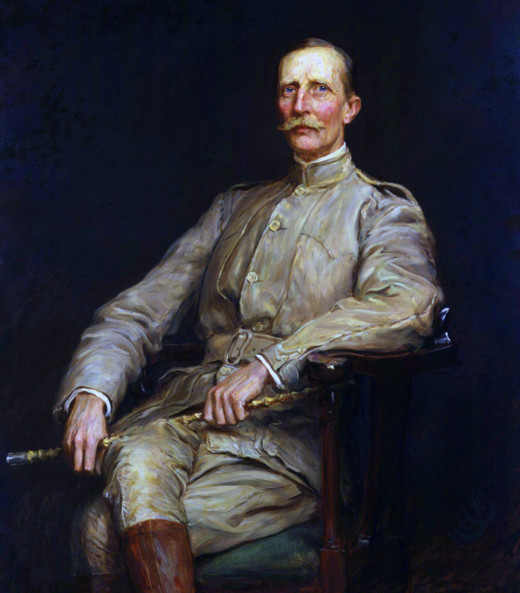 George Dashwood Taubman Goldie (1846-1925) utilized his Royal Niger Company to galvanize the Lower Niger and contiguous territories under British influence by outmaneuvering rival French & German prospectors in the subregion. He later sold the acquired territories to the British Crown for huge profit.

Born on the 20th May 1846 at the Nunnery, Douglas, in the Isle of Man, Sir George Dashwood Taubman Goldie was the youngest son of Lieutenant Colonel John Taubman Goldie Taubman, the Speaker of the House of Keys of the Isle of Man, by his second wife, Caroline Everina, the daughter of John Eykyn Hovenden, a Barrister of Hemingford Grey, Huntingdonshire. He was educated at the Royal Military Academy in Woolwich, England and spent two years with the Royal Engineers.

Sir George Taubman Goldie began business through his family palm oil business which was acquired in 1875. He arrived the shores of Asaba in the Niger River area of West Africa in 1877 as a palm oil merchant, after visiting Egypt in 1867 and spending three years in the Sudan, studying the Saharan and the Sudanic regions of the northern Africa. Shortly after his arrival, he became a British commercial firms’ agent. Due largely to international territorial trading rivalry on the Niger River among European traders, he consolidated the British interest by amalgamating all the British commercial firms in the Niger River area in 1879 into one British monopoly company known as the United African Company (UAC) which he administered.

To compensate Sir George Taubman Goldie for his forthright stance for the British Government in the Niger River area and to consolidate the British Government holds on the region, a charter status was granted the National African Company in 1886 to operate as the Royal Niger Company – with the full authority to push its trading activities northwards to the upper Niger River area. In so doing, the company set up the northern headquarters at Lokoja (now Kogi State capital in Nigeria). Treaties were signed with several northern local authorities including Sokoto and Gwandu, thus depriving the French and German rivals access to the northern region. One of the principal officers of the company who signed the treaties with the local authorities in the north on behalf of Sir George Taubman Goldie was Frederick Lugard who later in 1900 became the Administrator (Governor) of the Northern Protectorate and eventually the Governor-General of Nigeria.

The Royal Niger Company operated in the upper and lower Niger River areas, without doubt, under several internal and external hostilities. Nupe and Ilorin emirates never welcomed the company’s presence and clashed with the company’s forces. In 1897, Sir George Taubman Goldie, who had already taken over the full control of the company as Governor after the death of Lord Henry Aberdare in 1895 had to enter the battle himself. He led the fierce company’s military forces himself against both emirates, crushing their armies. These successes gave company control over a large territory of the northern region.

Otto von Bismarck, despite the Berlin Conference’s decisions on the status of the British Government over the Niger River area, maintained constant pressure on the British government to compel the Royal Niger Company to allow the division of the Niger River areas among other trading firms. He was a persistent antagonist of the company. He made strenuous efforts to secure the basin of the lower Niger River area and the Lake Chad for Germany. In Asaba, he demanded heavy damages against the company for the expulsion of one Herr Hönigsberg of Germany from the Niger River area. Herr Hönigsberg was put on trial in the company’s High Court in Asaba with Sir James Marshall as Chief Judge for his role in stirring up trouble on the Cameroon frontiers against the Royal Niger Company. Unfortunately for Otto von Bismarck, he fell from power in 1890, leading to the opening up of the door for a final settlement of the Nigeria-Cameroon frontiers.

In 1898, the British Government exercised its reservations over the possibility of the Royal Niger Company to continue to hold its own against these internal and external hostilities – especially the ones occasioned by France and Germany. It persuaded Sir George Taubman Goldie to surrender the territories under the control of the Royal Niger Company to direct British administration. By 1899, Sir George Taubman Goldie had agreed to relinquish his company’s authority over the area. Therefore, the charter of the company was then revoked and British officers were sent to Nigeria to take over the administration of the territory. On the 1st of January 1900, the Royal Niger Company transferred its territory to the British Government for the sum of £865,000. 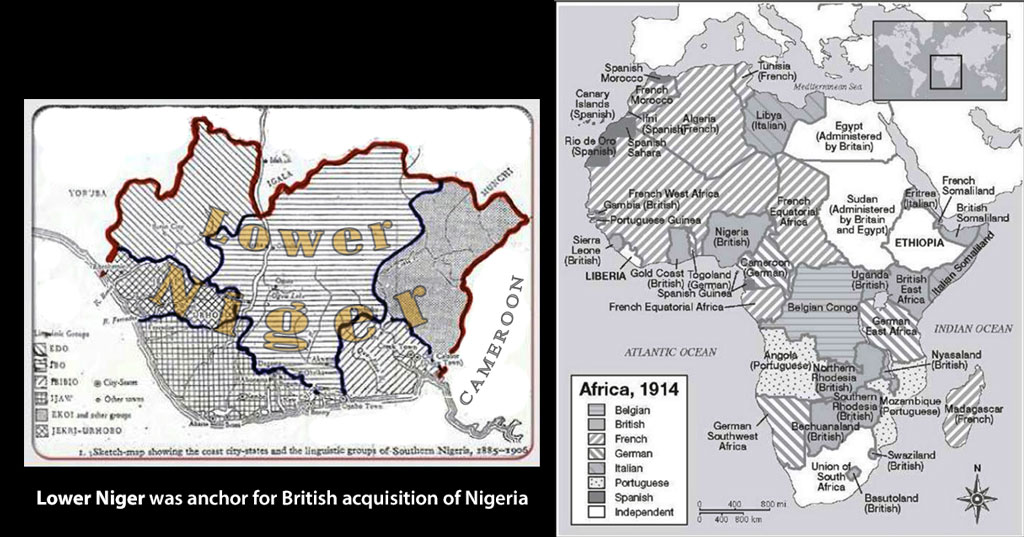 Lower Niger, because of its highly valued palm produce, was the epicenter of European trade with this part of West Africa throughout the precolonial & colonial era. Palm oil helped to lubricate Industrial Revolution in Europe.

Sir George Dashwood Taubman Goldie remained active in African and British affairs. He was a member of several bodies that investigated chartered company activities in southern Africa. He became a Fellow of the British Royal Society in 1902 and was appointed a British Royal Commissioner to inquire into the South African Boer war (a war fought in South Africa from 1899 to 1902 between the British and the descendants of the Dutch which eventually ended in favor of the British). In 1903, he was invited by the Chartered Company of South Africa to examine the situation leading to the agitation for self-government in Rhodesia. In 1905, as a member of the British Royal Commission, he was ordered to look into the disposal of the war-stores at the end of the South African Boer war. He was elected the President of the Royal Geographical Society in 1905 – the position he held for three years. In 1908, he was chosen as an Alderman of the London County Council. Sir George Taubman Goldie was also, at some point, the Vice President of the Royal Colonial Institute.

Meanwhile, in 1887, he was knighted the Commander of the Order of St Michael and St George. He received the honorary Doctor of Civil Law of the University of Oxford and the honorary LL.D of the University of Cambridge in 1897. He married Matilda Catherine, the daughter of John William Elliott of Wakefield in 1870. He died in London and was buried in Brampton Cemetery in London. He was survived by two children.