Two Important Lessons of Nuremberg: Igbo Political Leaders Should Focus on Their Jobs  & Cease to Be Human Mascot for Unitary Nigeria

For public figures, especially politicians, how they present themselves in open spaces matters. What any politician avoids is getting into acts that have the potential of riling the sensibility of his constituents, in particular, and mainstream society, in general. It would be perceived to be an offensive act if the main invitee to a Jewish event decides to adorn oneself in Nazi emblems and insignia, for example. National emblems convey messages that transcend all aspects of society, both the good and the bad. Today’s Unitary Nigeria is headed inexorably down the path of perdition from which recovery seems impossible. Beyond the visible national failure in realms of security, economy and overall sense of wellbeing, many constituents nurse a lot of disaffection for the way in which the country is run by the incumbent President Buhari.

Truth be told; the Nigerian government’s popularity rating has never been this low in the perception of the average citizen. Politicians who appear to relish the unacceptable status quo instead of doing their utmost to solve the challenging existential challenges of the moment are wont to elicit the ire of the discontented public.

Senator Ike Ekweremmadu has been seen in the public sporting a garment emblazoned with the Nigerian Coat of Arms. In the context of Igbo dressing code, the senator intentionally chose the fabric that replaced the “isiagu” design with the Nigerian emblem/insignia. Perhaps, the senator’s wish is to ultimately persuade the majority of his fellow kinsmen to follow his lead in becoming unpaid mascots for a failing Nigerian Unitary government. Senator Ekweremmadu is the first political leader of Igbo nationality to be seen going on the limb to offer his physical body as a manikin for the public display of Nigerian government’s paraphernalia.

Being a senator should make him to think of the constituents he represents and their sensibilities first before that of the central government which has nothing but disdain for the strategic interests of Ndiigbo. The government whose insignia Senator Ekweremmadu adorns himself with shows no concern, whatsoever, for the senior legislator’s constituents who are serially being attacked and butchered in their own ancestral hometowns.

One may find a justification for wearing the said offensive outfit while attending to official duties in Abuja in government circles. But to adorn oneself with the same garment while appearing before a gathering of Igbo elite corps to give a keynote speech in August 2019 connotes a poor sense of judgment and reckless insensitivity to the anguish of the contemporary Igbo in today’s Unitary Nigeria. The choice of dressing could also have been deliberate. Senator Ike Ekweremmadu, as an experienced politician, may be in the pursuit of a spurious political agenda that is best known to him and his coterie.

The public attack on Senator Ike Ekweremmadu in Nuremberg, Germany may have been triggered by some other issues, but many are now, in retrospect, justifying the assault because of the in-your-face outfit won by someone billed to deliver a keynote address at a pan-Igbo sociocultural festival. The senator ought to have known better and shown greater respect for his fellow kinsmen anticipated at the same Iri-ji festival. 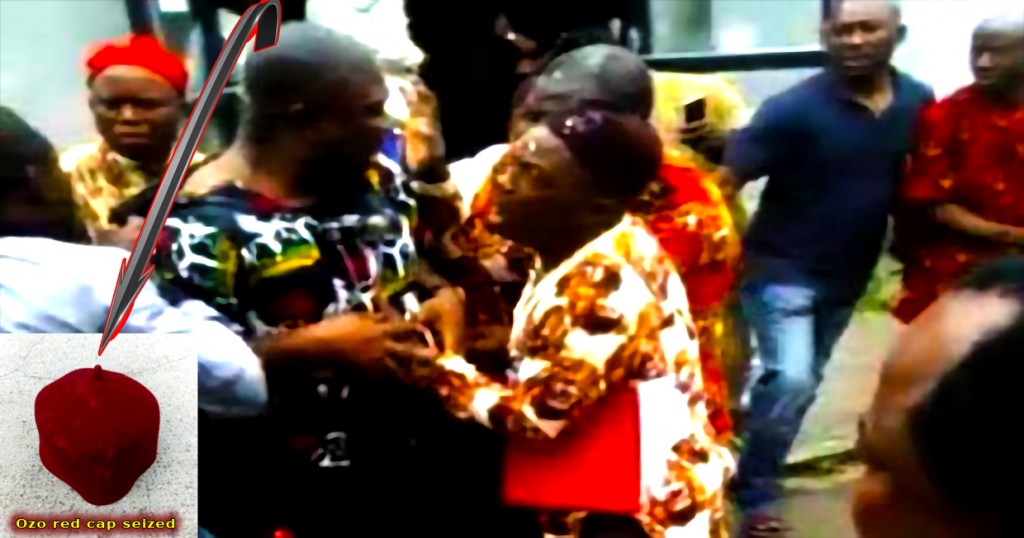 Senator Ike Ekweremmadu (capless) was accosted by irate pro-Biafra agitators in Nuremberg, Germany during a recent visit. IPOB adherents jostled with the senator, seized his ozo title cap and forced him to escape from the event’s venue.

Is Nuremberg a Watershed?

There is more to the Nuremberg incident than what was captured by live video recording of the fracas. First thing is that such an adroit confrontation between Nigeria-based political leaders and their Diaspora-based hosts is unprecedented. Based on this fact alone, it should be concluded that the visiting senator got an unanticipated shock of his life in Nuremberg. The same Senator Ekweremmadu has been hosted severally in ornate convention galas by the US Igbo Diaspora community where he was treated like royalty. It is evident that the US Igbo Diaspora community differs fundamentally with its European-based counterparts. While the former tends to fawn on visiting Nigeria-based political leaders, the latter is not so inclined. The US Igbo Diaspora community is more tolerant to the thieving home-based politicians than their European counterparts.

Igbo Diaspora communities worldwide repatriate tens of billions of US dollars annually and a good amount of that sum is expended in the upkeep and development of Alaigbo. The Igbo Diaspora community, therefore, has a clear stake in deciding the fate of our shared ancestral lands, just as much as those who reside within the borders of Nigeria. Politicians of Ekweremmadu’s stature are usually isolated and insulated from the public, even their very own constituents, by tiers of security details paid for at the government expense. That is the legacy of autocratic military rule over Nigeria for decades.

Such a privilege is not accorded to politicians in matured democracies of many Western nations. The duty of the army and Police is not to shield political leaders from the people they are supposed to be representing in government. Some Nigerians had anticipated the German Police to pounce on the IPOB elements that allegedly accosted Senator Ekweremmadu in Nuremberg and remand them in prison without any option of going through the law courts. The German Police called to intervene and restrain the senator’s assailants have since confirmed that the whole matter is closed and no further investigation shall be done.

It is trifling to regard the Nuremberg incident as a mere affront by some elements of the Indigenous Peoples of Biafra (IPOB) executing the directives from their “supreme leader” based in London, UK. There’s more to it. A precedent has now been set that all politicians with a case to answer to “We the people…” shall be accosted – if not in Nigeria, when they travel overseas as they often do. Furthermore, political leaders must have a compelling reason to be feted by the Igbo Diaspora communities as before. There is a new message here. Home-based political leaders should learn to stay on the jobs for which they’ve been elected and attend to the people’s problems. Junketing overseas at the flimsiest of excuses must now be looked upon as a thing of the past.

Yes, the Nuremberg incident is a watershed for home-based Igbo political leaders. Make sure there is a cogent reason for accepting invitations for public appearances before Igbo Diaspora communities worldwide before leaving home. And most important, dress appropriately for the occasion.