Killings of African Immigrants by South African Blacks Is Black-on-Black Crime: It Has Nothing to Do with Xenophophobia

This video is focused on the ongoing killings by the South African Blacks of immigrant Blacks from other African countries. The killers have, thus far, attempted to justify their murderous acts by blaming their escalating socioeconomic woes on Black Africans who have migrated to the former White-ruled country and taken all the jobs and economic opportunities from the indigenous Black population. The killings are being characterized as being driven by “xenophobia”. In simple lingo, it is assumed that the indigenous South Africans are made to understand that compelling Black African immigrants to leave and return to their home countries holds the key to their economic salvation. To attain their dream, all non-South African Blacks are hunted down, killed and their homes, shops looted and burned by rampaging mobs who are supposedly driven insane by “xenophobia”.

Who then is behind this criminality and why is the South African security outfit incapable of reining in the rampaging murderous mobs? Again, the answer to this poser is not farfetched. Political leaders are the instigators and the ones inciting the killings, possibly as a matter of state policy. Since the demise of apartheid, political power has been ceded to the enlightened South African Blacks, but the country’s economic power still resides with the South African Whites, for obvious reasons. The African National Congress (ANC) promised a better standard of living for the Blacks who have historically been kept out of the country’s economic activities by almost a century-long rule of the racist apartheid government. The trusted founder of democratic South Africa, Madiba Nelson Mandela, is long dead and his promise is not being fulfilled by the political leaders who succeeded him. Some say that the economic lot of the average South African is still dismal and worsening by with each passing day. Unemployment in South Africa is said to be as high as 33% of the population. 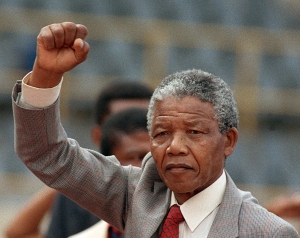 Anti-apartheid leader and African National Congress (ANC) member, Nelson Mandela, raises a clenched fist, arriving to address a mass rally, a few days after his release from jail, 25 February 1990, in the conservative Afrikaaner town of Bloemfontein, where ANC was formed 75 years ago. (Photo credit should read TREVOR SAMSON/AFP/Getty Images)

Mandela’s successors, who are either incompetent or ill-motivated, have failed woefully in meeting the expectations of the majority poor South African Blacks. The jobless South African Blacks see other African immigrants in their country doing reasonably well. In fact, the preponderance of the African immigrant population, especially those from Nigeria and other parts of West Africa, don’t only have well-paying jobs, but they also are entrepreneurs who begin and run their own business. The successful immigrants employ South Africans, thereby helping to reduce the unemployment rate in their host country. But South African political leaders had to contrive a reason why their constituents are still unable to receive the benefits of a free democratic South Africa. The cheap way out is to blame the influx of foreigners into the country as the reason why indigenous South Africans have no jobs or business opportunities to advance their own lives.

If Black African immigrants to South Africa are identified as the obstacle to the fulfillment of enhanced socio-economic well being of the populace, the only question is what to do. Get rid of the immigrant nuisance and South Africa shall immediately become restored to their rightful owners. Some political manipulators are said to have compared the dominance of immigrant Black Africans as akin to what obtained in the apartheid era. This alone would be enough to incite an enraged desperate Black South Africans to undertake the task of clearing their country of immigrant Black Africans. The way to send the message is to rain death on those who come in to steal jobs and economic opportunities meant for the indigenous population of the country.

That the South African government, which has the services of Africa continent’s best-equipped Police and military force, cannot stop the bands of rampaging mobs from perpetrating senseless indiscriminate murder of innocent fellow Black Africans living legally in their country is quite noteworthy.

Well, as this video concluded, this insanity must stop, sooner than later or else…