Sultan of Sokoto, Withdraw Your Fulani Herdsmen Terrorist Militia from Yorubaland Voluntarily or Else… – Demands AOKOYA

Text of an Open letter to the Sultan of Sokoto, Abubakar Said and the Fulani leaders dated August 08, 2019 by a coalition of Yoruba nationalist groups.

The Sultan of Sokoto and Fulani Leader,

THE STATE OF THE NATION

We write to honor you with this letter, given the floundering opportunities for a dialogue on the future of Nigeria, which has eluded the various ethnic groups in Nigeria and which may not enhance itself too soon.

Given the drumbeats of armed violence and extremism perpetrated largely by your people, and the fleeting prospects of a national dialogue, we hope this letter will not be the last opportunity to engage you and the Fulani nation constructively.

We, on behalf of Apapo Oodua Koya, (AOKOYA), a coalition of several Itsekiri, Edo and Yoruba groups, write with our deepest feelings about the Nigerian state and what appears to be the pitfalls that lay ahead, most of which are oiled and orchestrated by your own people, the Fulani, albeit consciously.

We recall that your forebears came to power through brutal and bloody conquest of indigenous peoples in many parts of Northern Nigeria under the guise of Islam even though Islam had taken firm roots in Yorubaland, Kano and Bornu Empires as early as the 11th century.

Since your sojourn in Nigeria, you have been very lucky.

A whole country of over 300 ethnic groups, was handed over to you, a foreigner, first through the conquest of some of its part – you, who never owned an inch of land centuries earlier in this hemisphere.

You have reaped the fruits which trees you did not plant and you knew not when they were planted.

Moreso, you were from a family of wanderers and your emergence as Emir and the traditional ruler was unusual, having no royal blood in your veins ab initio.

No doubt, you succeeded in taking over the land, the main means of production of these innocent peoples whose main offence was that they were too caring, too gentle, too subservient and accommodating of foreigners in their ancestral homeland, Today, you sit on a throne soaked with the blood of millions of innocent souls anguished with deafening ears to the agony of the spirit of millions of victims of the horrendous killings by your men, who came from Fouta Jallon in Senegal, only some 210 years ago.

The British left in 1960 and you emerged as the main benefactor even though your people were not known to have fought for Independence.

You were wise enough to plant your people in the security institutions, a reflection of your preference for force and brigandage instead of a knowledge-driven society.

Through direct military intervention or subterfuge, sly plots, you have been ruling Nigeria or determining who rule Nigeria since 1960. This is a stroke of rare luck that only courageous people can manage for some time but needs wise, intelligent, decent and conscientious people to manage for a millennium.

Under the false, artificial creation called Nigeria, your people produce no oil, yet you appropriate and decide how the resources should be expended.

You have no access to the Atlantic Ocean, yet you decide which goods should be imported and which vessel should ply routes that indigenous owners of this God-given oceans had been using for centuries.

All the military weapons were bought not by your money, but you decide who should use them and who should be killed by the same guns. You have no rich scholarly tradition, yet your people sit on the Nigerian Universities Commission, (NUC) and decide the faith of other Nigerians.

You located all the military institutions in your land, more out of fear than out of love for justice and fair play.

Ninety percent of Nigerian resources are sourced from the South and Middle Belt, yet you decide how the funds should be spent. Did you think this irresponsible way of life will continue forever? Did your people think we are foolish and even if we are, did you think coming generations will accept this brazen exploitation? We have called for dialogue on these issues, but you call it treason.

The truth is that you have grossly mismanaged this opportunity. Your ruinous and destructive tradition has robbed on all Nigerians. Your intuition for aggression has become a national culture. Your disdain for debate and logical criticisms has been imbibed by Nigerians who continue to gravitate towards the custodians of political power, whose way of life must be imbibed for recognition.

You have ruined and destroyed this whole nation at your beckon due to your exclusive, narrow, primordial and savage instincts driven only by your self-interest and your brutal and non-negotiable desire to conquer and subdue every nationality in Nigeria. This is a tall task which you are hell-bent on executing.

THE INVASION OF YORUBALAND BY FULANI HERDSMEN

We like to caution you on your latest antics to renew your grand 1804 design to conquer the entire country, not through ideas but through the most savage tradition of killings and maiming.

This, to us, is at the bottom of the current Fulani kidnapping in Yorubaland. We wish to inform you that we are aware of your grand plan to renew a project done halfway and put on mute mode since the defeat of your forces in 1840 by the Yoruba army.

We are worried that you and your Fulani people have been suspiciously silent on the kidnapping of Yoruba people, the killing of our young professionals, including the killing of the daughter of a prominent Yoruba leader.

We were not surprised that you and the other Fulani leaders did not consider it necessary to send condolence messages or even visit the family of the slain woman. This can only mean your tacit approval or at least, a philosophy of cold compromise.

Please, be aware that, in the past two years, records show that 689 Yoruba people have been kidnapped by your people, Fulani and about 400 reported cases of rape, including rape of toddlers. Out of this number of the kidnapped, 356 were women, and out of that number, 250 were married women.

In all, 112 people were killed by your Fulani people either for resisting kidnap or for failing to pay ransom. This may mean nothing to you, but to us, it means a lot.

We urge you to imagine a group of armed Yoruba cocoa farmers storming forests in Kano, Katsina and Sokoto, kidnapping Fulani people, raping their young girls and even killing the daughter of an Emir or a prominent Fulani leader? Can you also imagine the same heavily armed Yoruba cocoa farmers occupying your forests, stopping your people from farming and preventing your people from plying the highways in their ancestral homes?

To make the matter worse, imagine the armed Yoruba cocoa farmers carry out these terrible crimes under the banner of a Yoruba man as the Nigerian President. How will you feel?

As it is, your people, the Fulani, are digging their hands down our throats. They are entering our bedrooms and sleeping with our mothers and wives. These actions are not only against Islam; they are against humanity.

These latest actions plus our experiences in the past have combined to renew the energy of millions of Yoruba people who want a country of their own. Whether you like it or not, this will happen. God, before whom you and your big crown are like but a filthy rag, will make it happen. 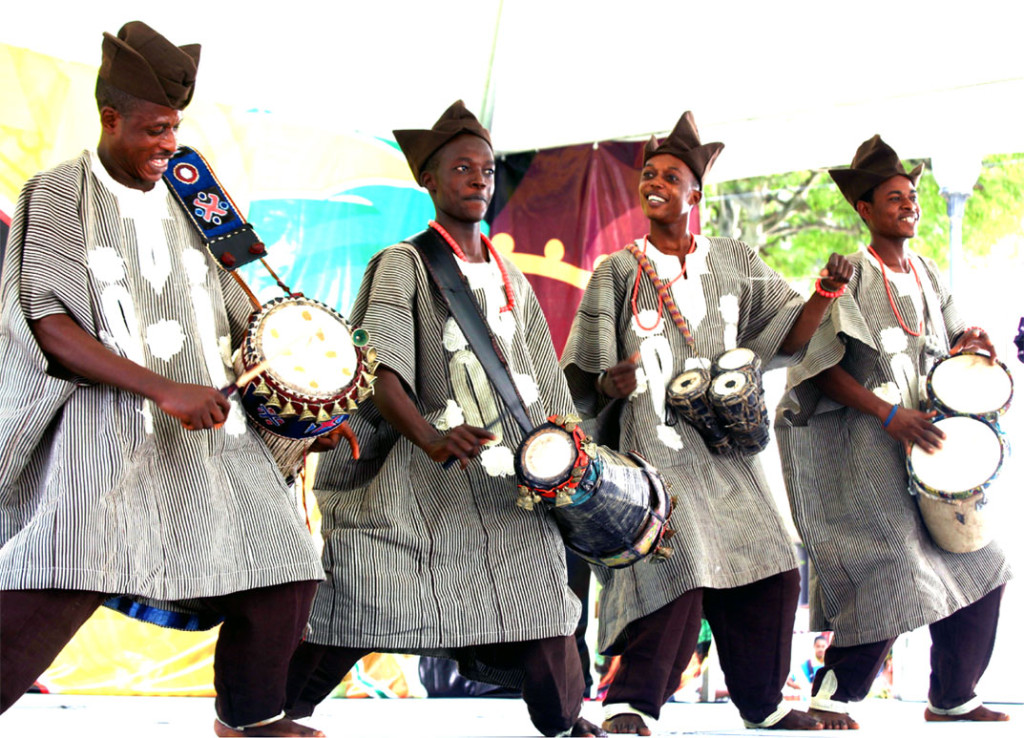 A Yoruba talking-drum musical troupe in public performance. Yorubaland was invaded by the Fulani who succeeded in seizing the ancient City of Ilorin. Since then, the Emir of Ilorin has been Fulani – in a city that is ethnically Yoruba.

We urge you to prepare yourself to dialogue or if you chose the path of violence, there will be a proportional response. Having Yoruba or Igbo Republics is something you do not wish to hear, but which is imminent and inevitable.

Please, be aware that the Yoruba do not begrudge your values and the ways of your living, all we are saying is that we want to live our lives, design our political and cultural architecture, live and die on our own terms.

The forthcoming Yoruba Republic will be glad to accommodate righteous Fulani people who respect our civilizations and the laws of our fatherland.

We wish to use this opportunity to advise you and your people to be aware that you have no power to conquer Yoruba Nation. Your forebears tried and failed. Your military and political surrogates tried, marked with killings, maiming and destruction of our economy, yet they failed.

Sir, the Yoruba people stand for peace and not war. We would prefer these issues to be resolved amicably without firing any gunshot. But we wish to say that if your heart remains rebellious and your soul defiant, the Yoruba people are not afraid to confront you, once again, the way we did some 175 years ago – this time in the most ferocious manner you can ever imagine. It is necessary to let you know this even though we are aware that you will not change the conquest desires of your heart.

We wish you a happy Salah and Allah’s wisdom to know and do what is right.