Nigeria’s president, Muhammadu Buhari, is reported to have recently reiterated that Restructuring is not Nigeria’s problem, but instead, it is the process, whatever that means. Paraphrased, Buhari sees nothing wrong in the fact that a country structured and run like a Unitary state, as defined by the imposed 1999 Constitution, is being disingenuously called a federation. But those representing the Nigerian constituents at the National Assembly disagree as manifested in this video. Senator Olusola Adeyeye hammered home the point that the 1999 Constitution, which was written by General Abdulsalami’s dictatorship, was put into effect with military Decree No 24 of 1999. Nigerian constituents were never allowed to vet the constitution before it was put into force on May 29, 1999. 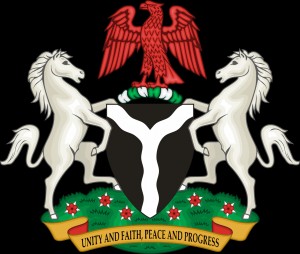 Emblem of the central government of Nigeria in Abuja. The nation’s motto is Unity, Faith, Peace and Progress.

Nigeria’s official emblem is emblazoned with the motto that reads – Unity, Faith, Peace & Progress. The raison d’être for Nigeria is to guarantee these four virtues in the lives of Nigerians, individually and collectively. Here is the question. Has Nigeria fulfilled any of the themes of the nation’s motto since the introduction of the 1999 Constitution? The answer is an overwhelming no. Why? Senator Adeyeye fingers the 1999 Constitution. He further explained that, no matter how much faith the citizenry commits to nation-building, the 1999 Constitution cannot give Nigerians national unity, peace and progress. The four key goals for Nigeria’s existence are not met (some would say negated) just because of the imposed 1999 Constitution. What then makes this constitution ineffectual, one might ask?

Nigeria is erroneously called a “federal” republic made up of 36 states and Abuja Federal Capital Territory. There are many things wrong with this nomenclature and characterization. What is a federation?
“A federation (also known as a federal state) is a political entity characterized by a union of partially self-governing provinces, states, or other regions under a central federal government (federalism). In a federation, the self-governing status of the component states, as well as the division of power between them and the central government, is typically constitutionally entrenched and may not be altered by a unilateral decision of either party, the states or the federal political body. Alternatively, a federation is a form of government in which sovereign power is formally divided between a central authority and a number of constituent regions so that each region retains some degree of control over its internal affairs.” – Wikipedia

Furthermore, federating states usually derive their own respective constitutions which perform two critical functions namely, (1) defines the relationship between the federating unit and the central authority and (2) delineates the modus operandi for the federating units’ internal administration and governance. If Nigeria were a federation, there should have been a minimum of 37 distinct constitutions – one for each of the 36 states and one for the federal government at the center.

The so-called federal government of Nigeria has only one constitution – the one imposed by General Abdulsalami Abubakar’s authoritarian regime by the passage of Decree No 24 of 1999. With this single constitution, the 36 states, Abuja Capital Territory and the central government are run from one location at the Aso Rock Villa, Abuja. This sort of setup is called Unitarism. Labeling the current structure in Nigeria as “federal” is an anathema.

As Senator Adeyeye stated, the crafters of the 1999 Constitution disingenuously included as much as 68 items into the federal Exclusive Legislative List while only 12 are left in the Concurrent List. This means that only the federal government in Abuja has the constitutional right to make laws regarding as many as 68 items that relate to the average Nigerian’s existential needs. The 36 state legislatures have no legal powers to deal with all the 68 items in the federal exclusive legislative list. Most important, constituents of the 36 states, who are the actual owners of Nigeria’s sovereignty, have no constitutional authority to use the state legislature closer to home to make laws that can affect the common man’s livelihood. Even the registration of businesses, corporations, associations, etc. must be done only by the Corporate Affairs Commission (CAC) located in Abuja, for example.

Commonsense informs, even the most skeptical, that until the imposed 1999 Constitution is jettisoned with its 67-item Exclusive Legislative List, Nigeria and its citizenry are condemned to perpetual insecurity, unemployment, mass poverty and associated nonstop bloodshed. It is discouraging that not many, even among the members of the National Assembly, were present to hear their fellow legislator’s presentation on this very fundamental matter on nation-building.

Without a constitution made by and agreed to by the country’s constituent stakeholders, Nigeria has no basis to promising national unity, peace and progress to its citizenry. As if to prove this point, Nigeria has known no unity of purpose, peace and visible socioeconomic progress aimed at uplifting the standard of living of the average citizen, despite politicians’ pledge to provide the masses with the “dividends of Democracy”.