The Conventional Wisdom of Not Speaking Evil of the Dead Is Wrong, Especially for the Undeserving Ones – says Remi Oyeyemi

“The evil that men do lives after them.” — William Shakespeare

I am aware that this is breaking with conventional wisdom. I am conscious that this is a rebuke of tradition. I am not oblivious to the fact that it is against the norm. I am not unaware that this is not in tune with the mainstream. I am aware some would loath me for it. Some would deride me. Others would call me names. Those who really never liked my guts would have this reinforce it for them. But those who have the objective ability to see things the way they are and are able to call them as precisely as they should would see some sense in this.

The idea of not speaking ill of the dead would not be a good idea, especially if the dead person did nothing deserving of praise. The idea of praising the dead, regardless if the dead, during his or her life, was mean spirited, greedy, selfish, inconsiderate, odiously acquisitive, ruthless and disdainful, is totally unacceptable. It is wrong and should be done away with. We should be able to say exactly what kind of person someone was during his or her life.

I have been reading in the media unbelievable eulogies about the late Chief of Staff to President Muhammadu Buhari, Mr. Abba Kyari. I have been reading some hypocritical praise-singing of this man who, to many Nigerians who celebrated his infliction a couple of weeks back, was no less a monster, because he has become the casualty of the Coronavirus 19. I have read from those who hated him saying embarrassingly ‘nice’ things about him. What a fraud. What a dishonesty.

It is a sad day when people cascade into casual casuistry with unbridled audacity. It is an act of deliberate undermining of the societal values to heap praises on someone whose remains ought to be used to cast away evils from the entire society. To project a mean-spirited public office holder as a saint when he is not is a sin in itself.

I take serious objection to the rain of praise that has been raining down on the corpse of the late Abba Kyari. Though, this is a matter of choice to which we are all entitled, depending on the way we see it. In my own view, Kyari is not deserving of any praise whatsoever. It is alright for President Buhari to cry himself hoarse. Kyari was his Chief of Staff and his relative. It is okay for his goons in Aso Rock, his partners in crime, to weep without end. It is okay for those who are beneficiaries of his corrupt practices, his impunities to gnash their teeth to numb. It is their loss. His immediate and extended family members reserve the inalienable rights to mourn him infinitely and indefinitely.

I also believe that it is alright for the rest of us who are victims of the first family and their collaborators in Aso Rock, to acknowledge the loss of a soul, not because of any other reason other than the fact that we are all human beings. And this is where it ought to end. No more, no less.

For those who are Buhari’s sycophants and who still hope to benefit from the misery he is visiting on Nigeria, it might be acceptable to them to shed their crocodile tears even if they really did not like the man when he was alive. They are welcome to do so.

Here is a man, who never got a single vote, whether rigged or not, from the Nigerian people, but who hijacked the executive powers of the presidency. He held Nigeria and Nigerians to ransom since 2015. He rode roughshod over the people of this country. He appropriated all the appurtenances of power for his personal idiosyncrasies.

He was a perniciously greedy soul. He was remorseless in his ways. The 500 million naira bribe he took from the MTN was emblematic of his innate rapacity. It was emblematic of his bloated edacity. He appointed himself to the Board of Nigerian National Petroleum Corporation (NNPC). It was the first time in the history of Nigeria for an incumbent Chief of Staff. It was against the norm of decency and restraint. It was impunity at its worst.

Kyari relentlessly harassed the Vice President, licentiously anchoring Professor Osinbajo’s deliberate disempowerment.  He unabashedly intimidated the Ministers and prevented them from meaningful collaboration with the man who appointed them, or whom he helped to get appointed. With a mien akin to that of a dove, he was a heinous hawk, a vicious vulture that is egregious and atrocious in its debauchery and cupidity.

He was mindless and mean. He was cruel and cold. He was crude and callous. His greed was congenital. His insouciance encrypted his guiled mendacity. He was hung up on power hunkering. He had disdain for the rules. Like his principal, Buhari, he believed and acted above the law. His arrogance was horrifying. His condescension is sardonically sickening in the way and manner he exercised unmerited power. 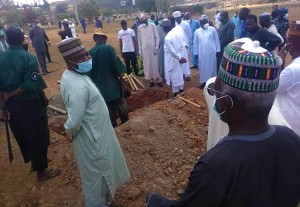 Abba Kyari reportedly died after he was transferred from Abuja to Lagos for the treatment for Covid 19 infection. He hails from Borno state in the Northeast, but his remains were buried in the capital city, Abuja.

Yes, the idea of not speaking ill of the dead is a VERY WRONG one, especially if that dead person never did anything to deserve it. If this practice was to continue, it means every criminal in our midst should look forward to being praised after he/she was dead regardless of the crimes committed. This would also mean a genuine disincentive for those who strive to do positive things and improve their communities.

It is very important to ensure that dead people’s memories be imbued with their acts of omissions and commissions when they were alive. It is an act of injustice to arrogate false achievements, fake qualities to monstrous figures more notorious for their kleptomania as they gallivant through the inner rooms of power.

Hopefully, when I die, people would have the unburnished courage to say exactly what they feel about me and not deodorize my omissions and imperfections. Hopefully, those who would feel the need to mourn me would not see the need to be hypocritical and dishonest in their elegies.

In all this, what became clearer is the vanity of vanity itself. It brought to the fore the cliché popularized by the Broadcasting Corporation of Oyo State in the early 1980s, “,,, vanity upon vanity, all is vanity”. It underscores the ephemeralness of not just power, but of all human things, except our deeds. This probably informed William Shakespeare’s ageless rumination captured in the   phrase, “The evil that men do lives after them.”

We should not praise villains when they are dead. It is a great disincentive to those who labored to be above board and did the right thing. You don’t have to agree with me. You don’t have to like me. Please, don’t like me, just respect the truth.