The Eleven Provinces of Biafra Ceased to Exist in 1970 & Thus, Can No Longer Be Reflected in Rising Sun rays of the Biafra Flag – Owhoko

The Scam in the Biafra-agitation Process

Where is the map of Biafra? This is the question I have often asked the promoters and sympathizers of the Biafra cause, and up till this moment, their responses have been feeble, vague, evasive and suspicious, failing to provide a specific drawing showing a clearly defined territorial area called Biafra.

Why is the map of a potential sovereign state like the Republic of Biafra not being courageously and freely displayed like the way the flag is presented? The recurring sight of the Biafra flag raises consciousness of it. Once Biafra is mentioned, a mental picture of the flag pops, showing the rising sun along with the eleven rays symbolizing the provinces in Biafra. But where is the map?

I am asking this question because of concerns being raised by neighbors sharing boundaries with the Southeast states to the South, specifically, the Niger Delta Region. The fears of the Niger Delta people stem from its minority status and experience in the first separatist agitation and the subsequent declaration of the former Eastern Region of Nigeria as an independent state of Biafra.

At the time, the present day, Akwa Ibom, Cross River, Rivers and Bayelsa states were part of the former Eastern Region while Delta and Edo states known as Midwest Region were captured by the Biafra forces and declared the Republic of Benin, even though, in their hearts, the region was part of Biafra despite the prevailing plural identities.

Indeed, this was the only reason why these states were sucked into the Biafra struggle without known prior consultation and consensus. However, to allay the fears of the minorities and reassure them that they were safe within the Biafra union, Late Lt-Col Chukwuemeka Odumegwu Ojukwu then appointed Late Major-General Philip Effiong, a minority from the present-day Akwa Ibom State, as second-in-command in the Biafra hierarchy.

The geopolitical setting of the country has since metamorphosed from the four-regional structure to six-geo-political grouping in consonant with ethnic, linguistics, cultural, historical, contiguous boundaries and affinity, leaving the Igbo in the Southeast geopolitical zone and, the minorities in the Southsouth or Niger Delta geopolitical area.

The present-day agitation for the sovereign state of Biafra, both the faction led by the Movement for the Sovereign State of Biafra (MOSSOB) and the Indigenous People Of Biafra (IPOB) and their leaders, have at different events, expressed that the Southsouth geo-political zone or Niger Delta region is part of Biafra. 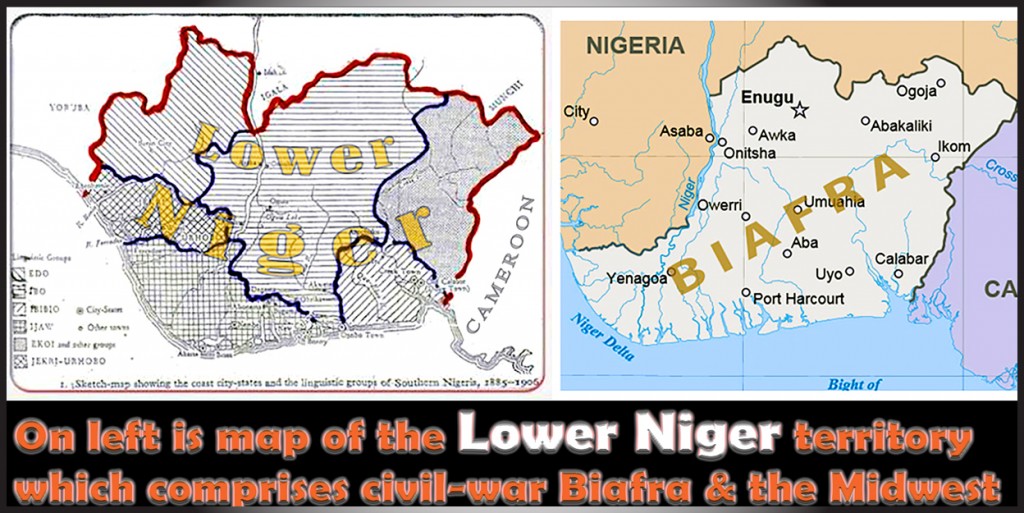 Map of the Lower Niger Territory compared with the map of civil-war Biafra. Minorities of the South inhabit the riverine parts of Eastern and Midwestern Nigeria.

This position is stripped of respect for minorities and a demonstration of might in the quest for territorial expansion. How do you conscript an unwilling people from another region to be part of your conceived independent state without prior discussions and agreement on the form, organization and modality of administration? Even if this is an effect of hallucination, how then can you be trusted?

It is this fear of domination and territorial ambition by the major ethnic groups that led to the setting up of the Willinks Commission in 1957 to look into the fears of the minorities who were scared of the imbalance of the three-regional political structure, and this led to the creation of the fourth region, the Midwest in 1963. By the body language, the Biafra gladiators are provoking a reenactment reminiscent of the old political structure.

Perhaps, the drivers of Biafra are still living in the past, unable to come to terms with the reality that the Niger Delta is now a different geopolitical area with its distinct political aspirations. Perhaps, they are being misled by the word, Biafra and, the symbol of the Biafra flag.

The name, Biafra, has its origin from the Bight of Biafra, now the Gulf of Guinea, a Portuguese name representing the West Coast from where waters flow into the Atlantic Ocean. Biafra still conjures a false sense of one region based on the old four-regional structure. The word, Biafra, no longer has geographical and historical relevance to the present Southeast geopolitical area, but the Southsouth geopolitical grouping.

The rising sun on the Biafra flag with the eleven rays representing the eleven provinces of Biafra under the old Eastern Region is also misleading. The Niger Delta region is no more part of the Southeast geopolitical zone. The moment the old four-regional structure was dismantled and replaced with the six-geopolitical zones, the eleven provinces ceased to exist. They, therefore, can no longer be reflected on the Biafra flag, particularly when previous political affinities had also been terminated.

Unfortunately, the continued use of the symbol on the flag creates a false sense of one region in the minds of the protagonists of Biafra with the eleven provinces. It is time to recreate the map; otherwise, it is a scam.

Under the current dispensation, each geopolitical zone has its distinct socio-economic and political aspirations, which are now at liberty to develop at their paces. This does not, however, exclude two or more geopolitical areas from forming an alliance in furtherance of their social, political and economic ambition, if they so wish, but this should be preceded and predicated upon a willful truce negotiated from a position of equality and respect for one another.

Governance is easy if one has nothing to hide. The process becomes complicated and confusing when there are hidden motives induced by entrenched interests and cover-up. Why are the drivers of the sovereign state of Biafra not making the Biafra map public and visible? We see the flag, but where is the map? Or is this a strategy to smuggle the Niger-Delta region through the backdoor into the Biafra dream?

As minorities, the Southsouth geo-political area also has a right to assert itself, particularly, in line with the United Nations Declaration on the Rights of Indigenous Peoples (UNDRIP) as adopted on September 13, 2007, within the context of their dignity, culture and survival as a people. Besides, the United Nations Charter in Article 1 also recognizes the right of people to self-determination for the realization of their cultural, economic, social and political dreams.

It was because of this that President Muhammadu Buhari, as a military Head of State in 1984, supported the aspirations and rights of the Sahrawi people for self-determination and independence despite the opposition of Morocco’s government. Buhari’s position then was based on the resolutions of the African Union (AU) on Western Sahara at the time.

The Niger Delta is no longer a kindergarten region. It has all the resources required to deliver on its responsibilities as an independent state if it so desires in line with the wishes of the people. Thus, the scramble for the region by other regions for purposes of annexation is an exercise in futility. If emerging development in the country makes separatist agitation inevitable in the future, the Niger Delta region can govern itself as an independent sovereign state.

It is the right of people to pursue their collective aspirations, particularly if they believe their common interest is being violated or endangered in a federation. The Biafra people have a right to pursue their dreams, but this should be done within the context of their territorial boundaries without any intention or ambition of annexing other regions or any part thereof as part of its geographical area. It is this element that makes the current agitation for the sovereign state of Biafra a scam.

Most countries that have attained independence today started with a struggle for self-determination, a process aimed at controlling their socio-economic and political destiny. Once a decision is reached among a people to form a state, implicitly, there must be a delineated territory agreed as a sovereign boundary, and a government capable of meeting the needs of the people that could also interface with other countries.

Once this is settled, the next natural thing to do is to draw up a map depicting the proposed independent territory, even before a flag and other paraphernalia are developed.  This has been the trend in the struggle for self-determination. Apart from sensitization, the map and the flag are used as symbols of appeal to shape and drive sentiments and collective aspirations of the people.

This same process was adopted by countries that had gained independence and those that are still in the trenches for independence. Thus, from Scotland to Catalonia, from Hong Kong to Siberia, from Tibet to Luhansk and from Crimea to Quebec, this is the pattern and trend.

Biafra needs to review its strategies and restore confidence among neighboring boundaries; otherwise, a case of territorial ambition and annexation are implied, a discernment that is capable of thwarting and rendering its efforts unfeasible.

Owhoko is a journalist, author and public relations consultant.