The Igbo Landing Story: Mass Suicide by Drowning Preferred Than Being Enslaved in America

There must be something to the many historical narratives that have portrayed the Igbo as intrinsically hardwired to reject subjugation, the worst variant of which is enslavement by fellow humans. Slavery was alien to the indigenous Igbo culture and worldview until arrival of West Europeans in the 14th Century AD to the West African Coast. Early interactions between Portuguese seafarers in inhabitants of West African coastal region were mostly predicated on trade in goods. Discovery of the Americas slowly transmogrified trade in commodities into the more lucrative business of trans-Atlantic shipping of slaves from Western Africa to work in the burgeoning industrial-scale agriculture business in colonial America which demanded a lot of cheap human labor to be profitable.

The triangular maritime trade routes that linked Africa to Europe, Europe to America and Africa to America functioned as the focus of global trade. Cheap consumer goods, arms and ammunition were shipped to West Africa by European slave runners in exchange for slaves who were then sent across the Atlantic Ocean in a very hazardous journey in which as much as one out of every three of the human cargo perished before arriving the Americas. Between 1525 and 1866, in the entire history of the slave trade to the New World, according to the Trans-Atlantic Slave Trade Database, 12.5 million Africans were shipped to the New World. 10.7 million survived the dreaded Middle Passage (trans-Atlantic shipment), disembarking in North America, the Caribbean and South America.

Cheap labor derived from enslavement of Africans laid the foundation for the global economic superpower that the United States has become today. Outset of the Industrial Revolution in Europe and North America helped in proving that reliance on machines and mechanized production was more profitable than continued dependence on unskilled manpower that was becoming increasingly difficult to extract from the vastly depopulated African continent. This realization, as one would imagine, coincided with the period of gain in the popularity of anti-slavery campaign in Europe and later, in the Americas too.

The incident that led to the Igbo Landing Story took place in 1803 at a period when anti-slavery movement had begun to gather momentum in Europe. Slavery was abolished in England only 30 years later on August 1, 1833. Slavery debate resulted in the American Civil War before an Act of US Congress supposedly ended the practice on December 6, 1865. The Igbo Landing Story is based on slave culture which had thrived in America for three centuries. If one looked African anywhere within America in 1803, chances are that one would ordinarily be considered to be a slave. It was, therefore, irrelevant that the 18 Igbo men, who had hitchhiked to the New World on the ship that landed at Dunbar Creek in 1803, were not purchased as slaves before they left their ancestral homes in Africa. Once the Black African Igbo men landed on American soil, they were informed about the plan to take them to the slave auction market nestled along the northern tip of Simons Island in the state of Georgia.

When the reality of their impending calamity dawned on them, the 18 Igbo men arrived at a decision that came to them naturally. Human enslavement is antithetical to everything that defines the Igbo culturally and existentially. Though large in numerical strength, the Igbo worldview abhorred war making for sake of conquest, subjugation of others and empire building at the expense of fellow humans. If the ancestral Igbo found the notion of enslaving others to revulsive, it can only be imagined how a freeborn would feel to learn that he was automatically being reclassified into becoming a slave. This must have been unnerving since they felt betrayed by the ship operators who tricked them into embarking on the supposed courtesy free ride across the Atlantic to seek greener pastures in the US. 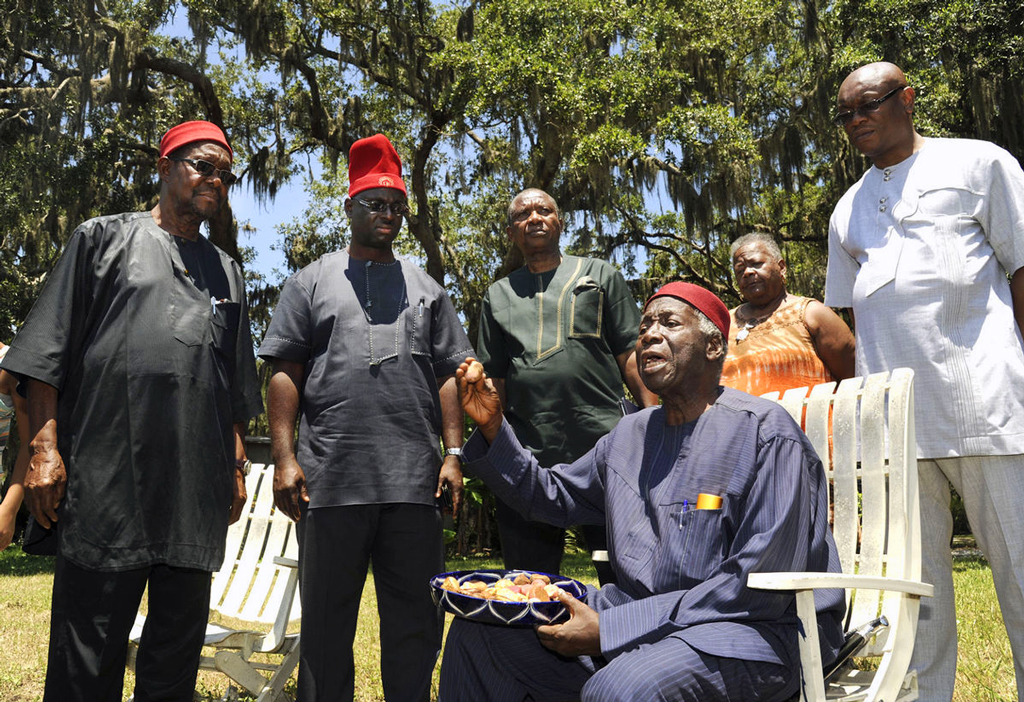 Dr. Dozie Ikedife (seated) & other Igbo sociocultural leaders make a special trip to Igbo Landing at Simons Island, Georgia where they broke the colanut to invoke and commune with spirits of 18 Igbo men who drowned in Dunbar Creek nearby in 1803 so as to escape enslavement.

Faced with the dialectical choices of submitting themselves to perpetual enslavement or the preservation of their cultural pride and honor as free men, the 18 Igbo men who had disembarked at Dunbar Creek, Georgia in 1803 took the latter. The exact sequence of actions taken by these determined men of honor is stil uncertain. But the incontrovertible fact was that the Igbo would-be slaves escaped into the nearby marshland and worked their way into the body of water called the Dunbar Creek in which the majority of them drowned. Bodies of the deceased were subsequently recovered in the coastal waters offshore. Some versions include that the few who did not perish were later captured by bounty hunters who collected $100 per head for their effort.

The Igbo romance with freedom and justice is nothing new neither is it a phenomenon acquired from external influences imported from elsewhere beside Alaigbo (ground zero). Historical figures such as Olaudah Equiano, Paul Robeson, Sojourner Truth, Marcus Garvey and others, who traced their ancestry to the Igbo cultural group in Southeast Nigeria, were leaders of consequence in the global movement to consign the injustice of human enslavement to the dustbin of history. It is also noteworthy that it was only a year after the Igbo Landing incident that the Black African population of Haiti rode up in an insurrection, defeated their French masters and owners and declared the Caribbean island’s independence. It is a well-known fact that preponderance of the slaves imported into Haiti were of the Igbo ethnic stock.

The Igbo worldview and cultural history have no tolerance or accommodation, whatsoever, for human enslavement which is still deemed to be the worst of man’s injustice to fellow man. The Igbo is instinctively hardwired to reject enslavement by fellow humans. As the Igbo Landing Story has shown, the Igbo may be vulnerable to being fooled and can indeed be tricked into the status of slavery without the victims being aware of the grand scheme. But whenever the fog clears and the Igbo perceive themselves to be slaves or serving in such a role, the subsequent choice of action for them has been obvious since antiquity. It is honorable to die struggling to live free than to opt to live a long life of enslavement.

The African American spiritual that goes thus; “Before I’ll be a slave, I’d be buried in my grave….” is quintessentially Igbo. Can someone, please, communicate this message to Muhammadu Buhari and his fellow Sokoto Islamic Caliphate scions in the Arewa North, who believe that the grand scheme to occupy Alaigbo and enslave the Igbo ethnic nationality in perpetuity is what the future portends, that history is definitely not on their side.