Warning: implode(): Invalid arguments passed in /home/lncusa5/public_html/wp-content/plugins/cj-membership-modules/options/cjfm_customize_emails_variables.php on line 66
 The Ikenga Spirit Dwells Within Every Igbo, Irrespective of Whether One Is Conscious of This Fact or Not – Jeff Unaegbu – Lower Niger Congress – USA Skip to content

The Ikenga Spirit Dwells Within Every Igbo, Irrespective of Whether One Is Conscious of This Fact or Not – Jeff Unaegbu

Ikenga: The Mighty Secret of the Igbo

The secret of the Igbo is the Ikenga. The Ikenga is the spirit of individualism, industry, progress and self-determination or independence. In the past, many Igbo men had a personal god called the Ikenga. It was a ram-horned wooden effigy which many Igbo men communed with before they set out for the day’s work. It was the spirit of Ikenga that led the Igbo man in his decisions throughout his life. It was the Ikenga that pushed the Igbo man to move beyond his confines out into the wide world with the sole aim of conquering and mastering anywhere he found himself.

Throughout the seventeenth and eighteenth century, the only ethnic group in Black Africa which the white slave masters were very uncomfortable with was the Igbo. Having Igbo slaves was like pouring water in a basket. The Igbo slaves almost always rebelled against their white masters. They would jump out of the ships transporting them across the Atlantic Ocean. They would quickly master the way the white man turned the keys to remove their chains and bring them out to the deck to get some sunshine. While getting sunlight, they would kill the white men, free themselves and try to escape the vastness of the ocean, save for the retorting maxim guns of dangerous pirate ships looking for such loose, wandering and rudderless ships.

Artistic depiction of 18 Igbo men walk in Dunbar Creek, Georgia to their deaths in 1803 in order to escape enslavement.

Igbo slaves were brought to Savannah, Georgia to be auctioned off as slaves. Two families from St. Simons Island, Georgia, purchased these slaves and had them shipped to the Island on a ship named Morovia. The Igbo slaves rebelled. The captain’s own slave was the first to commit suicide by drowning in Dunbar Creek. Then an Igbo chief who had been captured into slavery along with others began to chant, “The Sea brought me and the Sea will bring me home”. There was no questioning the chief’s decisions. Other Igbo slaves began to chant together, “Omambala kamu jiri bia, omambala kamu ga eji la”. Chained one to the other, they came into port and were led toward the dock. But, instead of walking onto the bank into a life of slavery, they all turned and followed their chief into the depths of Dunbar Creek and about 75 of them got drowned.  The place is called “Eboe Landing (Igbo Landing)” to this day.

The only country full of Black slaves that rebelled successfully was Haiti. The Black slaves in this country chased out all the White slave masters, killing many of them. The ethnic group that organized and strategically led the revolt was the Igbo. In fact, today, Igbo songs and culture is felt everywhere in Haiti. There is a Haitian song popular in Haiti today. It goes: Igbo Granmoun O (The Igbos are their own authority), lakay Igbo (In the land of Igbos), Igbo Granmoun O (The Ibos are their own authority). “Lakay Igbo” seemed to be corrupted from “ala nke Igbo”. So resentful were the Igbo people of taking orders that Igbo slaves in Haiti and throughout the Americas had a higher suicide rate than other Africans. Many Igbo slaves bought their freedom and became very well respected in America and elsewhere. Sometimes, if they did not succeed, their direct children did and became known worldwide. (More on Igbo Granmoun https://bit.ly/2XFYGqb).

I hope you have heard of names like Olaudah Equiano (first Black African former slave to have written and published an autobiography in modern print in 1789, regarded as the true beginning of modern African literature), Africanus Horton (father of modern African political thought and the first modern African political thinker to openly campaign for self-government for the West African colonies in the 1860s!), Edward Wilmot Blyden (regarded widely as the “father of Pan-Africanism” and one of the first people to articulate a notion of “African Personality” and the uniqueness of “African race” in the 1880s)? Did you notice the fire of self-determination in these people I mentioned? The Ikenga is that powerful. 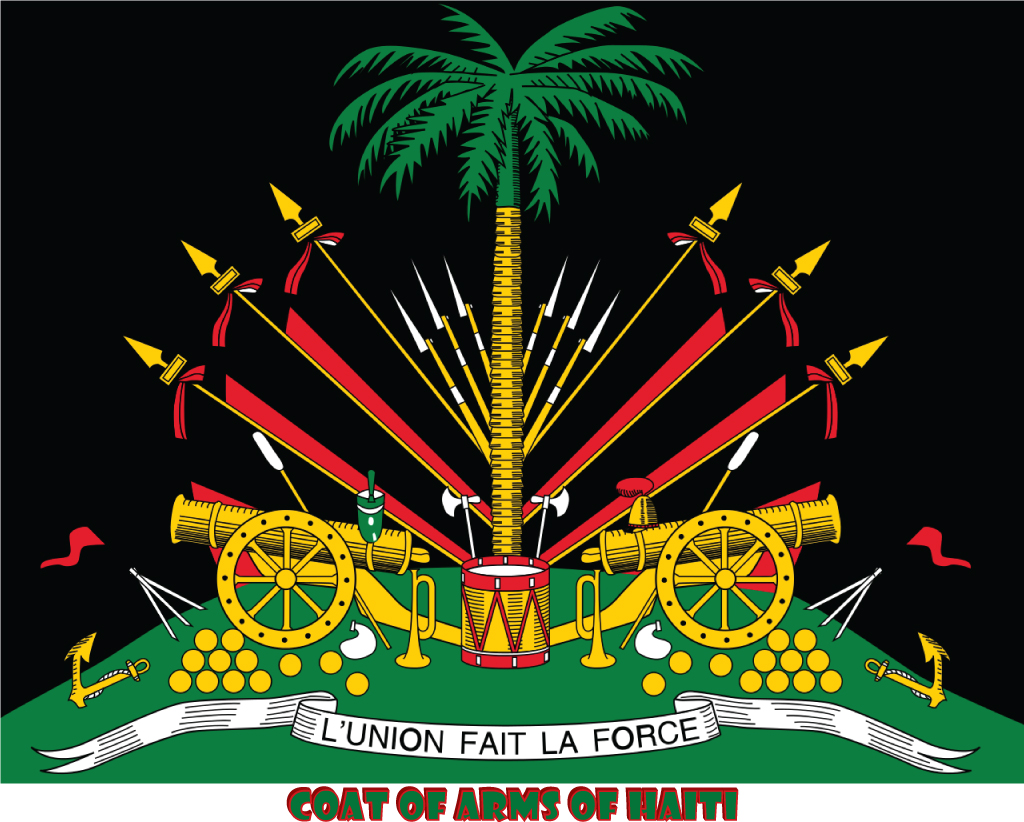 Coat of arms of Republic of Haiti featuring the oil-palm tree.

By 1857, the slave trade was already being crushed by the British Slave Trade Act of 1807. In 1857, the ship, Dayspring, anchored at Onitsha. Onboard was Dr. Baikie (whose name is now synonymous with any white man in the view of the average Igbo). With him were Reverend Samuel Ajayi Crowther (a freed Yoruba slave) and Reverend J.C. Taylor (a freed Igbo slave). With them was a group of catechists. The seed of western education was brought to Igbo land that year by these people. In fact, Reverend Taylor was left behind to teach the indigenous Igbo the mystery of western education. By this time, many indigenous Yoruba people had gone deeper into western education, far more than the indigenous Igbo. This is because of the early encounter of the indigenous Yoruba with western education through the coast of Lagos, where many white people and freed slaves from all over the world flourished. While the indigenous Igbo were still learning the mystery of education, the Yoruba had their first graduate in 1875 (Dr. Nathaniel King). The British were not comfortable with finding so many educated Yoruba in Lagos at this time.

Well, not long after the indigenous Igbo came into contact with western education, they became so enamored of it that the Ikenga led them to have an unimaginable grasp of it.  The sudden accelerated rise of the Igbo in their acquisition of western education was shuddering. Coming late to western education (the first graduate was Dr. Nnamdi Azikiwe in 1930), they soon overtook the Ibibio and nearly the Yoruba. This baffled the Yoruba and irked the Hausa. The Igbo were inclined toward American horizontal education. With scholarships won by Zik for Nwafor Orizu and the other seven “Argonauts”, a new era began. Dr. Orizu was later to win 431 American scholarships, which he did not limit to his Igbo people but gave to any ready African student.  The American type of education the Igbo was acquiring made the Colonial British very displeased. But the seed had been sown. The Ikenga was boiling for more of the new knowledge.

By the late 1930s, according to Schwartz, there were more Igbos than Yorubas at most of the important Nigerian schools. It followed that the Igbo competed for jobs that the Yorubas had held exclusively for over three decades. The Yoruba began to express fears of Igbo domination. By 1948, the resentment was palpable. In the words of Mariam Ikejiani-Clark, “It was this contending situation between the Yorubas and the Igbo which led to ethnic hostility and distrust amongst them that made it very difficult eventually for the two parties to form a coalition government at the federal level”.   Although academic environments were cosmopolitan, academic Yoruba was still not at ease with the newly educated Igbo. Shortly before Independence, an Igbo, Prof. Kenneth Dike, was appointed Vice-Principal of the University College, Ibadan, then Principal of the University College, and later, after Independence, he became the first indigenous Vice-Chancellor of the University of Ibadan. Another Igbo, Prof. Eni Njoku, became Vice-Chancellor of the University of Lagos. The political tension in Nigeria in the early 1960s brought ethnic sentiments to the fore and some Yoruba devised an intrigue and edged out Njoku, who returned to the east to head the University of Nigeria, Nsukka. Prof. Kenneth Dike was fed up too with misinterpretations of his sincere motives in his leadership style. After a tiresome court case with the Registrar of the University, he took an accumulated leave and by the time he was due to return, it was no longer save for an Igbo at Ibadan. He moved to the east with his family.

The Ikenga had also begun to boil for the independence of Nigeria. The Igbo made up a dominant part of the pioneer renowned nationalists who fought for the independence of Nigeria from Britain. The role of Dr. Nnamdi Azikiwe from 1937 to 1960 is well documented in history.  Aside from Herbert Macaulay, who was limited to Lagos, except for 1947, Azikiwe was indisputably the frontman in the fight for independence on a nationwide scale. The other well-known nationalists were Mazi Mbonu Ojike (he published three books within three years while studying in America), Dr. A.A. Nwafor Orizu, Kingsley Mbadiwe (moved a motion in parliament that led to the establishment of the Central Bank of Nigeria), Oged Macaulay, Mallam Habib Raji Abdalla, Osita Agwuna, Mokwugwo Okoye, Chief MCK Ajuluchukwu, Chief Fred Anyiam, Chief Mbazulike Iwuchukwu Amaechi, Increase Coker, Ebun Adesioye, Mr. A. J. Marinho, Green Mbadiwe, Eni Njoku, Alhaji S.O. Gbadamosi, H.O. Davies, Bode Thomas, A.K. Blankson, Kola Balogun, Abiodun Aloba, Harry Nwana, Wogu Ananaba, Ikenna Nzimiro, Za’ad Zungur, Okechukwu Ikejiani, Jack Seaboy, T. O. S. Benson, Hon. Timothy Naakuru Paul Birabi, Chief Dennis Osadebay,  and Michael Okpara. What I want to show is obvious. Most of them were of the Zikist Movement. The secret was the Ikenga.

When independence arrived, the Igbos took over many civil jobs in the North. This created resentment and indirectly led to repeated killings of the Igbo by the Hausa in the North. It was the spirit of Ikenga that led the Igbo to flourish in places that were not their homeland. This brought them trouble…

Dr. Nnamdi Azikiwe was a co-founder of the Nigerian nation, which attained self-rule from Britain in 1960. He was the country’s first ceremonial Head of State.

The real reason for the Nigerian Civil War, which was fought between the Igbo and the rest of Nigeria from 1967-1970, was the irrepressible spirit of the Igbo. The average Igbo leader is not comfortable playing second fiddle in any political structure. This character in Azikiwe brought him confrontations with others. This character in Ojukwu (first graduate in the Nigerian Army) made him uncomfortable to accept authority from Gowon, whom he considered his junior. This character contributed to the Biafran secession…

After the war, these efforts led to the establishment of PRODA.

After the war also, most of the Igbo were given twenty pounds each in lieu of what they deposited in the banks before the onset of open hostilities. Within ten years, many of them became millionaires again! Ikenga….

NB: Please, pardon any appearance of ethnocentrism in this write-up.