The Islamic Movement of Nigeria (IMN), Headed by El-Zakzaky, Doesn’t Represent Islam or Muslims in Any Way – says Sunni leader

The Secret of Shiites Sect

Whether the Nigerian military was right or wrong in forcefully repelling the Shia in the recent crisis was not a major concern to most Muslims. They see the defeat of Shi’a as a victory for them because of the rage they harbor for the Shi’a.

Dr. Abdussamad Umar Jibia, (Associate Professor and Head of Mechatronics Engineering Department, Bayero University) had recently said among others in his letter to President Buhari thus:

“…As a Muslim, you don’t need someone to tell you about Shia. But for the benefit of those who do not know, I would say the little they need to know. Shia is about the oldest sect in Islam. After the death of Muhammad (peace be upon him) who was both a messenger of Allah and a political leader, the Islamic faith continued to grow under the rightly guided Caliphs. It was during this period that the present-day Syria, Iran, Iraq, Egypt and Palestine came under the control of Islam.

However, the Jews who were expelled from the city of Madina by the Holy prophet because of their treachery and were watching these developments with agony decided to react by sponsoring some of them to pronounce Islam in order to have the license to cause confusion among Muslims. It was these ‘converts’ under the leadership of one Abdullah bn Saba that succeeded in sponsoring the rebellion against the third Caliph, Othman. They first articulated his shortcomings, amplified and disseminated them around the Caliphate. Thereafter, they called for his resignation; when he refused to resign, they killed him. The Muslim Ummah chose Ali, a cousin of the Holy Prophet to lead them after Othman, but these very people, who now called themselves Shiat Ali (the sect of Ali) frustrated his efforts to track and punish the killers of Othman. They now made Shia a symbol of love for Ali and other relations of the prophet and hatred for the other caliphs and the rest of the prophet’s companions whom they claimed betrayed the trust of the prophet.

Shia was embraced by Persians because they saw it as an opportunity to distort a religion that destroyed their kingdom and culture. After the Iranian revolution, which was led by Shiite scholars, the government of Iran set an agenda to spread Shia to other countries. In Nigeria, this task was to be carried out by one Ibrahim Yakub El Zakzaky. The man Elzakzaky devised several strategies to achieve his mission. First, he banked on the gullibility of some Muslim youth who could easily be misled by slogans like ‘Islamic revolution’, ‘establishment of Islamic state’, ‘total change’, etc. His group, who initially tagged themselves as Muslim brothers (meaning, of course, that other Muslims are not their brothers) organized lectures and several demonstrations in their first phase. In those days in the 1980s, he told everyone that he was not a Shiite, his group was not out to promote Shia and that what they wanted was Islam and nothing else.

The other methods used by Elzakzaky to introduce Shia to his followers were the same methods that Shiites have used over their long history. One of them is women. Shiites legalize temporary marriage. In Shia, it is possible to marry a woman for two hours. Many people find it difficult to understand why young men and women who are supposed to be in school would trek from cities like Kano, Gusau and Katsina to Zaria, spending nights along the way in order to listen to El Zakzaky. This is the secret. It is an open one because the Shiites do not deny they do it. What they may deny is wife swapping, which many people accuse them of doing.

There is plenty more on Shiites and their doctrine…”

If you study the Qur’an adequately, you will certainly see that Islam and Shia are a word and its opposite.

They cannot be Muslim those who harm the Prophet Muhammad by slandering his wives and calumniating his closest friends and companions. Their goal is to make us doubt Islam which got to us through the companions of the Prophet (Q48:29, Q9:100&117).

They cannot be Muslim those who sow doctrinal differences among the Muslims in order to set them against each other (Q9:107).

They cannot be Muslim those whose fundamental belief is that the Qur’an has been corrupted despite that Allah says corruption can never make way to it (Q41:41-42, Q15:9).

They cannot be Muslim those who are hostile to our direction in Salat and the cradle of Islam (Makkah, then Madina – Arabia). (Q22:25)

They cannot be Muslim those whose faith is based on Hate, Lie and Curse while Islam preaches Love, Honesty and Forgiveness (Q3:133-6). 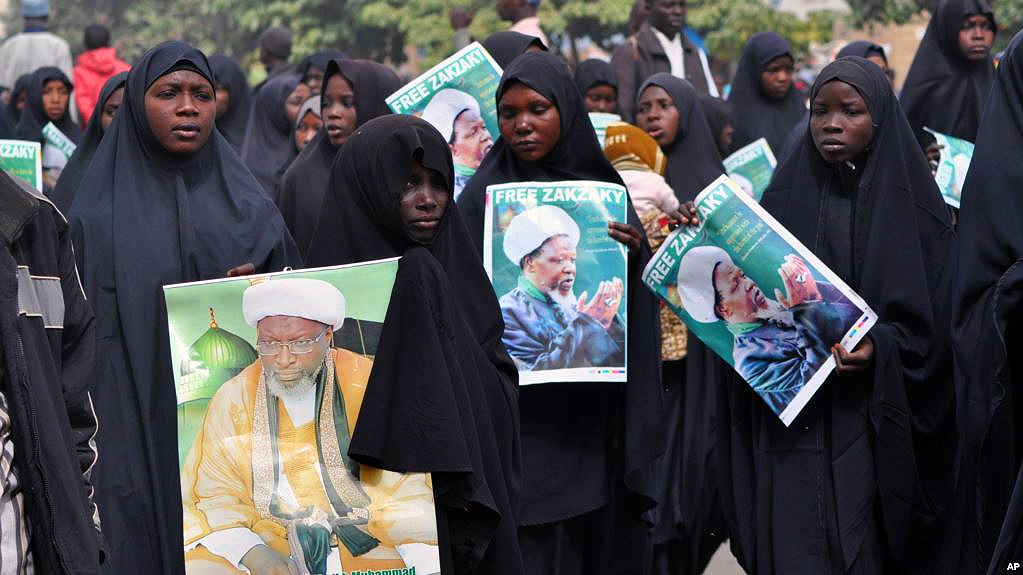 Muslim Women clad in hijab rally to show solidarity for the leader of the imprisoned leader of Shia sect, Sheikh Zakzaky. He has been under extrajudicial detention by the Sunni-led Buhari administration.

They cannot be Muslim those who brazenly call to polytheism while the foundation of Islam is Monotheism (Tawheed – Laa ilaaha illallah).

They cannot be Muslim those who believe that all non-Shiite Muslims (Including Abubakr and Umar) are worse than the Jews and Christians (Q4:49-52).

They cannot be Muslim those whose beliefs and acts of worship are completely different from that of the Prophet Muhammad (Q42:21, Q24:47).

They cannot be Muslim those who are openly and secretly destroying Muslim governments and society (Q2:11-16).

Closely study the traditions of the Prophet Muhammad on Dajjal and you’ll realize that most of his followers will be the Shia and the Jews. After all, the Prophet said Dajjal will appear from Isfahan which is a city in Iran (Persian)! Here you understand why it is Iran which is most pained by what happened to the Nigerian Shiites recently.

A struggle with hand, tongue, wealth or self to destroy the religion known as Shia is a real contemporary Jihad.

The Islamic Movement of Nigeria (IMN), headed by El-Zakzaky, is a misnomer; it doesn’t represent Islam or Muslims in any way.

Every true Muslim must rise to defend prophetic Islam and preserve our heritage. We should seriously learn the Qur’an and the Sunnah (Q9:73-74).

May Allah protect us!!?