THE DISTRESSED “FEDERATION” OF NIGERIA, THE REPUDIATED 1999 CONSTITUTION AND THE IMPERATIVE OF A PEOPLES’ COUNTERMAND TO A PERILOUS ELECTORAL VOYAGE.

(Being A Joint Proclamation Made on Behalf of the Peoples of Southern and Middle Belt Territories of Nigeria Proposing the Deferment of the 2019 Elections and the Immediate Undertaking of the Reconfiguration of the Damaged Constitutional Foundations of Nigeria – presented at a world press conference the 11th day of December 2018 in Lagos.)

Having watched in absolute horror like trapped passengers aboard rudderless the Ship of the Nigerian State sailing into deeper troubled waters, by way of plunging heedlessly into further National Elections in 2019 under the thoroughly Disputed 1999 Constitution, We the Undersigned, on behalf of the Regional Self-Determination Initiatives across the Southern and Middle Belt Territories of Nigeria, Cooperating under the aegis of  the NIGERIAN INDIGENOUS NATIONALITIES ALLIANCE FOR SELF-DETERMINATION (hereinafter “the Alliance”), wish to Posit as follows:

(I) That the history of the colonial beginnings of Nigeria as a British business enterprise is too well-known to bear any further repetitions and so, it would suffice to remind us that Nigeria was not the consensual project of its constituent component nationalities and that, four decades into the Lugardian experiment of 1914, the legional Leaders of the forcefully amalgamated territories had no faith, whatsoever, in the artificial political union into which their various peoples have been locked by the British and so, while Alhaji Ahmadu Bello as the Premier of the Northern Region lamented the British-imposed union as “The Mistake of 1914”, Chief Obafemi Awolowo had dismissed same Nigeria as “A Mere Geographical Expression”.

(II) Recently declassified secret colonial records now confirm the heavy manipulations by the British to create a lopsided union in which what was packaged as “Independence” in 1960 was, for the Southern and Middle Belt Nigeria, merely a transition from external British colonialism to internal caliphate colonialism, portraying Nigeria progressively as a British/Sokoto Caliphate joint venture – holding the South and Middle Belt territories and their indigenous peoples in servitude. On this note, it is instructive to recall the December 1913 description by the then Secretary for the Colonies, Lord Harcourt, of the impending January 1st, 1914 illicit annexation of Southern Nigeria to Northern Nigeria, as the British marrying off the Southern lady of means to the poor but well-conducted Northern youth and to point out that it was the celebration of this grand bequest that Ahmadu Bello had declared to his lieutenants in the very week of “Independence” in October 1960 that – “The new nation Nigeria should be an estate of our great-grandfather, Uthman Dan Fodio. We must ruthlessly prevent a change of power; we use the minorities of the Middle Belt as willing tools and the South as a conquered territory, and never to allow them to rule over us, and never allow them to have control over their future”. (Parrot Newspaper, 12th October 1960) 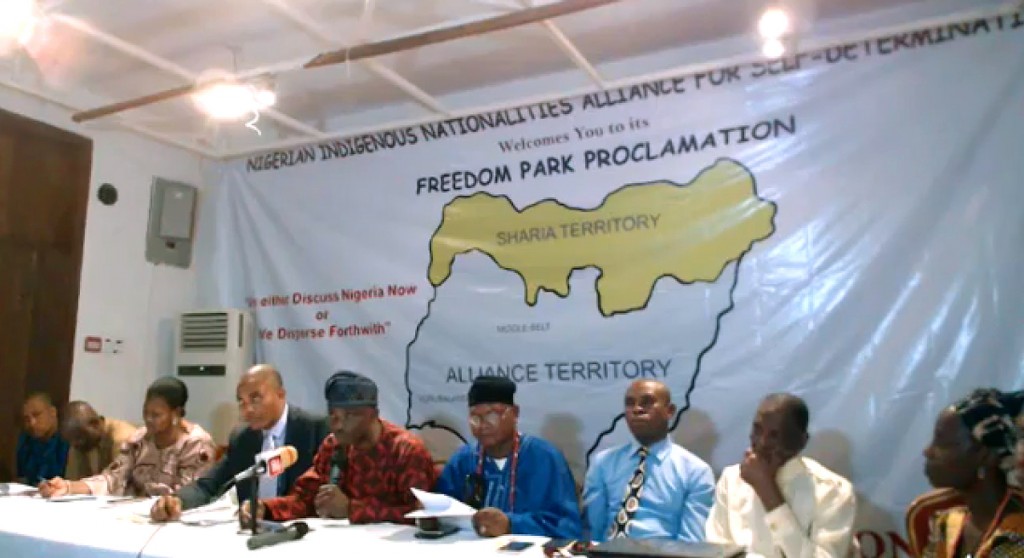 The NINAS Proclamation statement being read by the Yolicom Spokesman, George Akinola, at the Freedom Park venue.

(III) We recall that as the departure of the British drew near in the early 1950s, the ethnolinguistic, cultural and religious diversities of the peoples of the territory dictated the adoption of a federal constitutional model in which the then 3 largely  autonomous regions (Northern, Eastern and Western Regions) owned and controlled their assets, contributing an agreed percentages of their income (15%) to finance  the upkeep and operations of the center (Federal Government) in the limited function jointly delegated to it by the federating regions and it is pertinent to note that the high degree of autonomy which defined this federation model resulted from the 8-point demand raised by Sir Ahmadu Bello, Premier of the Northern Region, following the Northern opposition to, and resultant defeat of the 1953 Independence Motion moved by Chief Anthony Enahoro.

(IV) The military coups of 1966 truncated the aforementioned federation model, toppling and jettisoning  the 5 constitutions which defined the Federation of Nigeria (4 Regional and 1 Federal), imposing instead a Unitary system in which the center (federal), masquerading as “the Federal Government” forcefully seized, confiscated, and become the owners of the assets and sovereign rights of the regions (fractured first into 12 States in 1967 and subsequently to the present 36 states which grovel at the feet of an omnipotent “Federal Government, with a 68-Item Federal  Exclusive Legislative List that render the states completely incapacitated).

(V) It is self-evident that this inverted federalism is directly responsible for the globally acknowledged failings of Nigeria in all spheres, manifesting in pervasive corruption, decayed infrastructure, gross insecurity, mass poverty and hopelessness, thrusting Nigeria upon the global podium as the case study of a failed state. It is also self-evident that the many regional agitations in Nigeria today, whether for resource control, exit from the failed Nigerian union or for regional autonomy, are basically constituents’ responses to Nigeria’s inverted and distorted federalism and therefore raise sovereignty questions that mere elections cannot answer.

(VI) That from the point of the collapse of the federating constitutions in 1966, Nigeria ceased to be a federation and that the Unitarist country imposed by a combination of brute force and guile since 1966 has become, for the constituent component ethnic nationalities of Nigeria, an occupation force operating as an adverse suzerainty in negation and suppression of the collective sovereignties of the said constituent component nationalities which now feel entrapped in the union of attrition and death that Nigeria has become for their various peoples, especially in the Southern and Middle Belt territories which had been at the receiving end of the belligerence of a section of Nigeria which owes it a sacred duty of faith (Sharia) to kill others and which does not believe that all men are born equal (feudalism).

(VII) The simultaneous imposition of Sharia by the 12 contiguous states of the feudal section of Northern Nigeria in the year 2000, rendered the already distressed union of Nigeria practically untenable since Sharia and feudalism are both antithetical to the democracy and constitutionalism to which the rest of Nigeria subscribes. So, it became a situation an irreconcilable clash of civilizations with little prospects of finding any viable sustainable resolution as no side can be compelled or persuaded to abandon their worldview.

(VIII) That the present imposed master-servant constitutional order that emanated from the series of decrees made between 1966 and 1999 which birthed both the so-called “1979 Constitution” and its 1999 reincarnation called “the 1999 Constitution” that currently defines the union of Nigeria cannot be the basis of any democracy for the same reasons that no democracy could have been built on the South African Apartheid Constitution.

(IX) That many years of painstaking people-led democratic processes, including PRONACO and other multi-regional initiatives, to find a sustainable resolution to the damaged constitutional foundation of Nigeria had been ignored and denigrated by successive central government administrations, including the present one when, in faraway Paris, President Buhari recently declared that those talking about Restructuring were lazy and without a clue on what they mean by Restructuring and how it could be undertaken. A comprehensive response proferring the meaning, contents and process of Restructuring was raised by an alliance partner organization titled: “OPEN MEMORANDUM TO PRESIDENT MUHAMMADU BUHARI ON HIS PARIS QUERIES ON RESTRUCTURING” (See link: https://www.facebook.com/618603708275794/posts/1406123622857128/). We adopt and incorporate the full text of the said open memo of November 16, 2018 as the wider articulation of the issues around the demand for the reconfiguration of the constitutional foundation of Nigeria. 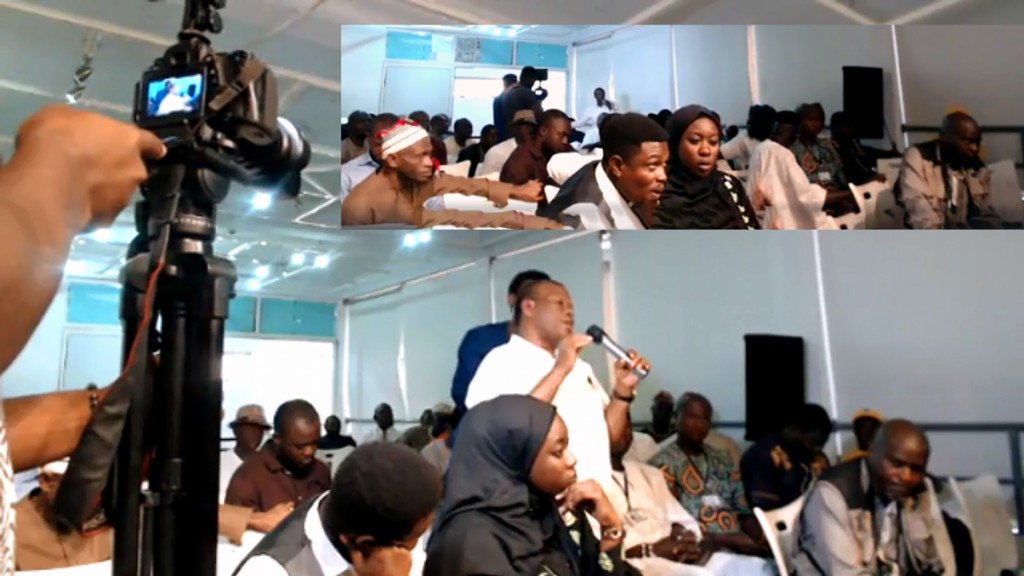 The press, delegates from convening groups and technical crew interacted with the empaneled leaders at the table during the press conference.

(X) It is also a matter of public knowledge that, as a part of the aforementioned people-led processes, the component regional blocs of Nigeria throughout Southern Nigeria and the Middle Belt had, in course of the last 3 years, taken their turns to publicly repudiate the 1999 Constitution as the basis of the Nigerian union and the next logical step is to initiate a time-bound process for the termination of the operation of that constitution.

It Is Our Contention

That the most urgent challenge before Nigeria today is to reconstitute itself back to being a federation as the only viable mechanism for addressing the Self-determination and sovereignty issues raised by the thoroughly disputed constitutional arrangements of Nigeria; NOT ELECTIONS which can only exacerbate an already bad situation. The current dangerous crossfire between the partisan gladiators and the trajectory of the political discourse in Nigeria is reminiscent of the 1962 to 1965 episodes which exploded into the collapse of the union in 1966.

We demand that, in place of the general elections planned for 2019, a Transitional Government should immediately be instituted to peacefully ease out the rejected Unitary constitutional order while a new body with constituent powers is also instituted to midwife the emergence of successor constitutional arrangements according to the preferences of the constituent component nationalities of Nigeria to be ascertained through Referendums.

May we inform the political actors from the South and the Middle Belt of Nigeria that a choice must be made now between standing with the people they claim to lead and represent who have rejected the 1999 Constitution and any elections mandated by it and thus standing with the enemies of their own people who insist on preserving that master-servant 1999 constitution which enslaves and impoverishes the populace.