Brandishing their AK47 rifles, elements of the Fulani herdsmen militia, in compliance to orders from their Miyetti Allah sponsor, succeeded in blocking the convoy of heavily loaded trailer trucks hauling fresh farm produce to the more populated and urbanized Southern Nigeria. The loaded trucks were forced to turn around and return to their places of origin in the Middle Belt that the Fulani irredentists still prefer to regard as part and part of the Sokoto Islamic caliphate of the precolonial era. The Fulani herdsmen militia took the order to blockage the shipment of fresh agricultural produce to the South as a form of punishment for the indigenous peoples and residents of the Southwest by their well-known sponsor, Miyetti Allah Kautal Hore headed by Alhaji Bodejo.

.The inability of local farmers to ship out fresh agricultural produce on schedule caused instant crises in the farm country up North. Perishable vegetables like tomatoes have a very short shelf life and facilities for refrigeration are nonexistent in the country. The unplanned blockade of all shipments of produce to the more lucrative Southern markets resulted in a glut in the local markets where prices plummeted overnight. Even commodities with longer shelf life like beans, potatoes and yam tubers fared no better. 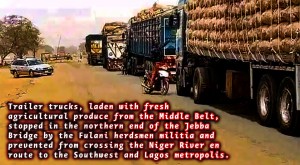 Gun-toting Fulani herdsmen militia succeeded in blocking heavily laden trailer trucks from crossing the Jebba Bridge en route to Southern Nigeria. Produce was returned to the farms and a glut in local supply caused a collapse in prices.

The following was culled from regional and national media on the emergent economic conundrum:

— In Kano: farmers went to the extent of unsuccessfully trying to use the airport to move food products down to the South. [Nairaland] 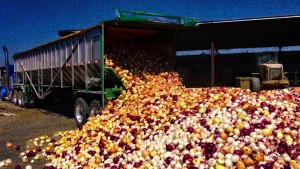 Fresh farm produce blocked from the large Southern markets was returned and dumped in makeshift warehouses that are unsuitable for the preservation of fresh foodstuffs. Massive losses were incurred as the market-bound produce was instead allowed to perish unsold.

—In Abuja: the DSS was inviting herders to settle the issue (DailyTrust)

— On some media, millions were lost to food transported to other countries from Northern Nigeria.

In the end, the Northerners (Fulani) who singlehandedly declared the blockade, called it off.

They gloriously lost the war!!