The Mystery of Ọfọ Tree in Igbo Cosmology

Have you ever wondered why there are such names as

Ọfọ is a tree in Igboland, the botanical name of which I don’t know. Like many African tribes, the Igbo man is a pantheist, sort of. He believes that God is everywhere and can reveal His (although God has no gender in Igbo mythology) presence wherever [He] is called upon for worship. The indigenous Igbo man also believed that nature, in its own way, is an embodiment of the divine presence. For instance, there are some trees, caves, springs etc known to have an embodiment of spiritual essence usually consulted by man for his basic supernatural needs. 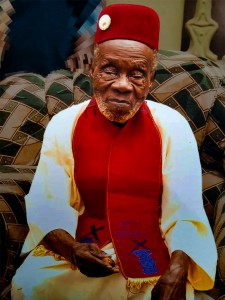 Let me illustrate. There is a cave in the present Nkalẹgụ Ọbụkpa called Ugwu-Aku by the local inhabitants. This case was regarded as having a spiritual essence and, therefore, protected by the people of Nkalẹgụ Ọbụkpa from the enemies during the war. It was said that any who ran and hid under the cave could never be seen again and no gunshot in that direction could penetrate any target. However, if the enemies decided to trace them to the cave, one of the stones hanging over would fall upon them and that would be their end. A good example is a large rock that lies flat on the surface of the cave. The story was that some herdsmen from the Igala area took their horses to the cave to enable their horses to drink from the spring of the cave, thereby spoiling the ancient rite. It was said that immediately the horses  started drinking, that a huge rock broke off from the top of the cave and smashed all those horses and their riders to pieces. That rock, to this day, is referred to as ‘Omeranyinya – the Destroyer of horses.

The above is also common to trees. There are such trees that are revered so much because of their embodiment of divine presence and spiritual essence. One of those trees is the Ọfọ tree. Ọfọ is a mysterious tree, just like Anunuebe and Inyi tree that was highly revered. Inyi tree, for instance, was believed to have the power of arresting witches. Nkpozi Obeta Nwa Arua told me a story of his late blood brother, Alex Nwa Arua, when he stayed at Itchi. According to him, there was an Inyi tree there and one day, they were three then that went to fetch grass for their various goats (they were small then). When they saw the Inyi tree in the bush, they decided to play a game. The game is that they would cut off the bark of the Inyi tree and each of them to swear that if his mother is a witch that the Inyi should arrest him. They did so and then the third person, whose mother was suspected to be a witch chew his and then had the Inyi substance holding him seriously on the throat until he started vomiting blood. The elders came to their rescue anyway, but they were told never to play such type of game with the Inyi tree. Nkpozi Obeta Nwa Arua, who told me the story is still alive today.

Another story as regards Inyi is obtainable in my own village, Amọzara. There was an Inyi tree located at the altar of Inyi shrine. There was a deity then called Inyi and was worshipped by the entire village. The deity is no longer worshipped presently, but the altar remains up to this day surrounded by forest. It is called ‘Ọnụ-Inyi’ and that’s by your left if you are going from Amọzara Bus Stop down towards Amẹhara-Ovoko village. You had to pass through the small forest by your left before reaching Otobo-Achị. There was an Inyi tree there and the villagers decided to cut down the tree and use its trunk in building the village civic hall then.

After that, the villagers started to die massively. This continued until the elders went to consult a diviner who told them that the Inyi tree was on a revenge mission for having it cut down. It was said that when the tree was about to be felled, that it gave out a loud cry like the heaving of a great giant and then it fell. The father of Donatus and Gabriel Ike, I was told, died because the timber extracted from the tree was kept in his house. The village had to mourn the tree as one would mourn a dead human with a cow and a piece of cloth tied around its trunk. Anyone from Amozara can ask his/her father about this story. After this was done, it was said, that the sudden death stopped.

This same story of Inyi also goes for a tree called Anunuebe. Anunuebe or Nnunuebe is also called Oke-Oshishi (Powerful Tree) and some native doctors bear that name to show how powerful they are. Anunuebe or Nnunuebe is so called because no bird perches on that tree. Also, no mortal can be seen under the tree and stay alive. It is said that no grass grows wherever the shadow of the tree covers. However, Anunuebe is highly medicinal and used for many spiritual performances.

When one cuts the bark of Anunuebe, the tree will make a sound as one makes when one is taking in a breadth forcefully, then another sound would come out as though one breath out forcefully from the nose – like a sigh. Immediately this second sound is heard from the tree. The person who so cut the bark of the tree dies at the spot where he is. What the native doctors usually did was to stay close to the shadow of the tree and send their slaves, giving them the instruction to hastily cut off the bark of the tree and run out from the canopy in a twinkle of an eye. The slave would obey and be fast as possible so that by the time the Anunuebe tree would give out a second sigh, he was already outside the canopy. He would die there and the medicine man takes his medicine and, probably, buries his slave.

Like the two trees mentioned above, ọfọ tree was also revered because of its embodiment of spiritual essence. The stick of an Ọfọ tree fell down on its own and, whenever it did so, faced the east. The branch of an Ọfọ tree was usually picked there; it lay facing the east. History has it that anybody who had the Ọfọ stick in his hand and tells a lie, that he dies that same day in a mysterious way. For this reason, Ọfọ became a staff given to the Ọzọ titled men, or Ama titled men, as the term is used in Nsụkka, to hold while adjudicating cases. With the Ọfọ staff in their hands, they dared not lie while adjudicating cases; otherwise, they die that day mysteriously. Also, one who came to serve as a witness was given the Ọfọ staff before s/he presented his/her case in support or against. With the staff in his/her hands, s/he dared not lie or die mysteriously for it. For this reason, one who made a statement, a witness, an adjudication, with Ọfọ in hand, was automatically believed because ‘o ji Ọfọ (s/he holds Ọfọ). Ọfọ then became a symbol of justice. This is why we have such a name as Ejiọfọ to show that one is upright. 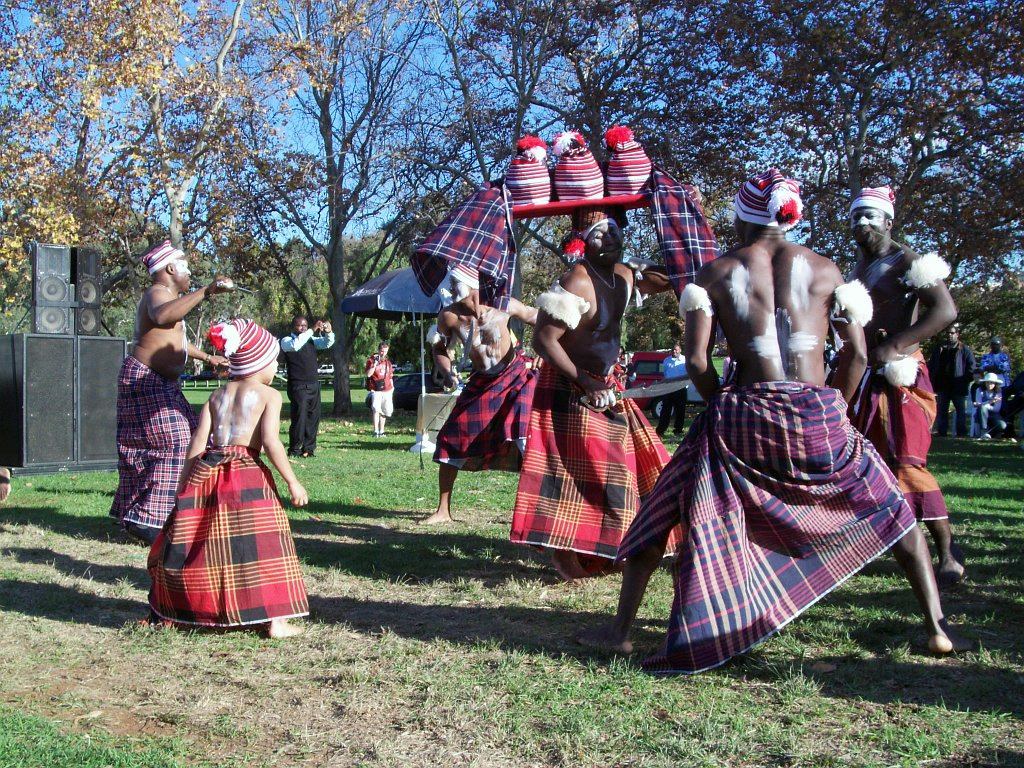 Igbo warrior dance performed during a festive occasion by an Abiriba cultural troupe. Ndiigbo are indigenous to the tropical rainforest of the eastern half of Southern Nigeria.

Why then the name Ọfọma? The name arose because many went and secretly carved other sticks, making them look like Ọfọ staff and then present them while speaking saying that they hold Ọfọ and in such way deceive the people. Ọfọma as a name is an expression that even if the people are deceived, Ọfọ itself cannot be deceived because Ọfọ ma onye ji ya (Ọfọ knows those that holds it).

Ọfọ, as earlier said, became a symbol of justice and uprightness. It was believed that one with Ọfọ could not be harmed. This is quite metaphorical. Those with Ọfọ could not think of harming others because Ọfọ first searched your innocence before fighting for you. How did Ọfọ work? One who had the Ọfọ staff would, every morning, make a prayer holding it stating his innocence – that he didn’t think evil of others, he never took someone’s wife, he never killed anyone, he never took things belonging to others etc – and then he could walk the day without the fear of being hurt by the enemies because Ọfọ would protect him from harm. This is what is called ịgọ Ọfọ (praying innocence before Ọfọ. After that ịgọ Ọfọ, the person could boldly walk without the fear of being harmed.

If it were a fight that one wished to engage in, he would tell Ọfọ how he was not the one that looked for trouble; how he was on his own and somebody brought trouble to his house. Thus, after pleading innocence before Ọfọ, he boldly went to war and was sure Ọfọ would support him in the ensuing battle. This is where the term Ọgụejiọfọ sprang from. The Igbo man believes in the potency of Ọfọ that they say Ọfọdile (Ọfọ is potent).

I believe, with this writeup, I have contributed my own quota in making sure we know why we are who we are and why some things are found in our African world. We need to teach our past for the sake of our children yet unborn.