The Woes of the Indigenous Inhabitants of Anambra-West LGA Emblematize All That Is Wrong With Today’s Unitary Nigeria.

This YouYube video was produced by the TVC Community Forum to spotlight the abject neglect of the inhabitants of Anambra-West Local Government Area (LGA) of Anambra State, Nigeria. Anambra-West is one of the 21 local government councils that are used to govern the state of Anambra in Southeast Nigeria. The television crew traveled through many parts of the state, including the completely abandoned local government headquarters at Nzam, local rice mills, schools, local markets and, of course, extensively documented the near absence of socioeconomic infrastructure to serve dwellers of the so-called breadbasket of Anambra state. The conclusion from this video documentary is that Anambra-West is the most underdeveloped part of Anambra state, if not Nigeria. Paradoxically, this jurisdiction harbors ample deposits of crude oil and natural gas, has fertile agricultural land and has abundant freshwater resources.

One thing that must be noted upfront is that each of the 774 local councils of today’s Unitary Nigeria is given monthly cash allocations from the national coffers in Abuja to sustain itself. Here is the question. What happens to the monthly allocations given to operate the Anambra-West LGA? Furthermore, a dual-carriage highway (the Otuocha-Nzam-Ibaji road) was awarded to a Warri-based construction firm more than a decade ago. This vital highway, which is designed to run on the eastern bank of the Niger River, is intended to link Anambra state directly to the Federal Capital Territory, Abuja. This highway was abandoned soon after a short segment of it was built at the Umueze- Anam end. Because of the topography of that riverine part of Anambra state, bridges are essential to link up communities and the local government with the rest of the state. The Nzam-Nmiata Bridge construction project was flagged off in 2008. But up till today, the construction work remains in limbo.

Anambra-West is best suited for agriculture because of the fertility of the soil and abundant fresh water supply. Local farmers produce plenty of yams, cassave, rice and other popular staple foods. But their dilemma is the lack of roads and other transport infrastructure to move the agricultural produce to the vast consumer market of Onitsha which is only a stone throw downstream from the LGA. The farmers lament that they are often compelled to use the canoes to ferry their agricultural produce across the Niger River to Delta state, where they get only a fraction of the market price for their labor. The worst nightmare for the local farmers is that due to the local glut of farm produce that can’t be promptly evacuated, they often watch helplessly while their farm yields rot away.

Something bizarre happens in Anambra-West LGA. Nzam is the LG Headquarters; it is in this town that the permanent structures to house the local council’s administration is built. The interviewees in this video assert that no Lo9cal Government official lives in Nzam or the entire LGA. Those assigned to administer Anambra-West prefer to live outside the LGA and work remotely from wherever they reside. Umueze-Anam, a community that is located in the southern end of the LGA, is supposedly being used as the “makeshift Local Government Headquarters”. The video documentary shows that the Umueze community is even in worse shape than Nzam. At least, the latter is a much larger community with more visible urban features.

The school system is in shambles. A school building that was built by the government is shown to be presently empty and overgrown with weeds. Private school setups are now filling the void, but the standards are very and the local children are learning under very decrepit conditions. Designated hospital buildings are empty and in a state of near collapse. A healthcare facility was shown to be used by the locals as a public toilet, for example. The signpost for the Nigeria Police headquarters for the local government is partly collapsed and the building premises were taken over by aggressive weeds. Nzam has some electric poles with cables in some locations. But a long-term resident of Nzam averred that no electricity has flowed through the wires in the past 40 years. A communi8ty leader lamented that Nzam is possibly the only Local Government headquarters in the country that is not connected to the national electric grid network.

Anambra-West LGA is about 40 kilometers from Awka, the administrative capital of Anambra state. The incumbent governor of Anambra State, Mr. Willie Obiano, hails from Aguleri, Anambra-East, which is just across the Omombala River from the grossly neglected Anambra-West LGA. The above information is crucial to illustrate that Anambra-West is not in a remote location that is isolated and thus not well-known by the rest of the top leadership echelon of Anambra state government. The single thing which one can identify that separates the lot of the indigenous inhabitants of Anambra-West and the rest of their kin living across the Omombala and Niger Rivers is the total absence of all-season land transport infrastructure among the former. 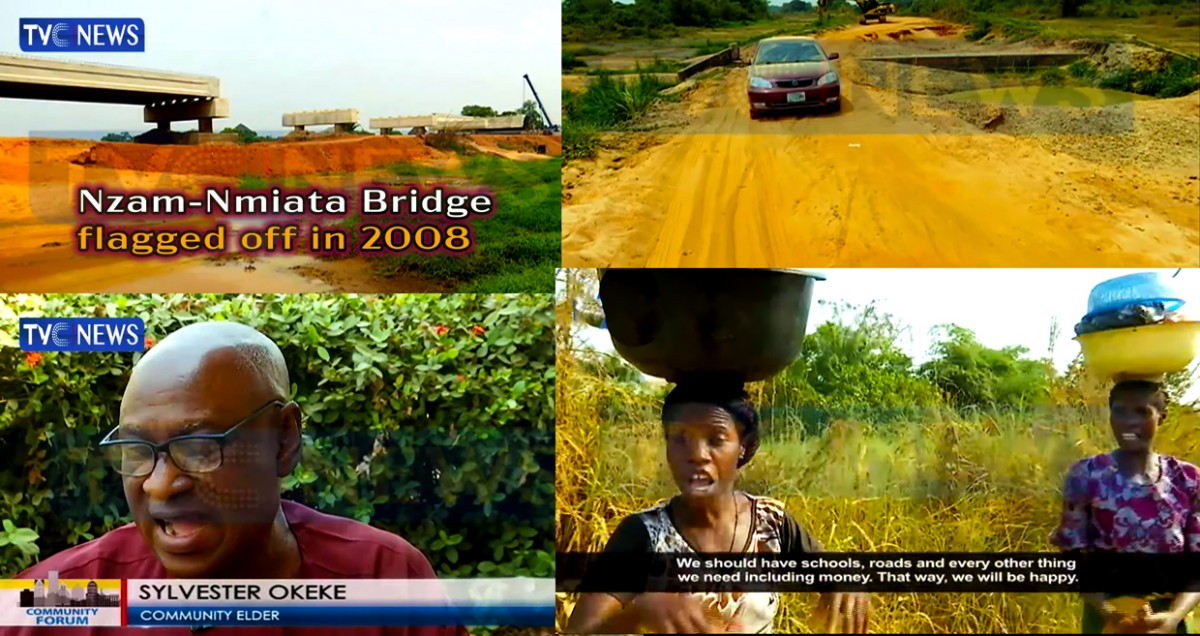 Nzam-Nmiata Bridge, which was flagged off in 2008 by the Anambra state government, is still in limbo and uncompleted. This has contributed to the continued isolation of Anambra-West LG headquarters from the rest of the state. Stakeholders lament the dearth of infrastructure and the other amenities of citizenship.

One may blame the absence of motorable road access to Nzam from Awka as the plausible reason why the LG administrator and staff opt to not reside within the jurisdiction in which they ostensibly work. Because of lack of roads, the LG Council Headquarters at Nzam, which must have been constructed with billions of naira by the government, is abandoned for weeds and wildlife to take over while the populace is left to bemoan their fate. Judging from the video documentary, it is a hellish undertaking to attempt a drive on the archetypal dirt roads that link the farming communities of Anambra-West LGA.

The solution to the Anambra-West Nightmare

Ordinarily, one would recommend that land transport infrastructure should be provided to Anambra-West since this appears to be the underlying cause of the local inhabitants’ woes and existential misery. But it seems as if the pr0vision of all-seasons motorable roads and bridges as well as navigable waterways is easier said than done. Before hanging one’s hat on such a pipedream, one must find out why these much-needed socioeconomic amenities have never been put in place to date despite the clear evidence of past attempts. The federal Otuocha-Nzam-Ibaji highway and the state’s Nzam-Nmiata Bridge are now white-elephant projects which are unlikely to become ready for routine use anytime soon.

Beyond the usual misappropriation of public funds by corrupt officials who readily collude with negligent well-connected private civil-engineering contractors, there are geological and topographical issues in the Anambra-West LGA which must first be satisfactorily addressed before the yearnings of the local inhabitants can be satiated.

It is easy to see that Anambra-West LGA has geological and topographical features that resemble what obtains in the Niger River delta. The land is flat alluvial soil and the water table is high. Road construction on this sort of soil is a challenge any day. Even after initial construction, structural failures are commonplace because the foundation for the new structure rests on loose loamy soil which readily expands and shrinks depending on the availability of underground water. In the dry season, the roads may be motorable. But during the rainy season, the underground water level rises and combines with plentiful rainfall to cause widespread flooding. Asphalted roads become ruined if allowed to remain submerged under ware for extended periods. Foundations for bridges, if not correctly designed and constructed, tend to settle with each rainy season cycle, thereby subjecting whatever is built to immense structural stresses that usually culminate in failure and collapse. The video documentary shows that sections of the Otuocha-Nzam-Ibaji federal road are already in a state of collapse, even though the roadway under construction is hardly being used by vehicular traffic.

The reason for the preceding is to review the probable underlying reasons why the provision of land transport infrastructure is tardy in Anambra-west LGA and why promises being made by politicians of today’s Unitary Nigeria may never be able to do what it shall require to get the local inhabitants of this neglected part of Anambra state out of their chronic misery. The best chance for Anambra-West LGA to be able to get its fair share of the government largesse is during the incumbent Governor Obianor’s tenor because he hails from Agulari, located on the eastern bank of the Omombala River. When the governorship position shifts to Anambra South in 2021, the pharaoh who does not know Joseph may ascend to power at the State House, Awka. The central government in Abuja is becoming increasingly dysfunctional with each passing day and coupled with the global collapse in the price of crude oil, many outstanding projects under construction may be forced to slow down, if not abandoned altogether. 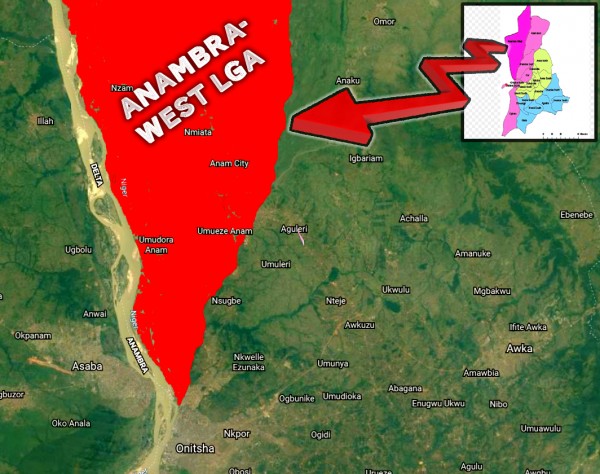 Anambra-West LGAis bordered on the west by the Niger River, Ayamelu and Anambra-East LGAs in the east As the only part of Anambra state with a proven oil and gas deposit in commercial quantities, the future of this LGA is not as dire as present circumstances suggest.

Anambra-West LGA emblematizes all that is wrong with today’s Unitary Nigeria. If one takes some care to watch the YouTube video documentary, one can readily appreciate the fact that the indigenous inhabitants of this LGA have been left out entirely in deciding their own wellbeing and fate. The government in Abuja pledges monthly allocations to each of the 774 local councils in the country. Such monthly subventions are supposed to be used to assist in recurrent expenses like payment of workers and also for capital projects. Payments intended for Anambra-West stakeholders’ upkeep are collected from Abuja and held up in the State House, Awka, where the funds are used in paying the very local government workers who have since abandoned their job assignment at Anambra-West LG Headquarters at Nzam. This vicious cycle can only be broken when the indigenous inhabitants of the local council area are adequately empowered to partake in the planning and management of their own affairs.

The principle of self-determination MUST be institutionalized nationwide before any dent can be made in addressing the many woes that bedevil the marginalized citizens of today’s Unitary Nigeria. Anambra-West indigenous inhabitants know themselves and their ancestral turf much better than any outsider can ever do. The people live in farming communities. They produce enough food to feed themselves and to sell to earn extra income. They know their most pressing needs and thus can better prioritize the use of any cash help that comes their way from the outside. Left to the indigenes, they would have preferred to commit their own share of allocations from Abuja coffers to building local all-seasons roads for exacuating their agricultural surpluses. The building of a dual-carriage interstate highway or long-span land bridge, though desirable, can wait until after the basic needs of the folks are met. The locals can also invest in the dredging of lower Omombala River to enable them to use this waterway in evacuating their farm produce downstream to the densely populated commercial city of Onitsha next-door.