As political parties begin primaries to elect their candidates, former Military Head of State, Gen. Abdulsalami Abubakar has counseled them to rise above sectional sentiments and consider competence.

To him, Nigeria at this stage of nationhood should not be debating zoning but should concentrate on getting any competent Nigerian, irrespective of his state of origin or religion, who can solve myriads of challenges facing the country.

He said, “With the exposure of the younger generation and their connection, I think Nigeria is not short of such individuals across the federation. It is up to the politicians to try and see how they can come up with such an individual. But as long as we keep saying this zone produces this, another zone produces that, then the problem continues. We are not thinking as Nigerians, we are thinking of our villages, states and so on.”

Gen. Abubakar, who supervised a successful transition that handed over the rein of power to a democratically elected government on May 29, 1999, also declared that there is nothing wrong with the 1999 Constitution his administration bequeathed to the country.

The former head of state in an exclusive interview with The Guardian in his Minna, Niger State residence said he was surprised that after 23 years that the constitution has been operational, some Nigerians rose up against it and described it as the root cause of all problems facing the country.

While admitting that there is no perfect Constitution in the world, he said instead of the critics of his administration examining the operators of the constitution, they have been calling for the postponement of the 2023 general elections till a fresh constitution emerges, which he kicked against.

And for those who have been clamoring for an interim government till the country has a new constitution, Gen Abubakar said, while he was not begrudging their personal opinions, he said their demands could not be found in the Constitution of Nigeria, which makes it unconstitutional and urged them to join hands with the National Assembly in its ongoing efforts of amending the Constitution.

He said those who condemned the 1999 Constitution saying it was foisted on the people without Nigerians’ input might have forgotten that his administration set up a Constitution Debate Co-ordinating Committee (CDCC) headed by Supreme Court Justice, Niki Tobi, and Dr. Suleiman Kurmo as deputy chairman.

He recalled that the Committee went around the country to collect memoranda from the public through town hall meetings in Benin, Enugu, Jos, Port Harcourt, Kaduna, Kano, Ibadan, Lagos and Sokoto.

He disclosed no military formation was visited during their assignment and wondered why people described the constitution as a document that emanated from the military.

He said, “Okay, the people that were consulted by this committee are they not Nigerians? Is it a group of military people that sat down and said this is what they are going to do? We are not lawyers; the Committee was headed by Supreme Court Justice. What is unfortunate in the whole matter is that people are now faulting it after 23 years of its existence.”

General Abubakar, the Chairman of the National Peace Committee, who turns eighty on June 13, said the reports of the committee indicated that many Nigerians and groups were unanimous in their adoption of the 1979 Constitution with little modifications.

But unknown to many of the critics of his administration, the 1979 Constitution was a product of the 1975 Constituent Assembly attended by many eminent Nigerians across the country. 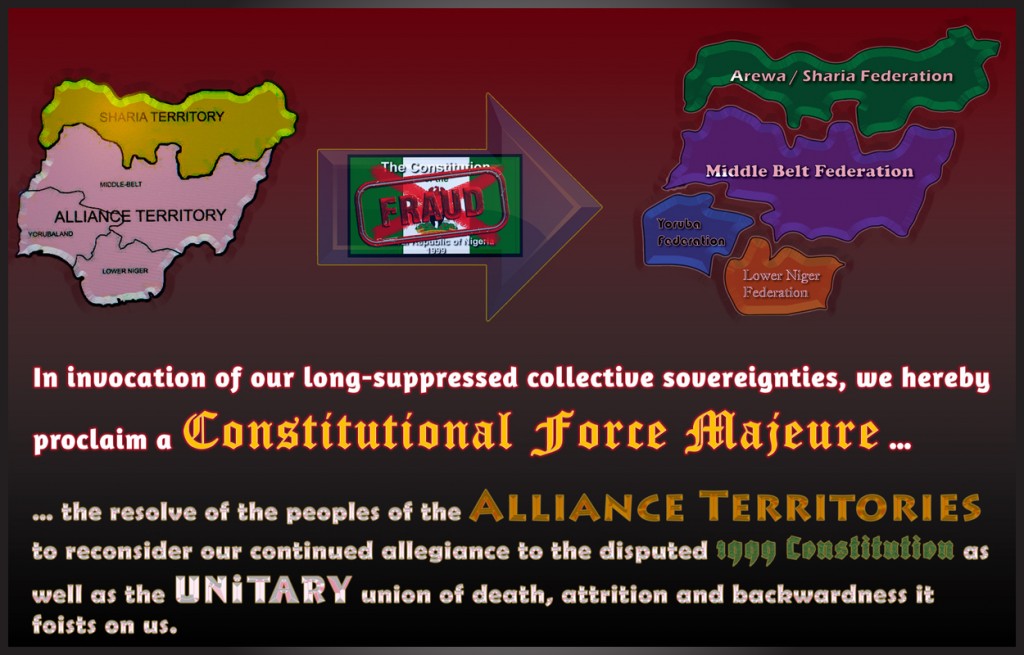 Constitutional Force Majeure to take down the imposed fraudulent 1999 Constitution was initiated on December 16, 2020 by the Nigerian Indigenous Nationalities Alliance for Self Determination (NINAS).

“So, nation-building is like a constitution, it is a continuous process and I am happy people are trying to see what amendments they can do to the Constitution. Can you point out any basic changes that have happened even with the amendment that is going on in the National Assembly?”

Fielding questioned on why his administration did not organize a constituent assembly to produce a new constitution with inputs from different nationalities, he said, “When you organize constituent assembly, is it not Nigerians that you will invite to be there, is it every Nigerian that you will talk to? Are they different from the people Justice Niki committee spoke to? Was there a military man in that committee who produced that constitution? How are you sure that every nationality is going to be represented? Let Nigerians please give peace a chance and try to see how this nation can move forward.

“Let’s have a nation, let’s think about how really to live together and be each other’s keeper. If you find something wrong with the constitution, bring it out and try to see how amendments can be done.”

On why Nigeria’s unity and national cohesion are still a mirage, the former military leader said, “We are fixated on regional politics, in thinking for our village, in thinking of our state, in thinking for our region. You meet people, instead of thinking about Nigeria, we are thinking about our village, state and region before you talk about Nigeria. Again, you find that quite a number of politicians think that way, I think this is our basic problem. If like members of the Armed Forces, every politician will think of Nigeria, as his constituency and think about Nigeria, Nigeria will be a better place.

“You see how I wish by now Nigeria will have come out of the mentality of our region or our state, the zoning issue. By now I was hoping Nigeria will think of a Nigerian who is competent, who is capable, regardless of where he comes from that can be trusted and elected to lead this country. Yes, the political parties have their method of appointing or selecting their flag bearers. How I wish the political parties like I said will appoint a competent and focused individual to hoist their flag.

“When we were growing up here in Minna, I am very proud of that, two times an Igbo man was elected on their own right as the chairman of Minna Local Government. I grew up to find that we have two Yoruba councilors on their own right. Besides the chairman of the local government, there are some Igbo people who were elected as members of this Gwarim local authority. And I must also say there was a Nupe man, who was elected Mayor of Onitsha; that was when we were living as Nigerians.

“It is still possible. How does a Nigerian go and contest elections in Canada or UK or America or Austria or Australia? So, why can’t we if we really want to develop this country? Why can’t a Nigerian, wherever he is, contest in the presidential election?

Culled from The Guardian, Nigeria