In today’s Nigeria, there is no shortage of astute analysts and pundits who can go to a great length to diagnose the ills that have crippled the country in the past 50 years. This YouTube video by a leader of the Ibom Peoples’ Republic (IPR) leader, Offiong Offiong Aqua, has beamed the searchlight on an important aspect of Buhari administration’s mismanagement of the national economy and diversion of resources emanating from the oil-producing states to fight an elusive war against the Boko Haram, a terrorist Islamist group that has brought untold ruination to Northeast geopolitical zone. The IPR leader wonders why the so-called Excess Crude Account (containing funds set aside for the rainy day) should be emptied out sooner for the purpose of fighting chronic security in the faraway Northeast zone while nothing, whatsoever, is set aside for Lower Niger indigenes in whose ancestral lands the crude oil is produced. Dr. Aqua laments that oil blocks in his state, Akwa Ibom, are preferentially assigned to indigenes of the Northeast while giving none to Akwa Ibomites. “Why should oil-block owners in the Northeast not be asked to finance the security operations in their zone with the surplus cash reserves in their possession rather than hasten to deplete the $2.31 billion in the Excess Crude Account”, he queries?

Out of the total sum of $2.31 billion that was in the Excess Crude Account, Vice President Yemi Osinbajo had earlier authorized the withdrawal of $1 billion to fund security operations against terrorist insurgents in the North. The IPR leader is alarmed that the recently reported approval by President Buhari to withdraw another $1 billion from that account is a deliberate plan by the incumbent administration to empty out the Excess Crude Account of all funds in case the ruling party is defeated and replaced in the forthcoming general elections.

Dr. Aqua went on to spotlight the communique issued by a recent meeting of the National Christian Elders Forum which asserted that there is complicity between the Islamist unitary government of President Muhammadu Buhari and the terrorist Boko Haram and Fulani herdsmen militia which are committing mass murder and mayhem in all parts of the North. Spokesperson of the Christian elders’ forum, General Joshua Dogonyaro, went further to urge Nigerian Christians to rise up to defend themselves against the unrelenting murderous onslaught by Islamist terrorists operating in the North and else nationwide. A few weeks earlier, another well-decorated retired general of the Nigerian Army, Theophilus Danjuma, had publicly enjoined his kinsmen in the Middle Belt to defend themselves from the marauding Fulani herdsmen militia because the Nigerian military institution, which is colluding with the terrorists, has refused to defend their folks against ethnic cleansing. The IPR leader urges his followers to hearken to the wise injunctions from Generals Dogonyaro and Danjuma who, as former military top brass, surely know what they are talking about. 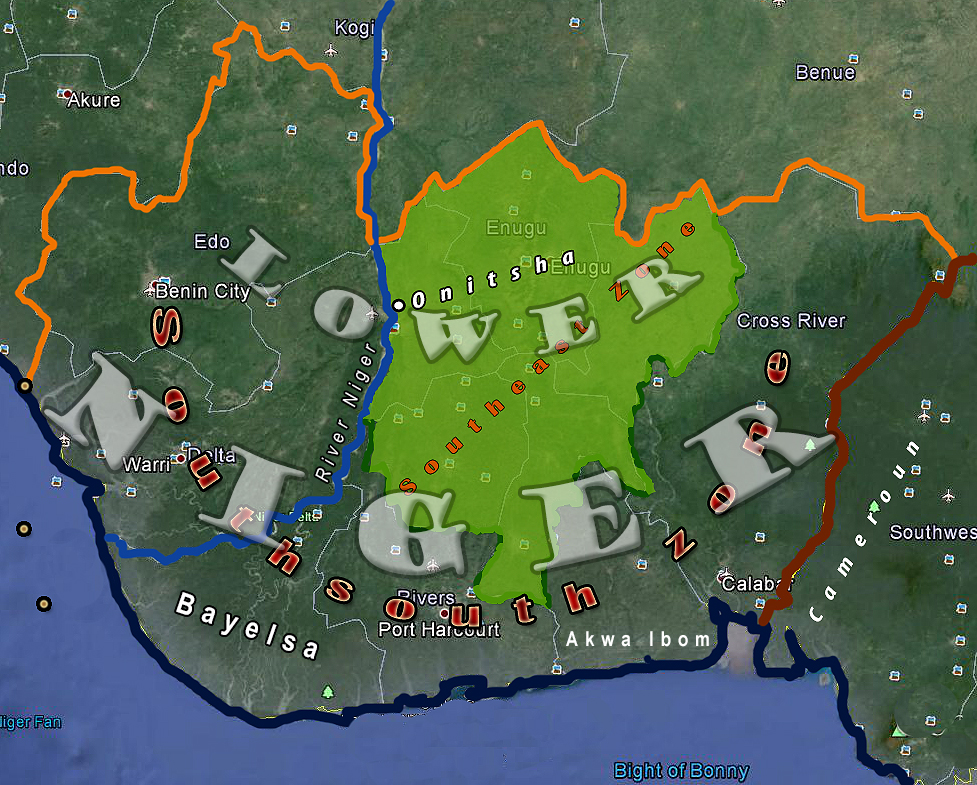 Geopolitiical delimitation of the Lower Niger territory; a closeup map of oil-producing part of Southern Nigeria as recorded from space by Google

The Ibom Peoples Republic (IPR) agonists constitute one of the many self-determination groups operating in the Lower Niger. This group’s primary area of interest is today’s Akwa Ibom state which is one of the largest producers of crude oil and national gas in the country. The group laments that, because of the hijack of God-given resources of the Akwa Ibom peoples by the Abuja-based unitary government of Nigeria, the wealth emanating from their own ancestral lands arbitrarily diverted into developing and solving the sundry problems of other parts of the country while their folks live with and  endure all the ravages of environmental pollution and ecological degradation associated crude oil production. To compound matters even further, the Abuja-based Buhari government is presently borrowing huge sums from foreign creditors with Akwa Ibom petroleum reserves as collateral.

The problem, however, is that IPR leadership echelon is a relatively small outfit with limited manpower and technical knowhow. Although it has the right instincts and focus, Akwa Ibomites’ overall interests are likely to be better protected when Dr. Aqua and his group resolve to coalesce their efforts with many other small and large self-determination groups operating in the Lower Niger, of which Akwa Ibom state is an integral part. The Lower Niger Independence Movement (LONIM) is the large umbrella entity for many self-determination groups in the Lower Niger to coalesce their effort in order to achieve a greater impact in actualizing the aspirations of Akwa Ibomites and rest of  the indigenous peoples cohabiting the wide swath of territory that encompasses the Niger River delta to the west and the tropical rainforest zone to the east and north. The LONIM modus operandi is structured to allow for local autonomy and control while, at same time, offering a megaphone to amplify the voices and wishes of all indigenous ethnic nationalities of the Lower Niger.