To Get a Handle on Today’s Runaway Insecurity, There Must Be Local, State Police Plus the Nigeria Police – Gov. Ishaku

This YouTube video by the governor of Taraba State, Nigeria, Darius Ishaku, is noteworthy because the demands made in this video never emanated from Nigeria’s ruling class. The governors of the thirty-six states in the country see themselves as the frontline defenders of the status and thus would not make any public statements that spotlight the failure of government as Governor Ishaku has done on the security failure throughout Nigeria. The governor went further to identify the centralization of the Nigeria Police as the underlying reason for security collapse throughout the country. He recalls the tragic loss of lives in his own state among government officials and warned that similar conflagrations torment the Southwest geopolitical zone.

Governor Ishaku opined that the abject failure of the Nigeria Police is the reason why the government prefers to deploy military troops in policing duties. He reminds Nigerians that their constitutional model is supposed to be patterned after that of the United States of America. In the US, policing duty is delivered by the local, state and federal police as required. But in Nigeria’s 4th Republic, powered by the 1999 Constitution, only one security force, Nigeria Police, covers all nooks and crannies of the country. There are 68 items sequestered in the 1999 Constitution’s Federal Exclusive Legislative List; police, weapons, roads, railroads etc are examples.

According to the 1999 Constitution, Governor Ishaku is the Chief Security Officer of his state, Taraba. The same constitution denies him the right to control the policing of his state. The citizens of his state must rely on the security protection offered by faraway Abuja. Residents of his state cannot bear arms and own ammunition to defend themselves. The deaths reported by the governor in his state were caused by a lack of local and state police that understand the locale. Governor Ishaku demands an amendment to the 1999 Constitution to create state and local government police. He wishes this process to proceed immediately by having the National Assembly to spearhead the necessary amendments.

Taraba state is in the Middle Belt Region that has joined with the South to initiate a Constitutional Force Majeure (CFM) to take down the imposed fraudulent 1999 Constitution which has since been tagged as the cause of all the woes of today’s Unitary Nigeria. Governor Ishaku needs to be updated regarding his constituents’ position on the widely repudiated and failed 1999 Constitution. The CFM features five demands by the Nigerian Indigenous Nationalities Alliance for Self-determination (NINAS) which the Head of State must respond to before the expiration of the 90-day ultimatum on March 15, 2021. The NINAS demand is to discard the 1999 Constitution, just as South Africans jettisoned the Apartheid Constitution, and to commence a transition to a new negotiated order.

A sense of patriotism and responsibility compels Governor Ishaku’s demand that Nigerians’ security nightmare should be tackled in finality immediately. His viewpoint that the National Assembly in Abuja should resolve the constitutional miscues that result in widespread insecurity fails to acknowledge and work with what his constituents are already committed to, as we speak. 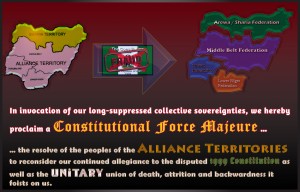 Constitutional Force Majeure to take down the imposed fraudulent 1999 Constitution was initiated on December 16, 2020 by the Nigerian Indigenous Nationalities Alliance for Self Determination (NINAS).