To Make a Dent in Today’s High Unemployment, Nigeria’s Economy Must Grow at 10% or Higher – Chukwu

Nigeria’s unemployment crises again came to the fore early this week as a total of 25. 6 million applications passed through the Nigerian National Petroleum Corporation (NNPC) recruitment portal before it formally closed Tuesday.

A source familiar with the recruitment process told Daily Sun that the 25.6 million applications were mind-boggling to both NNPC management and the Federal Government as it further painted the picture of the magnitude of the country’s unemployment challenge.

The NBS data revealed further that the total number of people classified as unemployed – which means they did nothing at all or worked for a few hours (under 20 hours a week) – rose from 17.6 million in Q4 2017 to 20.9 million in Q3 2018.

On March 13, 2018, NNPC began massive recruitment drive to fill various positions at the graduate trainee, senior officers, supervisory and managerial cadres with the opening of its recruitment portal.

Commenting, Head of Tax and Corporate Advisory Services at PwC Nigeria, Mr. Taiwo Oyedele, said the combination of unemployment and underemployment figures in the region of about 40 percent was responsible for the upsurge in applications, adding that some of the applicants are already employed but are seeking better opportunities.

He maintained that until the government begins to take practical steps to grow the Micro Small Medium Enterprises (MSMEs), the over 40 million unemployed youth figures will continue to balloon.

He said there are over 30 million MSMEs in Nigeria lacking the right monetary policies to access finance and vocational training which may enable them to expand and employ the over 30 million job seekers in the category.

He said NNPC may not employ up to one percent of the application received which he said may be about 1,000 people or less, stressing that the remaining number returns to the labor market.

‘‘We hope that NNPC deploys merit because in the absence of that, you see all manner of the list coming from politicians and the big men in Nigeria to take up the slots and at the end of the day, the purpose would be defeated,’’ he said.

For his part, Managing Director Cowry Assets Limited, Mr. Johnson Chukwu, said the figure should not surprise Nigerians because the public sector has not carried out a major recruitment exercise in the last four years, hence the pressure on NNPC. Chukwu said a rise in the country’s unemployment figure from 18.8 percent in 2017 to 23.1 in 2018, translating to about 80 million unemployed youths could have been responsible for the NNPC application figure.

He said to reduce the unemployment figure, Nigeria needs to grow the economy at about 10 percent, by coming up with a specific industrial policy which will aid growth. 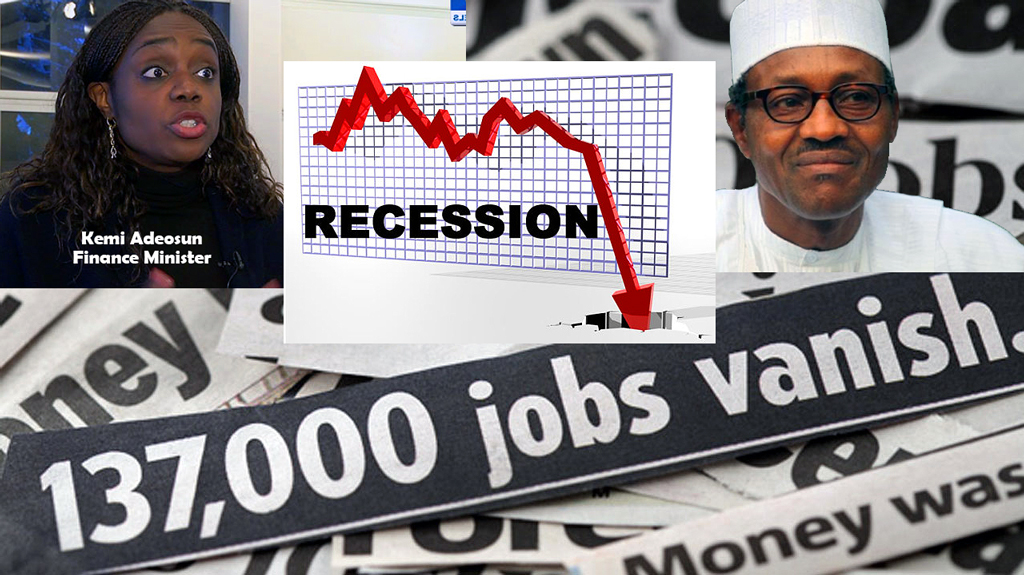 Buhari voodoo economics as designed by his Finance Minister, Kemi Adeosun. Nigerian economy has never fared as bad as it is now under the Buhari watch.

The Phase One of the ongoing recruitment exercise by the Nigerian National Petroleum Corporation (NNPC) which kicked off via nationwide advertisements in the national dailies and online media on March 13 ended midnight yesterday with the closure of the corporation’s application portal.

A release today in Abuja said the Second Phase of the exercise involving shortlisting of qualified candidates had started, explaining that the qualified ones among them would be invited to participate in a computer-based aptitude test.

NNPC said tests would be administered in about 50 centers across the country, saying those who emerge successful in the tests would subsequently be invited for oral interviews for final selection.

NNPC, an equal opportunity employer in the oil and gas industry value chain, including exploration, refining, transportation and marketing of petroleum products, recently placed advertisements to recruit some categories of new hands to buoy its operations nationwide.

Lawyer Threatens to Drag NNPC to Court Over Recruitment

An Abuja-based lawyer, Mr. Pelumi Olajengbesi, has faulted the age criterion placed on the ongoing recruitment of the Nigerian National Petroleum Corporation.

In a letter written to the Group Managing Director of the NNPC, Dr. Maikanti Baru, on March 26, Olajengbesi threatened to drag the national oil company to court for placing discriminatory age requirement on qualified Nigerians who would have applied for the jobs recently advertised by the corporation.