The oppressive one-North is on its deathbed. General Yakubu Danjuma sang the Nunc Dimittis on Saturday. But if the Middle Belt states are free finally, the credit cannot go to this taciturn general from Takum, Taraba state.

The Fulani conquerors deserve the prize; they scored the golden-own goal.  It has taken the Hausa/Fulani and their Kanuri collaborators just three years of bloody indiscretion to unravel 104 years of one-North myth.

The greedy mice of the tiny Fulani elite have peed into the North’s soup pot; everyone has now learned to answer his mother’s name. But then, the battle has just started. The dying won’t let go of their inheritance quietly.

Beyond Danjuma’s Taraba, Benue and Plateau, is there anywhere else that is not feeling the pangs of Hausa/Fulani/Kanuri (HaFuKa) elite destruction?

I call their abode the Core-North which is not interested in catching up with anybody. Its interest is in dragging everyone else to where it is – on ground zero.

It sees the beauty in the millions of untrained children milling its streets, maiming and killing for their sport. Northern Nigeria is the death of Nigeria and its destiny – we better be ready for the obsequies, the funeral rites.

Look at that Dapchi school – did they not say it is a secondary school? I wanted to ask why none of those rescued girls could communicate in English. I saw a bold one on the CNN; an interpreter did the job for her. I wanted to ask why? But then, I remembered my father warned me a long time ago to seal my lips when sandstorms howl. “There are moments in every age when silence gives peace,” he told me. Just like his prayers, my father’s counsel has never failed me. They have surfaced to solve riddles for me at every crossroad of life. 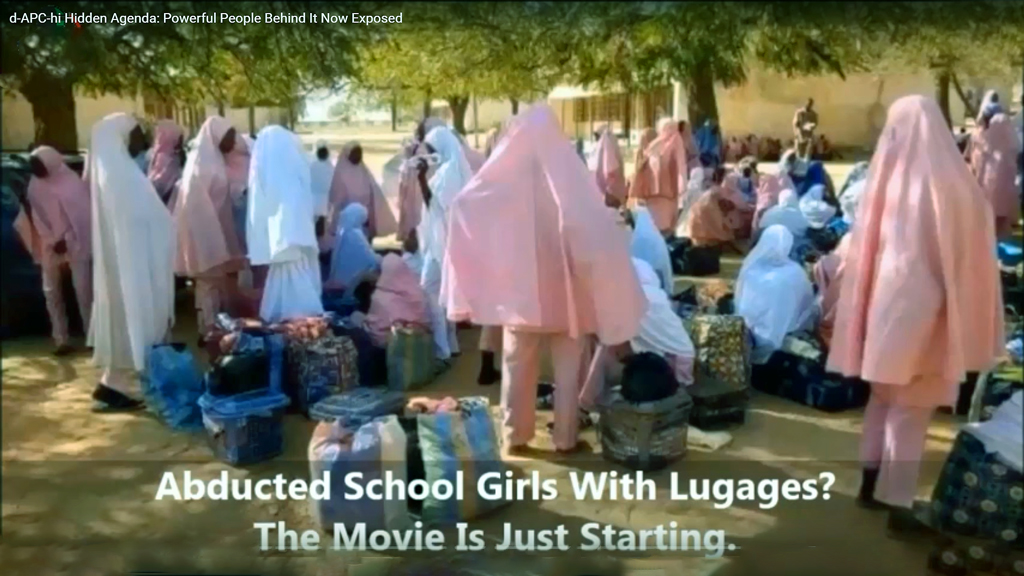 Cleanly dressed “abducted” school girls shortly after being dropped off by Boko Haram terrorist insurgents at Dapchi. Girls had bags of luggage for carrying their personal belongings.

Today, silence is what the North demands from all. You heard what the president said last Friday? We are not to tell the sick that he is unwell. We will be silent.

Remember the world is not waiting for anyone, but the North is dragging the South into its misfortune of stunted existence. It educates only children of the royals. The hewers of wood are very happy scavenging in the woods; they are richly blessed, contented with their miseducation in Chibok and Dapchi.

North to South, presidents and governors abandon the poor to fund their fancies. They borrow and spend tomorrow’s money building long bridges which lead to nowhere. American billionaire, Bill Gates told our president and governors this much last Thursday: “if you build roads without educating and caring for the people, your roads and bridges are mere ornamental tragedies.”

Even our ancestors warned us: The child you left unbuilt will auction the brick and mortar you are investing in. Did we listen? We ignored the ancestors. We despised them and their meddlesomeness. We see this clearly in the North’s misfortune. The foundation is also being massively laid in the South by a generation of governors with strange ideas. Mega schools, zero education is the craze-concept everywhere. When you do that, what do you get? What you harvest is an army of the miseducated, or the under-educated or even the uneducable. This odious collage will soon file out de-civilizing humanity. That should explain how the North bred its current leaders – gentlemen who break bridges of peace with ease.

The North’s cup is full. It is facing the consequences of its hereditary “almajiri” leadership. The long years of North’s mistreatment of its poor and the minorities have driven the chicken home to roost. The uneducated, the marginalized have become kings of the elite roads, the “kabiyesi”, abducting and releasing at will.

There is a competition of silence going on. Who is financing Boko Haram and fueling their vehicles of violence? Silence! A Dapchi girl was reported by The Guardian of UK saying she and her colleagues were “flown in planes and taken over rivers in boats” on their way back to freedom. Whose plane? Which airport? Silence!

The pursuit of silence, argues George Prochnik, “begins with a surrender of the chase; the abandonment of efforts to impose our will and visions on the world.” So many things happen same time – or rapidly, one after the other. And in the maze of the confusion, we drop the glove; we surrender.

What is the need struggling with a Nigeria that is beyond repairs? With every change or solution comes an even bigger headache. Boko Haram used to enter villages and spill blood; now they enter and shake hands.

They used to abduct and marry off or sell girls; now they return the girls intact, free of charge – without ransom. We thought Boko Haram was enough; now we know there is something more mobile everywhere called herdsmen; Danjuma called them ‘armed bandits’ with official cover.

These ones know no geography – everywhere is their land of claim and blood. They are powerful and untouchable. Even police officers are afraid to call them by their names. They are spelled and pronounced in silence. And after the massive noise of Chibok, we thought nothing gross like that would ever happen again. But it happened; Dapchi happened – a clone of its inglorious precursor, but the noise was muffled. From abroad, interest in this version of Chibok was weak. The vocal cords lost their strength because this is 2018 Nigeria where noise is a crime.

President Muhammadu Buhari is Life Patron of MACBAN which sponsors the Fulani herdsmen militia. More than 70 victims of herdsmen killings were given mass burial in Makurdi, the state capital on Jan. 11, 2018

The core North sees nothing unhealthy peeing in the pool. It does this and serves the water to its thirsty minions. It also drinks from the pool showing off its magenta dentition.

The shameless elite of the North are interested only in power, money and virgins. They are not bothered about anything else.

The North’s life of disasters exposes other parts of the country to mortal dangers. But it doesn’t know it has any problem; it is drunken in the awesomeness of the powers it assumes it has. It won’t grow and won’t let others grow.

The North is acutely stunted in form and content and you wonder why?  And the Northern elite still tell us others cannot live without them. Did you not hear Ibrahim Coomassie of the Arewa Consultative Forum (ACF) proclaiming his people’s indispensability?

The South cannot survive without the North, he says. Why should blood-soaked Afghanistan declare itself indispensable to its sane neighbors?

When was the last time the North gave Nigeria a reason to smile? It is a vast lake of blood; a field of senseless deaths; a world of unusual disasters; a parade of scented ugliness; a diseased region. And what do experts do with ailments that have no known cure?

Unfortunately, the healthy South is a helpless detainee in the North’s leper colony. Greedy leaders have made the South an abductee of Lugard’s “well-conducted youth” of 1914. Bonded victims of the Fulani North can’t be free; they will die with this dying North.