In a widely circulated video titled: “NIGERIA, A COUNTRY WHERE DREAMS DIE”, a young man narrates how his wonderfully packaged world-class medical facility dream which he had christened “Abuja medical city” died suddenly, in 2013 after he had committed so much money to put the package together and to make presentations to those in government in Abuja whom he thought would instantly embrace the project and run with it.

Unfortunately for this otherwise brilliant-sounding fellow, he was obviously oblivious of the dream-incinerating Unitary Constitution of Nigeria as he put his Abuja Medical City proposal together.

That costly ignorance must be the reason he described President Goodluck Jonathan as “docile” in his lamentation video.

That ignorance must be the reason he was unable to see the huge CEMETERY of dreams that Nigeria had been to tons of other brilliant initiatives and for which reason he was convinced that his brilliant proposition in the healthcare arena would fare better than its predecessors in the countless other spheres where Nigeria needed and still needs the injection of the kind of innovative idea and intervention his healthcare proposal represented.

As it is with this dead dream in health care, so is it with thousands of other dreams in electric power generation, critical infrastructure, including air and seaports, railways, industrial parks, manufacturing, housing, and a long list of other ordinarily viable and desirable ventures that ended up as dead dreams.

The problem was not President Jonathan nor any of his predecessors, or even his dumb, bigoted successor, Buhari. No!

The problem is the asphyxiating 68-Item Federal Exclusive Legislative List in the 1999 Constitution which locks down and locks out the federating states, capable corporations, institutions and individuals from a whole range of economic and developmental activities in Nigeria, centralizing and exclusively domiciling the powers and resources to deal with all the 68 subject matters on that Federal Exclusive Legislative List in the hands of an omnipotent but illicit and totally inefficient federal government.

Unitary Nigeria is the Monster that killed the dream of the Abuja Medical City.

That is the same Monster that killed all the other brilliant and laudable dead dreams across the economy and the country.

That is the very same Monster that is now about to kill the otherwise great dream on the African continent, called “Nigeria”

Ask Nigeria what happened to the breathtaking scientific innovations of the Republic of Biafra between 1967 and 1970. Ask Brother Ezekiel Izuogu what happened to the big dream that would have birthed an authentic beginning of made-in-Nigeria vehicles. Ask Brother Barth Nnaji what his experiences so have, so far, been in the heroic attempt to erect an electric power plant to resuscitate the dead Aba industrialization dreams. Ask Brother Innocent Chukwuma how close the dream of Innoson Motors came to being killed by Unitary Nigeria, but for President Jonathan’s intervention sought by Governor Peter Obi and facilitated by Ngozi Okonjo-Iweala.

As we mark the graves of the innumerable dead dreams that were killed by Unitary Nigeria, we must begin to brace up for the funeral procession of the dream-eating Unitary Nigeria itself as the MNN Alliance undertakers put the finishing touches to the internment of the rogue 1999 Constitution and the toxic dream-killer union it foists to retard national development. The funeral procession for Unitary Nigeria will be heralded by the Constitutional Force Majeure being deployed by the victims of Unitary Nigeria to take down the dream-killing Monster called “The 1999 Constitution”. Let those who have the capacity to reason join the inevitable task of self-extrication, even as those who prefer the folly of building their Nigeria on a damaged constitutional foundation continues in their obdurate march to another round of elections in 2023. 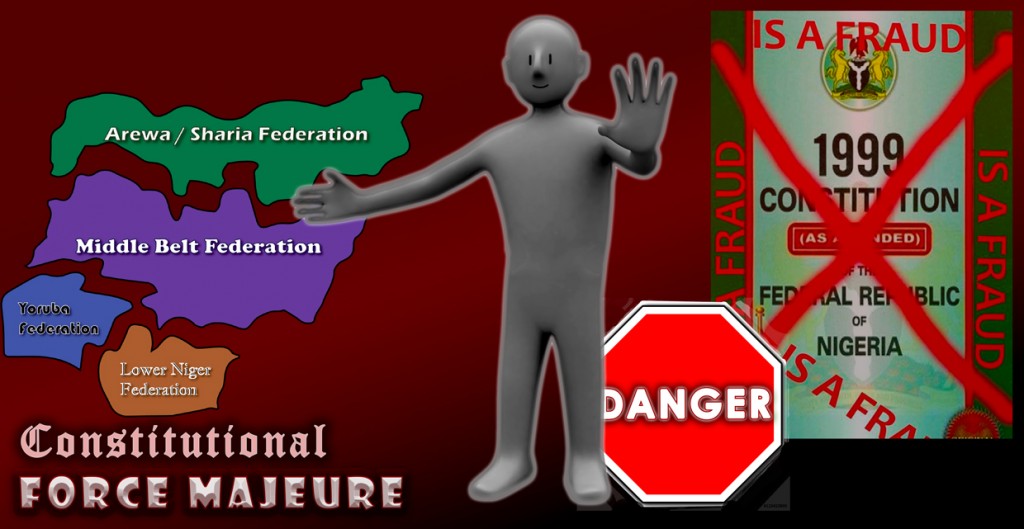 Constitution in a democracy is a property of the people who are stakeholders of the government. As a democracy, “We the People…” have the upper hand in deciding the supreme law of this nation, not an ethnic cabal.